Germany to host the 2015 Solheim Cup

It has been announced that Germany will play host to the 2015 Solheim Cup in 2015. St Leon-Rot Golf Club near Frankfurt will be the venue for the event between the best players from the Ladies European Tour and Ladies PGA Tour.

The St Leon-Rot Golf Club has hosted several world class amateur and proffesional events in the past including the Deutsche Bank SAP Open which Tiger Woods has won three times. The course boasts some of the very best practice facilties in Europe and 36 holes of Championship Golf. 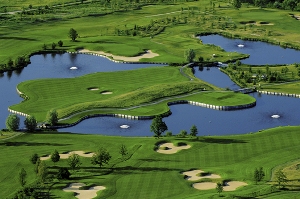 “We are delighted to be taking The 2015 Solheim Cup to Germany and to Golf Club St. Le

but also for developing the most talented juniors in Germany. The Ladies European Tour looks forward to working with all parties involved in the project to make the event a great success including the Deutsche Golf Federation and welcoming global

brands Allianz and SAP to the family of international partners which is a great endorsement of the profile of the event.”

"I can't wait for Germany to host the 2015 Solheim Cup. It will be a fantastic experience for our golf in Germany and its upcoming talents to witness the excitement of such a prestigious event like the Solheim Cup. I am sure my home country will be a great host.

The 2013 Solheim Cup will take place Aug. 13-18 at Colorado Golf Club in Parker, Colorado, USA. Europe are the defeanding champions, but the USA have won three of the past four clashes.

This announcement comes at a time when Womens Golf is going from strength to strength and is truly a Global game. Read Golfshake contributor Nick Bonfields thoughts on the future of Womens Golf: