Padraig Harrington completed some unfinished business in Bermuda yesterday when he used his Wilson Staff FG Tour V2 irons to win the prestigious PGA Grand Slam of Golf at the third attempt. 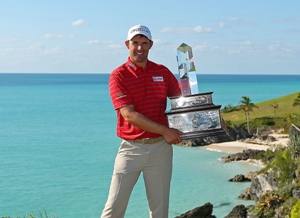 four-man field of champions by beating US Open champion Webb Simpson by a shot with rounds of 66 and 67 for a 9-under total at Port Royal Golf Club.

"It was unfinished business for me, having lost in two play-offs (2007 and 2008), so it was nice to come back and win," he said after becoming only the second European to win the title in 30 events, following Ian Woosnam in 1991. As a replacement for the injured Ernie Els, he held a two-shot lead over Masters winner Bubba Watson after the first round. Last year’s US PGA champion Keegan Bradley, who was replacing Rory McIlroy, tied for third with Watson.