Jack Singh-Brar of England posted a final round 72 to win the sixteenth Faldo Series Grand Final by two shots at Lough Erne Resort in Northern Ireland. It was a double success for England as Rochelle Morris won the girls overall title.

“I feel very happy about the result; especially knowing how Rory McIlroy and Yani Tseng’s careers took off following their 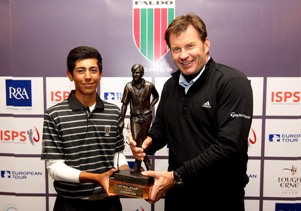 success in the Faldo Series,” said an elated Singh-Brar. The win has changed how I feel about myself, my life and my career as a golfer. Sir Nick Faldo is a great guy – obviously I knew of him and his majors already but The Faldo Series experience has made me appreciate his dedication to helping young golfers achieve their best.”

“Jack is a worthy champion having beaten our largest ever field,” commented Sir Nick Faldo.  “It is the support of our partners, including The R&A, ISPS, the European Tour and Lough Erne Resort, that allowed us to bring this level of opportunity to 84 competitors from 19 different nations this week and to more than 7,000 young people in 28 countries worldwide each year.”

15-year-old Singh-Brar (Brockenhurst) carded one birdie and one bogey in a composed level par round of 72 to finish on six over and two ahead of Rochelle Morris and Scotland’s Ewan Scott (St Andrews) who won the Boys’ Under-18 title.  Overnight leader Assaf Cohen, 18, who started one ahead of the field and four ahead of Singh-Brar, struggled to a 79 and finished in a tie for fourth.

17-year-old Morris (Huddersfield) was crowned Faldo Series Girls’ Champion following a final round of 77 in testing conditions.  Sophie Keech (Lyme Regis), 16, finished six shots behind but won the Girls’ Under-16 title, having come fourth in 2011.  England’s Robert Busher (Salisbury and South Wilts) won the Boys’ Under-21 title despite a stuttering finish under intense pressure.

Faldo Series Champions Singh-Brar and Morris will be offered a start in a professional Tour event.  They will also be invited by Faldo to the seventh Asia Grand Final at Mission Hills Golf Club in China next March, as will Busher, Scott and Keech.

A record field for a Faldo Series Europe Grand Final was in Northern Ireland for the tournament’s sixteenth edition.  84 golfers from 19 countries joined the six-time Major winner at Lough Erne Resort for the 54-hole World Amateur Golf Ranking event.

Off the course players aged 12 to 21 received expert advice from the British PGA, including a seminar on careers in golf, and from Faldo’s personal coach, Keith Wood.  Faldo was on hand all week to spend time with the competitors, including several clinics and Q&A sessions, and to host a grass-roots initiative for local school children.