The Ricoh Women’s British Open is just one week away and 124 of the 144 players are now confirmed for the 2012 Championship at The Royal Liverpool Club, Hoylake, from the 13th to 16th September.

The youngest competitor will be the amazing 15 year old amateur, Lydia Ko, who astounded golf observers when she won last month’s CN Canadian Women’s Open against a stellar field of the top ranked players. Seven-time Major winner Julie Inkster is the field’s oldest competitor after being granted a special exemption as she returns from surgery on her elbow. With 31 wins in a career spanning nearly 30 years, she has enjoyed more wins in Solheim Cup matches than any American 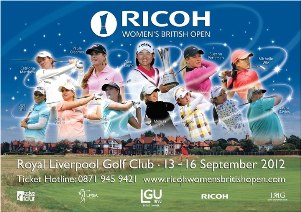 and is a member of the Hall of Fame. She is looking to cap her career with her first win at the Ricoh Women’s British Open, the only major missing from her resume.

Lydia Ko, who also won the 2012 US Amateur Championship in August, commented, I have had an amazing summer and I feel like it can only get better. I can’t wait to get to England to play in my first Ricoh Women’s British Open.  I played in the Astor Trophy at Lytham last year so I have some experience playing golf in the North West of England but I am already thinking of what shots I will need to play at Hoylake.

There are 21 Major Champions in the line-up boasting 41 Major Championships between them. Heading the list is defending Champion, Yani Tseng, the World Number No. 1 who is looking to win her first Major title since winning the Championship at Carnoustie last year and her third Ricoh Women’s British Open. Home favourites, Laura Davies, Catriona Matthew and Karen Stupples are each looking to win the title for a second time while Ricoh ambassador and 2012 US Open Champion, Paula Creamer, Kraft Nabisco Champion, Stacy Lewis and 2010 LPGA Champion Cristie Kerr will be trying to land the first American women’s Major win of the year. The three Major Champions of 2012 - Sun Young Yoo, Shan Shan Feng and Na Yeon Choi - will all be hoping to claim their second Major title of their careers.

With 20 players still to claim their place, there are already 26 nations represented amongst the 124 fully exempt players with the biggest challenge coming from the American team with 36 representatives on the entry list. Korea claims the second biggest contingent with 21 players already confirmed in the field while the home challenge is 13- strong with many more hoping to win through final Qualifying next week. Japan, the home of Ricoh’s head office, have eight players in the line-up including World Number five, Ai Miyazato and World Number 11, Mika Miyazato.

Shona Malcolm, the LGU’s CEO added, "This is already a wonderfully international field, rich in the world’s top women golfers and so many rising stars. We are looking forward to seeing which players will now battle their way through Final Qualifying to complete the field. Along with some experienced campaigners, there are a number of very talented teenagers entered including England’s Charlie Hull and China’s Ying Yan who have every chance of winning through at Caldy Golf Club next Monday to join the likes Lydia Ko and Lexi Thompson in making their debut at the 2012 Championship"

This year fans will again be able to watch the BBC’s extensive coverage of the Ricoh Women’s British Open in HD (high definition) underlining the significance of the Championship in the BBC’s sports portfolio.