Sir Nick Faldo and the Black Stork Golf Resort have announced an extension of their agreement which will see the Faldo Series return to Slovakia for the next three years. This year’s Faldo Series Slovakia Championship gets underway today with a record number of 83 participants. 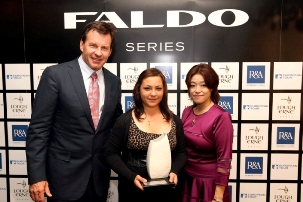 continue bringing more opportunity to young golfers across the country,” said Faldo. “I thank Sylvia Hruskova and Black Stork Golf Resort for sharing my vision and I look forward to spending time with this week’s winners at the Grand Final.”

“We are delighted to be extending our current agreement, ensuring the Faldo Series returns to Slovakia for the next three years,” added Sylvia Hruskova, General Manager of Black Stork in Velka Lomnica. “It is great to see how the young golfers improve year after year and how they are motivated by the chance to meet Sir Nick and compete in Northern Ireland.  Natalia’s experiences are a big motivation for them.”

With World Amateur Golf Ranking points on offer at Black Stork, golfers aged 12 to 21 will compete over three rounds in the Slovakia Championship this week (August 21-23).  The field includes Natalia Heckova, who last year became the first Slovakian to win a title at a Faldo Series Grand Final when she was crowned Girls’ Under-16 champion.  The 16-year-old’s win qualified her for the Asia Grand Final at Mission Hills Golf Club in China.

Five age-group winners this week – three boys and two girls – will qualify for the sixteenth Europe Grand Final, to be hosted by the six-time Major winner at Lough Erne Resort in Northern Ireland on September 11-13.