When Andres Romero arrived for his final round at The Open on Sunday he certainly received a few raised eyebrows not least from the R&A. On the bag was none other than Manchester City striker Carlos Tevez. Romero went on to shoot a 82.

Unhappy at the sight of an unshaven premier league footballer performing a professional role on the links was R&A Championship committee chairman Jim McArthur. He said:

"I think we may need to look at this particular case,"

"The strange thing for me was he never put the bag down so when he was standing on the green he was carrying the bag all over the place. It's just absolute madness.

"Maybe it's something we need to just have a look at," McArthur added. "We do normally get a list of caddies at the beginning of the week and we take that into account."

More cautious in his appraisal of the situation was R&A Chief executive Peter Dawson:

"It's not for me to say anything about players' choice of caddie as long as they behave in the best traditions of the championship and within the rules,"

"For all I know Mr Tevez may be a very experienced caddie. I've got no information as to his background.

"But whether it's the player's fault or the caddie's fault that the score was so high, I couldn't possibly comment," Dawson said poking a little fun at the situation.

"It was pretty interesting, I thought, because of the big crowd following the group, that golf fans and football fans may overlap a little more than I had realized. It's not a bad thing, perhaps."

Whether we see any more Premier League footballers gracing the links again is uncertain but it has to be noted that Tevez at least saw this game through, although it is unlikely judging from Romero's performance we will see a Tevez career change. 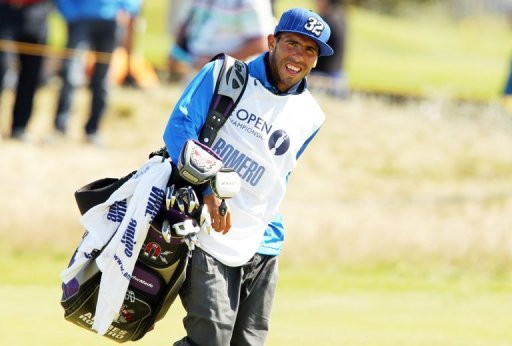