We've all heard the saying 'drive for show, putt for dough' but have you 'Got the vibe' ?

GOTtheVibe is an innovative patented damper device fitted into the shaft of any putter developed by Dave Hicks Putting (DHP).  GOTtheVibe works by reducing vibrations in the putter head increasing the size of the sweet spot and dramatically increasing feel which results in improved confidence, accuracy and distance control and has been known to save up to 5 putts strokes in a round.

Whilst DHP is a relatively young company, Dave Hicks, the man behind DHP, has been designing custom fit putter technology and putter designs for over 10 years coming from a background in military and aerospace engineering.

Golfshake member and 20 handicap Matt Holbrook recently got fitted for the Vibe and here's how he got on. 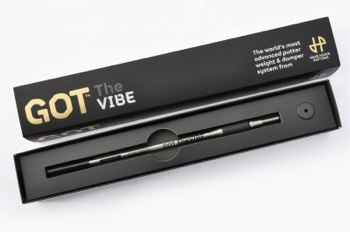 As someone who has struggled with my putting recently I was a very keen reader of tweets and posts from Dave Hicks putting in regards to their product 'GOTtheVibe' and how it could save up to 5 shots off a round.

Upon visiting the Dave Hicks Putting stand at the recent Golf Live event I was talked through how it works and how it's fitted into your existing putter shaft.

A small hole is cut into the top of your putter grip, the inside of the shaft is cleaned and lubricated and then the 'damper device' is inserted into the shaft of your putter where it sits. It's fitted under compression to unsure it does not fall out and a small bung fitted to the end of the grip to cover the hole.

What the damper does is reduces the vibrations with the putter at impact therefore making your 'sweet spot' bigger leading to better distant control, accuracy and confidence.

Straight away I felt confident with it. Subconsciously knowing it was in there made me feel better when standing over a putt and putting from a distance I felt a much smoother contact.

Testing the 'GOTtheVibe', over 6 rounds before and after having it fitted, the results were definitely backed up my stats and I felt a lot more confident in my putting.  Over my test period I improved by putting by almost 2 strokes per round and through the putting stats provided on Golfshake improved in all categories which showed the condidence and accuracy achieved through use of the 'GOTtheVibe'

Dave Hicks Putting claim it may save you 5 shot per round and overall I'd tend to agree and look forward to improving my putting even more over the 2012 season.

At a price of £55 "making you a better putter by making your putter better" it's a solid investment and I'd rate 9/10.

For more information on 'GOTtheVibe' as well as DHP custom putters and the Vibe Series Putters, which all come fitted as standard with the GOTtheVibe, visit: www.davehicksputting.com