Another week has passed and, yet again, it can legitimately claim to be labelled as the best of the 2012 season to date.

Thus far, the new season has seen unparalleled drama and excitement, contributing to the changing internal and external perceptions of the game. Golf is no longer considered as a game played by overweight  forty-somethings, rather an increasingly youthful sport where fitness, power and athleticism are contributing factors to a new  vibrant and dynamic golfing landscape.

On the European Tour, one of the veterans of the game played some of the best golf of his esteemed career to win the Commercialbank Qatar Masters presented by Dolphin Energy.

In the States, one man’s joy was another man’s anguish as a final round collapse facilitated a first time victory for one of the game’s hottest prospects.

Paul Lawrie rolled back the years to move clear of the pack with a serene, bogey-free final round 65 in the desert.

In an incredible show of resilience, Kyle Stanley put the horrors of last week behind him to win in Phoenix. He will empathise with the 54-hole leader, Spencer Levin, who equalled a PGA Tour record by losing a six shot lead going into the final round.

Glory for Lawrie in Qatar 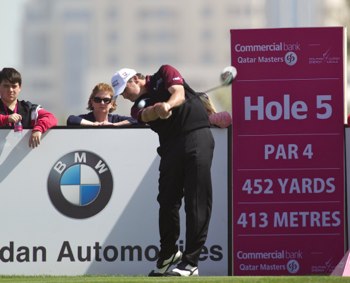 1999 Open Champion Paul Lawrie played a flawless final round of golf to win the Commercialbank Qatar Masters presented by Dolphin Energy by four shots from Jason Day and Peter Hanson.

Heading into the final round tied for the lead, the 43-year-old looked unbeatable as Sky’s commentary team declared that they had never seen him play such fine golf.

Lawrie was in and around the lead all week long in a tournament that was reduced to 54-holes because of heavy winds and sandstorms.

It was, however, Spaniard Gonzalo Fernández-Castaño that owned the first round lead; birdies at his final three holes led to a first-round 66 that left him one clear of the outlandish American John Daly.

Daly opened with a 67 at the Doha Golf Club, but fell back in a second round that was eventually postponed for the day.

In truth, it wasn’t fair on Friday’s early starters. When the second round resumed on Saturday, conditions were much more benign, and players such as Lawrie, Swede Peter Hanson and Belgian Nicholas Colsaerts rose to the top of the leaderboard.

The final round challenge, though, came from those further back in the pack. Jason Day, four-under-par after two rounds, started the third and final round with four birdies in a row to put significant early pressure on Lawrie. Sergio Garcia was also doing his best to overhaul the Scotsman, and did so after a birdie on his tenth hole propelled him to ten-under-par and six under for his final round.

Lawrie was unperturbed, and responded with a glorious eagle three at the par-5 9th to restore his advantage. Garcia subsequently fell back with bogeys on 13 and 15, and it looked as if Day’s challenge was over after bogeys at six and nine.

The tenacious Australian never gives up, however, and repeated his opening to the front nine with four consecutive birdies from the tenth. He had reached ten-under-par by the fourteenth, seemingly alone in applying pressure to Lawrie on the back nine.

The veteran showed no signs of faltering, though, and picked up further shots at 11, 14, 16 and 17 to ease into a four shot lead on fifteen-under-par. Hanson holed his second for eagle at 17, but it was too little too late, and with Day only managing to find one more birdie coming home, Lawrie was crowned champion.

With victory, Lawrie recorded his second victory in as many seasons, and looks to be in the form of his life. He has started 2012 with aplomb, finishing tenth at the Volvo Golf Champions and eighth the week before last in Abu Dhabi. He ended 2011 with a second place finish at the Dubai World Championship and heads to Dubai next week in the highest of spirits.

Stanley bounces back in Arizona

He triumphed by one shot from the tediously slow Ben Crane in a performance that attracted praise from everyone associated with the game, matching Lawrie’s fifteen-under-par total.

The remarkably consistent and talented Webb Simpson, along with Bo Van Pelt and Spencer Levin, opened with six-under-par 65s at the TPC Scottsdale. They trailed by one shot from Jason Dufner, who threw away a five shot lead at the 2011 PGA Championship, after round one.

Even with some big names, such as the aforementioned Simpson and Bubba Watson, in the mix, Friday and Saturday belonged to Levin. He fired a second round 63 and a third round 68 to lead by six shots with one round to play.

He started well, and led by seven strokes after Simpson bogeyed the first hole. His first birdie of the day came at the par-5 3rd hole, but the gap had already been closed to four courtesy of Ben Crane. The American came flying out of the blocks to be four-under-par for the round after just four holes. Stanley had also started well, and reached the turn on twelve-under-par, three behind Levin who had bogeyed four and six.

Stanley picked up further shots at 11, 13 and 14, finding himself with a two shot lead after Crane bogeyed 16 and Levin made double at the par-5 15th. Crane found a birdie three at 17 to reduce the deficit to one shot, but both parred the last. Levin failed to hole his second from the fairway bunker at 18, handing Stanley the title. Levin has yet to win on Tour and will be absolutely devastated as events from the previous Sunday tragically repeated themselves.

Stanley said:  “I'm kind of at a loss for words. I'm very grateful for the support I've gotten. It's unbelievable.” Alluding to Levin’s collapse, he added: “I really feel for him, experiencing that.”

Next week, a world-class field will be amassed at the Dubai Desert Classic where Álvaro Quirós will defend, and Tiger Woods makes his first PGA Tour start of the season at the AT&T National Pro-Am at Pebble Beach.