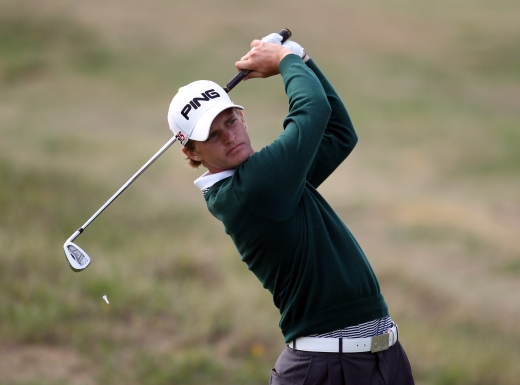 As Tom Lewis turns 21 this week, his father Bryan couldn’t be more proud of the newly crowned European Tour rookie of the year after an amazing 2011.

The younger Lewis was given the accolade in December to round off a memorable year, which included sharing the lead after the first round of the Open, helping GB&I to Walker Cup victory and claiming his maiden title on just his third attempt in Portugal.

Bryan Lewis, who grew up alongside Sir Nick Faldo in Welwyn Garden City, still had a wide smile on his face as he gleefully reflected on his son’s early achievements on the course.

But Bryan insists that he takes more pride Tom’s development off the course, and says the sacrifices that he and his wife Lynda have made are just part of being parents.

“In truth, I’m more proud of him as a person, the golf isn’t that relevant really.” Bryan admitted.

“He as a person is what makes me proud, because he’s a nice boy with good values.

“The fact that he’s good at golf is no different to a guy who’s a good electrician or a good doctor. The golf part of it isn’t the relevance.

“The way he conducts himself and the way he’s approached it all has been very professional. That’s what makes me proud.
“I think every parent sacrifices for their kids - you do what you think is right for your children. It’s not a sacrifice it’s called being a parent.”

The elder Lewis, who played a couple of European Tour seasons before becoming a club pro, was too nervous to watch, as his son shot a marvellous five-under 65 to share the lead with Thomas Bjorn after the first round of Open last July.

By carding the lowest score ever by an amateur in the Open’s 140-year history, Tom went being virtually unknown in the sporting world, to appearing on the back pages of every national newspaper the next morning.

Excellent exposure for the young man of course, but Bryan, just like his son, had no trouble in remaining stable; not getting carried away with the media spotlight.

“A lot of good came out of it as it raised awareness. He’s also got a lot of confidence out of it but you do scratch your head with it.

“It was a bit ridiculous wasn’t it?” he said in response to his son’s overnight rise to fame.

“It was surreal really, a bit over the top. People had to remember that it was a four-round tournament.”

But just a few months later, Lewis jnr proved that his Silver Medal win at the Open was not just a fluke. On just his third professional start, he claimed victory at the Portugal Masters.

And despite the fact that Tom had won a tournament quicker than the likes of Tiger Woods and Rory McIlroy, his father was not surprised at his instant success.
“I wasn’t really surprised to see him win so early,” Bryan admitted.

“The plan was that he’d get seven starts before Christmas and seven afterwards. With fourteen events, if you’re any good you’ll get in contention.

“It was brilliant but I wasn’t so surprised because I had said to my wife when I was in Portugal in the beginning of the week that I knew he’d win.

“I saw him on the practice rounds and I knew he’d win sooner or later – whether it was that week, next month of next year.

“You could see he was good enough to win but sometimes you just need some things to go in your favour a little bit.”

And with the new calendar year open us, golf fans and golfers alike will be looking ahead to the 2012 majors.

However, major tournaments aren’t spoken about much in the Lewis household as Bryan claims that every tournament should be treated the same.

“We don’t talk about majors, just each tournament when it comes along,” Bryan explained.

“The biggest problem people have is that they treat the majors differently. You can’t tell when you will play well.

“Had Tom played in the Open how he did in Portugal, I’m confident he could have done better. It’s only him verses the golf course.

“The fact it’s the English Open or the Spanish Open is irrelevant - we’ve tried really hard not to differentiate between a major and a tournament.

“All you can do is play golf and when you play well, you play well. If it’s on the week of a major, then brilliant, but we wouldn’t prepare any differently for the majors.”

And you wouldn’t bet against the younger Lewis, especially with the expertise and encouragement from his father, to play well in 2012 as new challenges lie ahead.