Ewen Ferguson Player Profile And What's In The Bag

EWEN Ferguson shot a final-round 69 to complete a wire-to-wire victory at the ISPS Handa World Invitational at Galgorm Castle Golf Club - his second win of the year.

He said: "It feels unbelievable. I just can't believe how calm I was out there. It couldn't have worked out any better playing with Connor. I felt although I played with him the first two days and he was playing so, so good, and I felt he was my main rival for the day, so managing to play with him and hold each other off and keep up with each other was so good. Just can't believe I'm a winner again.”

The Scot started the week by firing a course-record 61 - his second such score in two weeks - and held in his nerve to win the event by three shots after finishing on 12 under par.

In the women's competition, Sweden's Maja Stark finished on top.

The separate tournaments on the same two courses - Galgorm and Massareene - held equal prize funds of $1.5million each with US$250,000 for each winner.

Ferguson, the Commercial Bank Qatar Masters winner earlier this year, led by three overnight and stretched his advantage with a birdie at the driveable par-four second. 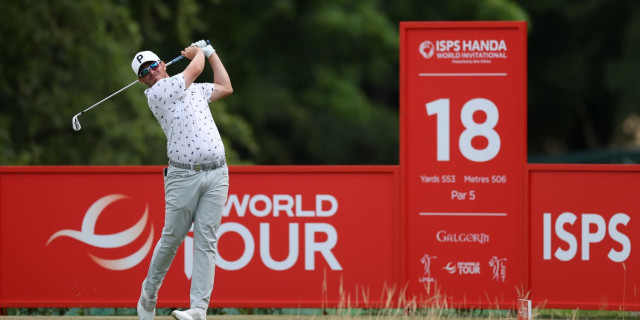 He gave the shot straight back at the third after finding a fairway bunker with his tee shot and Richard Mansell moved to within two thanks to three birdies in his first seven holes.

Ferguson hit back straight away, knocking his approach at the fourth to three feet and sinking the putt for birdie only for Mansell to keep the foot down with a birdie at the eighth.

The Englishman got to within one when he birdied the par-five 10th despite finding the rough left of the green with his second, while Renato Paratore, who started at the tenth, charged up the leaderboard.

Ferguson came back to Mansell's mark of 11 under when his wayward drive at the ninth left him no way of reaching the green and the pair were just two ahead of Paratore. Spaniard Borja Virto was also in contention at 10 under and Connor Syme was lurking.

Ferguson took back the lead by nailing a nine-feet putt for a birdie at the tenth and he was four better off than Paratore, who set the clubhouse lead at eight under after signing for a 64.

A birdie at 13, his fourth in five holes, took Virto to within a shot and he was the closest challenger after Mansell's tee shot at 15 found the hazard and he gave one back.

But the Spaniard's charge was halted at just the wrong time, a bad miss from the tee at the par-three 14th led to a bogey and Ferguson's cushion was two shots again.

Ferguson parred every hole after his birdie at 10 and it was enough for a three-shot victory with Virto and Syme joint second.

There was a four-way tie for the lead and a bunched-up chasing pack early in the final round of the women's event but it was Stark who took the tournament by the scruff of the neck with six birdies on the front nine.

She turned with a three-shot lead and added four more birdies for a course-record 63, 20-under total and five-shot triumph.

She said: "I don't think it's landed yet. I'm just feeling so nervous. All day, I was just kind of reminding myself to be calm and take it one shot at a time. But it's been easier said than done.

Who is Ewen Ferguson?

Ferguson was born in Glasgow in July 1996. He won the British Boys and Scottish Boys Championships in 2013 and represented GB&I at the Walker Cup in 2015. He turned professional in 2016 and competed on the Challenge Tour in 2018 and 2019. In 2021 he was a runner-up three times on the Challenge Tour and qualified for the DP World Tour. He won his maiden title, the Qatar Masters, in March 2022.

Ewen was dressed head toe in the latest AW22 PUMA Golf collection showcasing a classic style with a modern twist, paired with the IGNITE Articulate shoes which he wore throughout the week.