Ahead of this year's AIG Women's Open, the rise of Louise Duncan, who lit up last year's championship, has been captured in a new documentary that follows her journey from the amateur game to major contender.

‘Louise Duncan: Making The Cut’ is being aired by Sky Sports Golf at 8pm tonight (Monday 1 August) and can also be viewed on The R&A’s website as well as its YouTube channel.

The documentary goes behind-the-scenes on the Scot’s thrilling journey over the last 18 months, which saw her win the Women’s Amateur Championship in record-breaking fashion last June and go on to wow the home crowds and post a top-ten finish at the AIG Women’s Open at Carnoustie.

Exclusive contributions to the documentary are made by Duncan, former Women’s British Open Champion Georgia Hall and Dean Robertson, High Performance Golf Coach at the University of Stirling.

Martin Slumbers, Chief Executive of The R&A, and Louise’s mum, Alina, also feature in a unique feature on the life of a talented amateur golfer and what it takes to reach the higher echelons of the sport.

“I never tried to go professional as I didn’t think I was ever good enough,” admits Duncan in the documentary. “My dream is now to win a major championship, wherever that is. Doing it in Scotland would obviously be the dream come true.”

Hall, who played with Duncan in the first two rounds of the AIG Women’s Open at Carnoustie, added, “We had a lot of fun together. It was really nice to see someone so driven. She’s definitely one of the best I’ve ever played with.” 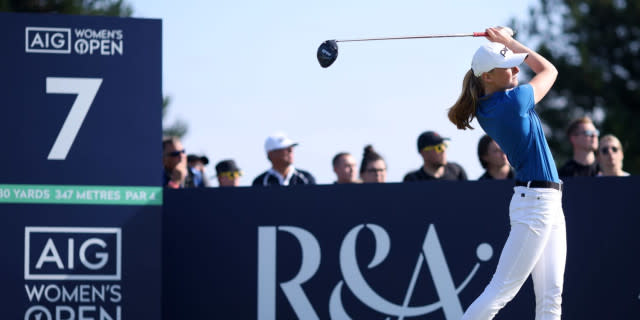 While balancing her studies at the University of Stirling and family challenges, The R&A Foundation Scholar has continued to progress - achieving a second Curtis Cup appearance for Great Britain and Ireland in June - and making her professional debut in last week’s Trust Golf Women’s Scottish Open at Dundonald Links.

The promising 22-year-old returns to the AIG Women’s Open at Muirfield this week after her exploits 12 months ago when she was only two strokes off the lead going into the final round.

Robertson says in the video feature; “Looking at how hard she worked and the skills that she was developing, particularly with the driver, you could start to see her emerging as a real talent. Every night she would be here on the practice area until it was dark.”

“You see it in the way they perform, particularly the amateurs,” added Slumbers of Duncan’s rise. “When they are ready to step up you can see it a mile off.”

Duncan sparked a wonderful summer last year when she defeated Iceland’s Johanna Lea Ludviksdottir at Kilmarnock (Barassie) 9&8 in the Women’s Amateur Championship Final - the largest winning margin in history - to become the first Scottish champion since Alison Rose in 1997.

The West Kilbride member then shone at the AIG Women’s Open to win the Smyth Salver as low amateur playing against world-class professionals for the first time - and is now looking forward to her own successful pro career.

The AIG Women’s Open takes place this week from 4–7 August at Muirfield, with tickets on sale via aigwomensopen.com.

Adult tickets start from £40 with children aged under 16 years old admitted free of charge. Spectators aged 16-24 years old will be entitled to purchase youth tickets starting from £20. A £5 Mastercard discount is available once per person.

Hospitality options are on sale with further information available at www.aigwomensopen.com/championsclub.