Are Mixed Gender Tour Events The Future of Professional Golf

LINN GRANT’S astonishing victory at the Scandinavian Mixed in Sweden has reopened the debate about the disparity in prize money between men’s and women’s golf. Grant went head to head with some of Europe’s best male golfers and beat them all.

She became the first woman to register a victory against the men on the DP World Tour – and did so by nine shots. There was no luck involved. She simply outplayed them all.

And the Swede collected an impressive $360,000 for her efforts, far and away the biggest prize she has banked.

There is a massive difference in prize money involved in men’s and women’s golf. On the PGA Tour, tournament winners routinely collect cheques in excess of $1.4m for winning run-of-the-mill events.

Much of this is down to TV exposure. The PGA Tour and DP World Tour feature on Sky Sports in this country, while major TV networks show PGA Tour events in prime-time in America. Women’s golf simply doesn’t get that kind of coverage, often restricted to the red button at best, and therefore fails to attract the sort of sponsors and crowds that would change things.

So what’s the answer?

English golfer Bronte Law believes women’s golf could gain a huge boost if it emulated tennis and staged tournaments alongside the men.

Law described Grant’s victory as a fantastic achievement but also believes the women’s game can work in tandem with men’s golf. 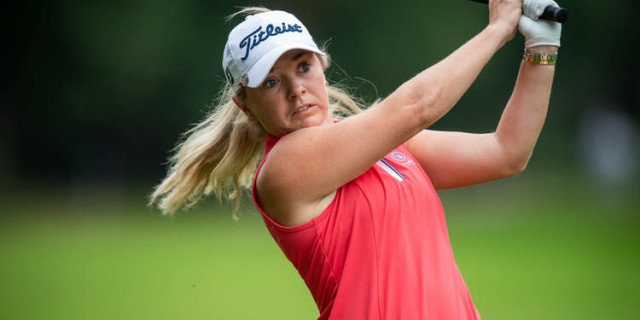 Law, 27, said: “The perfect example is tennis. Why do the women get paid more than we do? The reason is because they play on the same site and they get the same media coverage.

“So if we can play at the same course, get the same TV coverage, there’s no reason why our purses can’t increase.”

Law is a member of the Ladies European Tour, which was on its knees until Aramco came along and poured an additional $5million into the prize pot.

She said: “The LET was not really in the strongest position when Aramco got involved and they have added $5 million to the prize fund of total purse for the year.

“They have provided six events and the money has been life-changing. And to be part of a team - they would probably not get that opportunity. It's nice to be part of a team. We obviously play a lot as individuals throughout the year and it can get quite mundane after a while.”

Keith Pelley, commissioner of the DP World Tour, has been responsible for all sorts of innovations and has been a key player in encouraging mixed tournaments, and it may well be the way forward.

But just how realistic would it be for men and women to play alongside each other in the majors?

The Open and US Open have fields of 156. Would the R&A and USGA be prepared to cut that in half in order to accommodate the women? Hmmm….probably not.

But is there anything to prevent The Masters being followed the next week by a tournament at Augusta featuring the world’s women golfers? Why couldn’t St Andrews host The Open in July followed by the women’s equivalent the next week? This would see men and women playing on exactly the same courses.

Another option may be to open up some spaces in the field for an elite group of women to take part. Grant proved that it is possible for a woman to compete with and beat men. However, she did so from forward tees. If the men’s majors were to allow women to compete, it stands to reason that they would have to play exactly the same course as their male competitors.

It is a fascinating debate and there are no easy answers, but it is surely time that something is done to raise the profile of women’s golf, and taking on the men’s best players on equal terms is the only way that is going to happen.