GET ready for a media feeding frenzy as Phil Mickelson emerges from his self-imposed exile as the highest-profile player in the 48-man field for the inaugural LIV Invitational at Centurion Golf Club in St Albans.

Mickelson has not been seen in public since February, when it emerged that he had been bad-mouthing the very Saudi regime that is now paying him an unimaginable fortune to play in eight tournaments. He also accused the PGA Tour of being greedy.

But all, apparently, is now forgiven. If Mickelson is hoping for a quiet return to the game then he is in for an unpleasant surprise because the spotlight is going to be firmly on him all week.

Mickelson is making all the right noises. In a statement, he said: “I want to again apologise to the many people I offended and hurt with my comments a few months ago.

“Taking time away and self-reflecting has been very humbling. I have been engaged in continued therapy and I feel healthy and much more at peace.

“I realise I still have a long way to go but I am embracing the work ahead. I am ready to come back to play the game I love but after 32 years, this new path is a fresh start.” 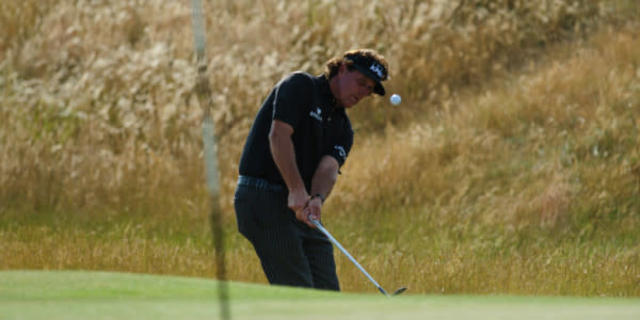 Ironically, Greg Norman and his Saudi paymasters will probably be secretly delighted because Mickelson's appearance guarantees the sort of publicity they could only have dreamt of.

Norman also revealed that 15-time major champion Tiger Woods rejected a mind-blowing sum to join Mickelson. It has been speculated that Woods was offered a figure in the region of $250m to take part.

Meanwhile there is a 54-hole golf tournament being staged.

Johnson is the highest-ranked player in the field but he has been on the slide over the past 10 months and is now world number 15. He is being paid at least $100m to appear in the eight events that will make up the LIV Series this year - and that's without the $4m first prize on offer for the winner at Centurion.

And who is going to have a $4m smile at the end of it all? Larrazabal has been in the form of his life this season and enjoys playing on English soil. Horsfield also returned to the winners’ circle, claiming the Soul Open in some style. He also finished in a tie for fourth at the Dubai Desert Classic and 21st at the British Masters.

Talor Gooch has been enjoying a wonderful season on the PGA Tour. He won the RSM Classic in November and has reeled off 12 top-25 finishes. He is now ranked 35th in the world and is 13th in the FedEx Cup standings.

The field is stronger than many thought it was going to be. Pablo Larrazabal won the ISPS Handa Championship in Spain, finished in a tie for fifth at the Qatar Masters and was 13th at the Catalunya Championship. Talor Gooch has been in outstanding form on the PGA Tour, with a victory and a whole host of top-25 finishes. And Sam Horsfield recently won in Belgium and looks to be back to his best.

Centurion opened in 2013 and measures just 7,100 yards. It features plenty of pine trees but the fairways are pretty generous so we can expect to see some pretty low scoring. It has a heathland feel. Many of the greens are undulating and there are plenty of deep green side bunkers and some water hazards to be avoided.

Talor Gooch. If he can adapt to English conditions he may be hard to beat

Pablo Larrazabal. Having a wonderful season.

Phil Mickelson. Will be difficult for anybody to take their eyes off him

HOW YOU CAN WATCH:

From 2pm on Thursday, June 9, you will be able to watch on LIVGolf.com, YouTube and Facebook. All 48 players will tee off simultaneously thanks to a shotgun start, so the entire day’s golf should be done and dusted in about five hours.