Five of The Best Golf Courses on The PGA Tour

Every week we tune in to see the world’s greatest golfers battling it out for striking trophies and eye-watering sums of money.

While the players deservedly take centre stage, without an array of impressive courses for them to showcase their talents and compete on, the entertainment value would be seriously lacking.

We have compiled a list of five courses that are part of the PGA Tour rotation that undoubtedly make the golfing calendar year all that sweeter.

We’ve opted not to include venues that have hosted major championships or Ryder Cups, which excludes the likes of Pebble Beach, Riviera, Muirfield Village and Quail Hollow; this is a shoutout to those complexes who get to spend just one week a year in the spotlight. 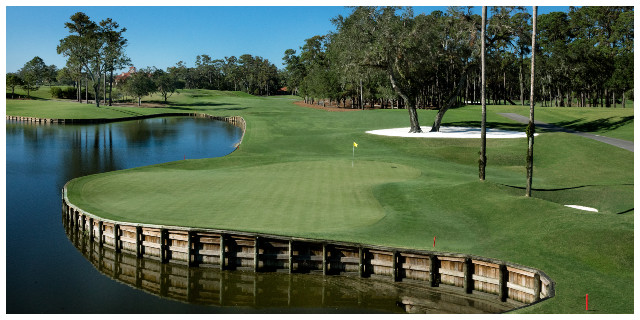 Perhaps the most iconic course on the PGA Tour, TPC Sawgrass is a revered venue that hosts the flagship event of the tour: The Players Championship. Renowned for being one of the most troubling courses in the world, the signature 17th is without doubt one of the greatest holes throughout the entire tour rotation. The resort boasts two courses - Stadium and Valley - and it is the former that hosts the aforementioned Players Championship. Commonly referred to as Pete Dye’s grandest design, this is a course that all of the world’s best tackle on an annual basis.

Originally, Dye had made the course too difficult which prompted comments from some of the tour’s players. However, in time for the following year, the architect made adjustments to the course and as a consequence, it became more playable. An 18-year-old Tiger Woods triumphed in the 1994 U.S. Amateur at Sawgrass, which marked the first of three consecutive victories. During the opening round of the 2007 edition of The Players, the wind was prevalent and the water surrounding the 17th green had consumed 50 golf balls - which broke the single-round tournament record of 45 that was set in 2000.

TPC Scottsdale is a very special place for professional golf and like Sawgrass, it is a 36-hole complex. The Stadium Course is the layout that is used for the annual Phoenix Open, since its inaugural year in 1987. Furthermore, the course was specifically constructed for that reason and both the architects - Tom Weiskopf and Jay Morrish - had built a modern Colosseum for the sport of golf. The course sits 1,530 feet above sea level and there is a particular hole that is worthy of its signature status.

The par-3 16th is the only hole that is fully enclosed throughout the entire PGA Tour rotation. What supplements the impressive design is the crowd that it attracts every year. The Phoenix Open holds the record for the highest attended PGA Tour event and the 16th hole is undoubtedly what entices bystanders back. If a golfer finds the green, they can be expected to be welcomed down with loud cheers and applause. Miss, however, and that walk will seem painfully longer with boos and whistles bellowing through the arena. Tiger Woods made a hole-in-one in this event during the 1997 edition and it is said that the crowd that were present continue to party today(!)

I can speak from experience here, having attended the final day of the 2020 Arnold Palmer Invitational. The complex contains three loops of nine holes: Champion, Challenger and Charger; the Champion and Challenger are what make up the 18 for the annual Arnold Palmer Invitational - which is one of only five invitational events on the PGA Tour. Commonly referred to as Dick Wilson’s greatest piece of work, he intentionally elevated the greens to improve both visibility and drainage, which has resulted in this becoming a preferred event for the tour members.

Arnold Palmer gained ownership of the premises in 1974 and Bay Hill has hosted the Arnold Palmer Invitational since 1979. While there are many memorable holes from the 18 that the professionals play, the par-5 6th provides the most excitement and danger as players are effectively given freedom in regard to how much of the water they would take off. Bryson DeChambeau famously drove the ball 377 yards on this hole during the final round of the 2021 edition before seeing off Lee Westwood to secure this prestigious title.

Pete Dye designed this immaculate golf course in 1967, enlisting then touring professional Jack Nicklaus for his greatly valued wisdom. Harbour Town Links is one of three courses at Sea Pines Resort and Dye is responsible for the design of two of them. Harbour Town measures 7,099 yards from the tips, which is considered a short course for PGA Tour standards, but the difficulty does not lie in the distance. Dye had effectively constructed a tight golf course that demands intelligent thinking and the clever use of shot making decisions.

Water dominates the layout and this is especially true for holes 4, 8, 14, 17, and 18 where any errant tee shots will most likely end up wet. The greens are small in size, averaging just 3,700 sq compared to the tour’s average of 6,600 sq. The signature hole, the par-4 18th, is a wonderful finish that reeks of danger from both the left and the right off the tee. Once in play, the gorgeous red-and-white-striped lighthouse sits beautifully in the background, often providing a good target for approach shots into the final green.

TPC River Highlands was founded in 1928 and was then known as Middletown Golf Club before transitioning into Edgewood Country Club in 1934. The PGA Tour acquired ownership of the course in the early 1980s and enlisted Pete Dye to redesign the course. The layout was tinkered with one final time in 1989, this time by Bobby Weed, where the name TPC River Highlands was settled upon. This is a favoured event and course by professionals and it holds historical interest. Jim Furyk holds not only the course record, but the lowest score in PGA Tour history after a scintillating 58 during the 2016 edition - Patrick Cantlay had held the course record previously, shooting 60 in 2011 as a 19-year-old.

Over the last decade, longer hitters have typically done well - winning six of ten events. This event is the second-most-attended tournament on the PGA Tour, ranking only behind the aforementioned Phoenix Open. It’s difficult to identify a singular signature hole, but the players who play the course on an annual basis refer to the final stretch as one of the best in the world. A driveable par-4 invites players to locate the green on hole 15 before they head to the scenic par-3 16th. Following this are two tricky par-4s, with the 17th requiring an excellent approach shot. Finally, the 18th is surrounded by the biggest crowd of the course - which could be difficult if you’re leading by one!

There’s five of the very best (which haven't hosted a major or the Ryder Cup) that the PGA Tour have to offer - have we missed any of your favourites out?