PING have unveiled their latest irons, with the PING i59 being showcased on tour by Viktor Hovland for the previous few months. PING have employed a patent-pending technology, known as AlumICore, to create the forged blades that deliver on look, feel and trajectory control.

These irons are preferred by better players yet there is plenty of forgiveness packed into these weapons. The custom-built i59 irons are now available for fittings at authorised Ping retailers worldwide. 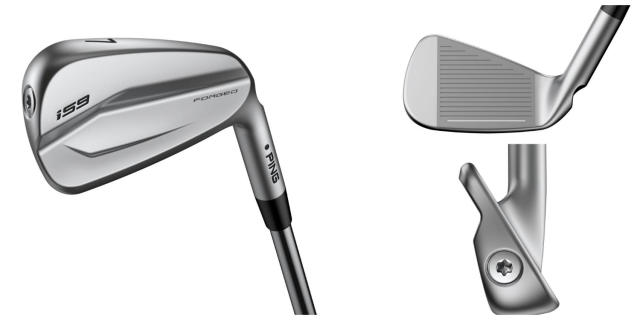 “There’s been a lot of anticipation for the i59 iron since we took them out on tour a few months ago, so we’re very excited to bring them to golfers around the world,” said John K. Solheim, PING’s president.

“It’s a true blade on the outside, but inside it’s like nothing ever engineered in golf equipment. Our team took on the challenge of disrupting an iron category that traditionally has lacked a lot of performance innovation and developed an iron unlike any other.

“Once golfers hit it, they’ll be pleasantly surprised by its versatility. The i59 will clearly appeal to better golfers but the combination of forgiveness and clean appearance will attract golfers of all skill levels.”

An aerospace-grad aluminium has allowed an estimated 30 grams of material from the centre of the club to be redistributed to the perimeter, which has elevated the MOI to match the larger PING i210 irons.

Each iron in the set is unique, as it requires a different size aluminium core. Through this, precision has been improved as a consequence of this manufacturing process.

The final result is ultimate forgiveness in a forged iron. You’ll also experience a crisp and compact feel at impact which will help to deliver a lower launch and further enhanced trajectory control that is expected from a blade design.

Solheim noted: “We all know this type of player may not put forgiveness at the top of their list when considering their iron choice, so we engineered it in a way that increased the MOI in a clean and impactful way.”

The precision-machined face of the irons also contain new MicroMax grooves for tighter spacing and a geometry that results in four extra grooves on each club. This helps to minimise fliers in the short irons while also preserving spin in the longer irons for better control and consistency.

“We love the challenge of improving groove performance. When golfers address the i59 iron, they’ll notice more grooves,” said Solheim. “We were able to accomplish this through our continuous research and experiments with different configurations to deliver the spin performance required for consistency and predictability from all conditions.”

During the construction of these irons, PING’s engineering team spent a substantial amount of time perfecting the manufacturing process.

“The i59 project pulled in our expertise from multiple disciplines without our engineering and innovation groups,” Solheim added.

“Once we had the idea to join the three parts together, we were challenged with scaling the complicated process within the manufacturing process. In collaboration with our suppliers, we developed highly-precise procedures that make the i59 the most technologically advanced iron we’ve ever manufactured.”