PING have unveiled their new wedges, the Glide Forged Pro collection. They have been specifically engineered for golfers who seek versatility and improved shot making inside 100 yards.  These wedges have been tour-inspired and the high-spinning design can be purchased in two grind profiles and multiple loft options to suit players who rely on precision and control.

They are custom-fit in addition to custom-built and they are available for pre-order at authorised PING retailers worldwide. 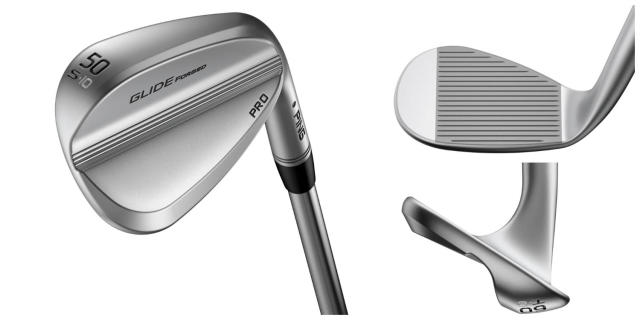 “When you look at the Glide Forged Pro wedge, everything about it stands out,” revealed John K. Solheim, Ping president.

“It’s a great looking club with amazing feel that performs beautifully. It has the versatility to attract and benefit a lot of different skills and our engineers focused on every design attribute.

“It’s slightly smaller heel-to-toe with a rounded profile to allow players the ability to control the club and play any shot with precision. We’ve also applied a new face blast to improve friction for increased spin and trajectory control.”

PING’s engineers have been in constant consultation with tour staff and brand ambassadors in an attempt to save as many shots as possible in and around the green.  The smaller heel-to-toe head has been forged from 8620 carbon steel and it helps to create a confident look at address – enabling the player to manipulate the head to help execute the intended shot.

Solheim noted: “We know golfers are very particular about the look of their wedges and that first impression when they look down is vitally important as to whether it makes it into their bag.

“The feedback from our players and coaches really helped guide the design of the Glide Forged Pro and it sets up perfectly behind the ball, giving you the confidence to pull off almost any shot.”

Working in combination with the precision-milled face and grooves is the new Emery face blast which adds more texture to the hitting surface.  As a consequence, higher friction will be created and more interaction between the club and ball to help with lower launch and further spin.

The 50° and 52° lofts feature wheel-cut grooves with a 20° sidewall to optimise performance on full shots.  The 54° to 62° options have been milled with a 28° sidewall and tighter radius for increased spin and precision on finesse shots around the green and from the bunkers.

Finally, the hydropearl 2.0 chrome finish adds to the higher spin and lower launch – which is particularly noticeable in wet and rough conditions.

“As great as these clubs look, it comes down to performance off the face,” said Solheim. “The new Emery blast makes a huge difference. The added spin and lower launch overall gives shot makers the control they need to enable the spin on full shots or take on the tough shots around the green.”

Although there are only two grind options, the multiple lofts expand the offerings to ensure that this wedge can match any playing conditions and angle of attack.

In the ‘’S’ grind there is moderate bounce combined with a rounded lead edge which will suit most golfers – it also comes in seven loft/bounce configurations.

The ‘T’ grind boasts a narrower sole with approximately 3° less bounce than the ‘S’, which will improve versatility and precision around the green.  This grind is available in three lofts – including 62° - and it will offer low bounce and high loft to get the ball stopping as quick as possible.

Additionally, there are eight custom grinds available through Ping Wrx, which is the company’s facility that custom builds the majority of tour and college equipment.

The PING EYE2 wedge face profile had inspired the ‘S’ grind 59° option, which is distinguished by the high-toe design made popular by Karsten Solheim’s iconic sand wedge that was developed and released in the early 1980s.  It features a blended hosel and a more traditional approach to the sole, considering its roughly 1.5° less bounce than the other ‘S’ grind lofts.

“I may be a little biased since my swimming pool as a kid was shaped like a PING EYE2 wedge, but I love the high-toe options in this line,” revealed Solheim. “It gives me the confidence and versatility to play high and low shots with a lot of spin without being intimidated – it’s especially good out of the bunker.”