WILL ZALATORIS didn’t win The Masters but he did earn a trip back to Augusta National in 2022 and he has moved in to the top 30 in the world rankings. Zalatoris handled himself like a veteran in finishing runner-up to Hideki Matsuyama and there is now huge interest in his progress, which continues this week when he makes his debut at the Wells Fargo Championship at Quail Hollow.

“I have wanted to be playing at this level my entire life,” he said. “Some people shy away from that, but I'm excited to be here. … There's no reason to feel intimidated now.”

Zalatoris didn’t even have a PGA Tour card at the start of the season. He failed to advance out of the first stage of Korn Ferry Tour Q-School in his first attempt. Two years ago he was ranked 1,514th in the world. A year ago, he was hovering around 500th in the ranking. He’s been on a rapid rise ever since the Korn Ferry Tour resumed after its Covid-induced lockdown, amassing 11 consecutive top-20 finishes on that circuit.

His success on the Korn Ferry Tour earned him a spot in last year’s U.S. Open and he hasn’t looked back since. A tied sixth finish at Winged Foot confirmed to Zalatoris that he could compete on the highest level.

“At the U.S. Open, he told me that on the third hole is when he realized that it was just like another a tournament,” said swing coach Troy Denton. “You could tell at the beginning of this week, he had a swagger. He just believes.”

Zalatoris led the field at Winged Foot in Strokes Gained: Approach and ranks fifth in that category this season. He made a hole-in-one in the U.S. Open’s opening round. And now his name comes into the equation for possible Ryder Cup selection. It proves that dreams can come true.

His iron play was spectacular at Augusta, a course that demands excellence when it comes to approach play  because of the importance of placing the ball on the correction portion of the sloping putting surfaces. Zalatoris is capable of launching high approach shots that land softly on those small sections. This is also a pre-requirement at Quail Hollow.

He was eight years old when he attended the 2005 Masters, watching Tiger Woods hole a 40-foot birdie putt. Later that week, he was sitting with his family in an  Italian restaurant when Woods holed his famous chip  at the 16th. The place exploded when the ball dropped, illustrating to a young Zalatoris just how important this tournament is.

He grew up alongside Jordan Spieth, who also finished second in his Masters debut seven years ago, and the sons of former PGA Championship winner Lanny Wadkins. He still remembers the wisdom that Wadkins shared years ago, well before he was playing professional golf. “There's little things he may not even remember telling me, how the wind affects a shot if it's into the wind or downwind on 12,” Zalatoris said. “I think he told me that when I was 14, and I still remember it.”

Just 24, Zalatoris is proving to be a fast learner. At one point he reduced the deficit on Hideki Matsuyama to one shot, but the Japanese golfer turned out to be just too good.

The Wells Fargo Championship also marks the return to action of Rory McIlroy, last seen trudging away from Augusta after missing the cut. He has been continuing to work with swing coach Pete Cowen and this is the course where he won his first PGA Tour title and will return with some positive memories. 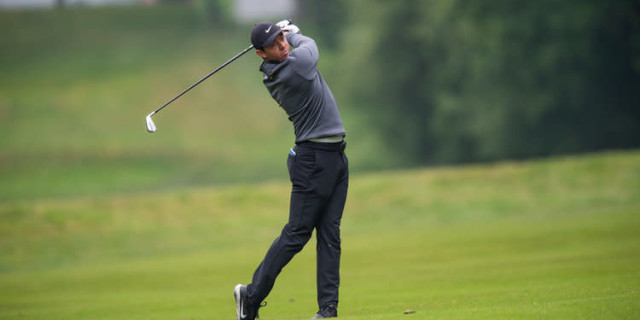 Among those still looking for a first PGA Tour title is Tommy Fleetwood, a man who game is made for Quail Hollow. The Englishman has slipped down to 26th in the world rankings after what has thus far been a pretty disappointing season. He missed the cut at the US Open, Players Championship and RBC Heritage, despite a second round of 65. But there are signs that his best form is not too far away - he finished tied 10th at the Arnold Palmer Invitational but went into the final round in contention for that elusive first win before struggling to a 77.

Fleetwood is one of the best ball strikers in the business and it is surely only a matter of time before he does win on American soil.

Jon Rahm, Justin Thomas, Xander Schauffele, Patrick Reed, Bryson DeChambeau, Webb Simpson and Patrick Cantlay have all committed, meaning seven of the world’s top 10 will be at Quail Hollow. They are joined by Tony Finau, meaning nine of the top 15 will be in the 156-man field.

Justin Thomas. Not a single weakness

Xander Schauffele. Has achieved everything this season…other than a victory

Jon Rahm. Fatherhood may just calm him down

Justin Thomas. Back to his best after a troubled start to the year

Tommy Fleetwood. It must happen sometime for the Englishman

Rory McIlroy. Based on nothing at all…

Patrick Cantlay. As consistent as they come

Corey Conners. Check out his record this season