The Craziest Shots in Golf

Whilst golf is known for its traditions and carefully thought out shots, occasionally members of our sport want to have a little fun – and who can blame them? Undoubtedly, you’ve seen a collection of ‘the best golf shots across the professional tours’ countless times. However, have you seen some of the craziest shots? Callaway asked Marcus Armitage if he would be open to setting a new Guinness World Record, and the Englishman couldn’t refuse. 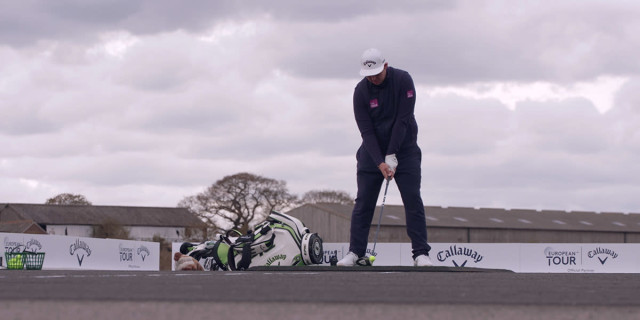 Callaway Staff player Armitage’s task was simple, he would hit his driver along a wide open concrete space for professional driver, Paul O’Neil to catch the ball in the car he was driving – over 100 MPH. Of course, this was anything other than ‘simple’. The record that the 2018 Open attendee was set to break was set in 2012 and labelled: ‘The Farthest Golf Shot Caught in a Moving car’.

273 yards held the previous record, so anything further than that would see the Englishman hold the new record. The very first attempt was awfully close, which injected both the player and the driver with confidence. Another near attempt saw the ball hit the rear of the car before falling onto the ground. Then, as O’Neil was travelling near 115 MPH, the ball successfully lands in the car to cheers from the entire team. However, upon measurement, the yardage fell just short of the record that currently stood. The pair, as frustrated as ever, continued.

Every purely struck ball would be followed by, “money, money MONEY!” from Armitage as he desperately clung onto the hope that O’Neil could deliver the improbable. A later attempt, which travelled past the targeted distance, bounced into the back of the car but just as quickly ricocheted out the vehicle. Another shot would follow the same destiny. At this time, both the player and driver looked defeated yet remained resilient; the challenge was possible, just highly, extraordinarily difficult.

Rather fittingly, a sweetly struck effort was followed by: “money, money, IT’S MONEY, PAUL”. No doubt, it was the best shot for a while and remained true to its faded line. The ball bounced into the back of the car and remained there – “That is a world record,” exclaimed the announcer. Armitage used a Callaway Epic Driver to record a distance of 303 yards both Marcus Armitage and Paul O’Neil were given their unique titles of Guinness Book of Records holders.

Below, we list alternative crazy shots but on the professional circuit – with reputation and lots of money up for grabs.

Sergio Garcia Shot From a Tree

The Arnold Palmer Invitational has seen an unbelievable standard of golf throughout its history but this shot from Sergio Garcia may go down as one of the most unorthodox, if not the most. The Spaniards wayward tee shot on the 10th hole during the final round of the 2013 tournament, nestled on top of a tree trunk. Reluctant to take a drop, the one-time major champion climbed the tree in hope he would have a shot back into the fairway. After much deliberation, Garcia, facing away from the target, hit a one-handed golf shot back into the fairway to continue his round.

Many golfers argue that there is no such thing as ‘good luck’ on the golf course. That you get countless bad breaks, that when a good one does present itself, it’s ‘justified’. Well, Darren Clarke would have certainly felt that way during the 2005 Smurfit European Open. Opting to take a long iron into the par-5 18th green, considering the hole was downhill, it was certainly in reach for the Northern Irishman. However, poor contact spewed the ball to the left and heading towards the water hazard. Bizarrely, his ball took not one, but five bounces on the rocks before popping out on the correct side of the hazard.

During The Barclays tournament on the PGA Tour back in 2013, Scott Brown might have thought he was going to be 3 off the tee on the drivable 319 yard par 4 16th hole if it was not for the luck of the cart path.   Amazingly his pushed shot which more often than not would have found the water, hit the cart path and took an incredible bounce resulting with the ball landing on the green and rolling to within 3 feet.

Thomas Detry was in a fine position during the second round of the Nedbank Golf Challenge, just one-stroke back as he stood on the 17th tee. A difficult hole with water surrounding the entirety of the landing zone, the Belgian found the vast hazard with his first tee shot. Evidently frustrated, he teed up another. Following an identical line, it looked destined that Detry would be taking five off the tee. However, rather miraculously, his ball hit a wind flag and bounced back into play. The landing zone was obstructed by trees and officials had to notify the 28-year-old that his shot remained in play, and thankfully for him, it wouldn’t be five off the tee.

Jeremy Ord Billards on The Course

Whilst Jeremy Ord is not a professional golfer, he was competing in the European Tour’s Alfred Dunhill Links Championship with his professional partner, Branden Grace. It was the 18th appearance for the South African businessman at this tournament, so it’s safe to say he knew the course well. Now that’s established, I’m adamant he did not know the course this well. Teeing off on the 13th hole par-3, his wayward opening shot was well right of the green. It’s safe to say that what followed, resulted in the use of Ord’s golfing luck for the remainder of his life. Having found the cart path, his ball then ricocheted onto the cliff, back onto the cart path and then rolled onto the green, leaving the amateur with a 3-foot putt – even threatening to drop in for an ace!

We have listed only five unbelievable shots but there are hundreds on YouTube. Feel free to check them out for yourself and remember, those good breaks come round sparingly - so enjoy them when they take place!