Kurt Kitayama arrives at the Tenerife Open looking for his third European Tour victory.  The American’s first love was actually basketball, even though he is only 5ft 7in tall. He graduated from Chico High School in California in 2011 and was senior co-captain of the basketball team, leading them to the California Northern Section titler. In the championship game he scored 31 points.  But golf was also in his blood. His older brother Daniel played golf 2007–2008 at the University of Hawaii at Hilo and now works as a professional caddie. 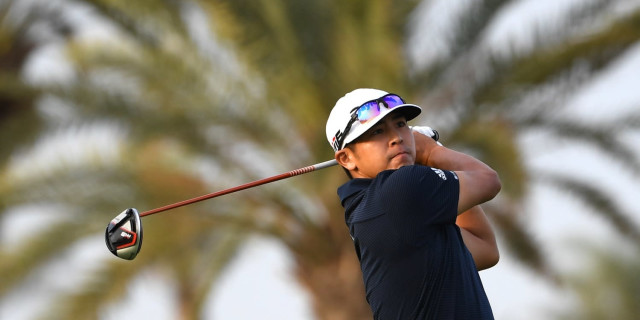 In 2009, Kitayama finished tied for third at the Callaway Junior World Golf Championship in the 15-17 age category. The event was played at Torrey Pines and among his rivals was somebody called Bryson DeChambeau.  Turning professional in 2015 he started out on the Web.com Tour and then in 2018 focused on the Asian Tour before qualifying through Tour School in November 2018 for the European Tour 2019 season.  In just the second event of the season, the Mauritius Open, he won by two strokes and in March 2019, he became the fastest player to two wins in European Tour history when he won the Oman Open in only his 11th career appearance. He would go on to be named European Tour rookie of the year.

He has made a decent start to the current campaign and is already in the top 25 in the Race to Dubai, despite missing the cut last weekend, but he is ready to win again.

Another man who would probably give his right arm for a victory is England’s Chris Wood. He has been blighted by injury throughout his career but is finally fit again and played some decent golf at the recent Austrian Open.

Still only 33, he was the low amateur in the 2008 Open at Royal Birkdale and the following year he finished third at Turnberry. It seemed that the 6ft 6in giant from Bristol had the world at his feet.

After his success at The Open in 2008, Wood turned pro. In November he gained his European Tour card, saying:  "I've worked really hard for this so I feel like I deserve everything I've achieved, but this does cap a pretty amazing year for me."

He was also named European Tour rookie of the year and also qualified for the 2010 Masters, where he missed the cut by seven strokes.

His first victory finally came at the Thailand Open in August of 2012 and he won the Qatar Master in January 2013 thanks to an eagle at the final hole.  In June 2015, Wood won the Lyoness Open  and his biggest victory came in 2016 when he claimed the BMW PGA Championship at Wentworth, taking him to 22nd in the world rankings and guaranteeing his place in the 2016 Ryder Cup team, where Wood was paired with Justin Rose in a one up victory against Zach Johnson and Jimmy walker before losing to Dustin Johnson in the singles.

Since then it has all been something of a struggle but he still has time on his side and if he remain free of the injuries that have ruined his professional career he is certainly good enough to win again.

Robert MacIntyre. The best left-hander in the world for a reason

Thorbjorn Olesen. Good to see him back