For years in the UK, there had been a reported decline in club memberships and golfers lost to other activities, with the period being viewed as more about establishing stability and securing growth for the long term. There were positive signs in 2019, but a difficult winter instantly halted that progress. However, no one could have predicted the astonishing recovery golf was about to experience following the global pandemic which has led to an unprecedented summer boom.

There are various industry reports detailing this stunning growth, and here at Golfshake we have seen record levels of traffic on the website, an influx of new members to our Score & Handicap Tracking Service, and rounds tracked up at previously unseen levels. The Revenue Club had reported the levels of demand during the summer with many clubs clawing back the early season dip and lockdown deficits, Sports Marketing Surveys have reported a year on year rounds played increase of 40% - which is a trend seen at Golfshake, England Golf have reported over 20,000 new golf club members since May, and more recently BRS Golf have reported over 100,000 new registrations to their tee time book platform which powers golf club tee sheets and GolfNow.

One of the key things we have seen at Golfshake, with the influx of members to the Score & Handicap Tracker, was not only new people taking up the game but also lapsed golfers returning.

Therefore, we decided to run a short survey over two weeks in August during the height of the season, and well into the post-lockdown period to canvas the thoughts and opinions of the Golfshake Community. Over the coming weeks we plan to offer further in-depth analysis on these findings, but for now the following provides details on the key data. 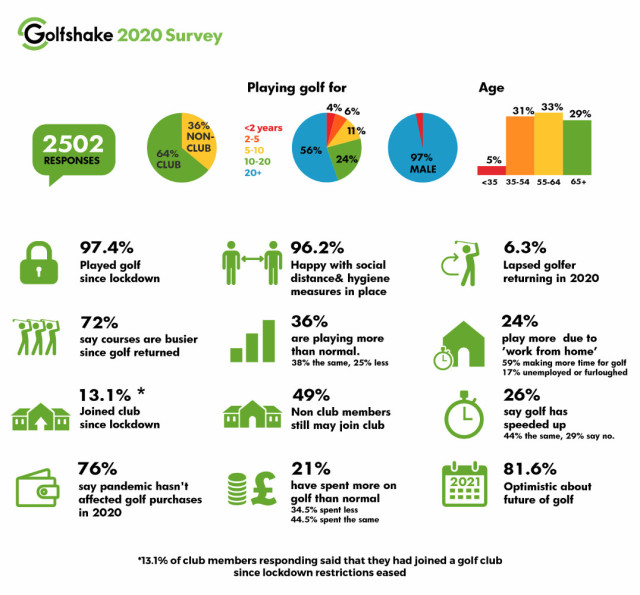 The survey was completed by over 2,500 golfers, of which 64% stated they were members of clubs, 97% were male, the majority were from the UK and largely England, 62% were aged in the core golfer demographic of 55+, and at the time of completing 97.4% had played a round of golf since lockdown. Additionally, 96.2% said they were happy with the social distancing and hygiene measures in place at venues they visited.

More Golfers Back Playing More Golf Than Ever

Whilst only 1% of the respondents said they had played golf for less than a year, one of the most interesting statistics was the number of lapsed golfers who had returned to the game since lockdown with a staggering 6.3% stating they had come back to golf in 2020. Following the UK lockdown, golf was one of the first recreational activities to resume, being an outdoor sport perfectly placed to encourage social distancing, it was initially one of a handful of activities that people could do.

Golf had some payback following the 2012 Olympics and the subsequent boom in cycling, with the game now benefitting during the summer months from these unique circumstances, something commented on throughout the survey.

"Since golf was one of the first sports allowed back it was the only way to get out and exercise."

"Because of cricket restrictions I still need to be active and golf was the obvious answer."

The 2.6% who had yet to play were made up of 77% independent golfers and 23% club golfers with 31% stating this was due to still isolating or restricting activities, 17% due to work/personal circumstances, 19% had stopped playing golf, and 2% noted both factors, stating either the prohibiting cost or access to tee time availability.

Of the 64% completing the survey who stated they were members of a golf club, 13.1% had become a member since lockdown. Further analysis of the lapsed golfers returning to the game identified that over 34% of these had immediately become golf club members. Furthermore, 29% of the lapsed independent golfers are considering joining and 28% said that may join with only 43% stating they weren’t considering joining. With unprecedented levels of demand for golf and reported issues around tee time availability, it is easy to see why golf club membership was on the rise, identified in the comments below and something we will cover in a future article.

With a record number of memberships being taken up, golf clubs need to work hard to turn these new customers into loyal members for long term retention. Of those joining a club in 2020, 95.9% stated they had been made to feel welcome, and whilst the numbers were low, we were quite surprised to see that 4.1% stated they hadn’t.

Only 12.8% had been introduced to some sort of ‘buddy’ to get them accustomed to the club and other members.

For golf clubs to maintain retention, strategies will be required. From our data of new members, 46% had been offered a special discount to join - what will happen once this discount ends? 72% said they planned to remain a member and it wasn’t a short term thing, 26% weren’t sure and 2% said they didn’t plan to remain a member.

Additionally, the independent golfer market is something that we have covered a lot in the past; surveying their thoughts, what would entice them into membership and what they actually want from golf. Post-lockdown analysis wasn’t dissimilar, with 51% stating they weren’t considering joining a club. However, 31% stated they may join a club and 17% stated they were actively considering joining a club.

As we move into what is seen as the off-peak/low season for golf in the UK, golf clubs need to be working harder than ever to ensure they maintain the increased number of new golfers participating during 2020.

81.6% of respondents said they were optimistic about the future of golf, and we plan to provide further insights and analysis from the survey over the coming weeks.

Among those hot topics will be course availability and pace of play, in light of restrictions that were introduced on the number of players in a group, particularly in the early weeks after the lockdown, which saw 26.1% of respondents stating golf had speeded up, 44% said it was the same, and 27% stating no.

Golf is Booming - Let's Make Sure it Continues

How to Turn Unattached Golfers Into Golf Club Members

The Positive Opportunities for Golf to Embrace

Golf Has a Chance to Grasp That May Never Come Again

Are These the Issues Golf Clubs Still Need to Address