LIVE golf returns to our screens on Sunday when Dustin Johnson and Rory McIlroy take on Matthew Wolff and Rickie Fowler in the TaylorMade Driving Relief skins match at Seminole Golf Club in Florida in aid of Covid-19 relief efforts.

So should we tune in? Does anybody care? Well yes, actually, to both questions. In the first place the event is going to raise a great deal money for good causes. And it will also show us how professional golf is going to look for a while.

Everyone onsite will be subject to a variety of forms of screening including questionnaires, temperature checks and Covid-19 testing. All facilities will be disinfected. PPE, sanitary wipes and sanitiser will be distributed to everybody and used where proper social distancing measures can’t be taken.

Everyone will be asked to operate in a socially distanced manner at all times and should frequently wash and sanitise their hands while at the course. In addition, they will be responsible for disinfecting equipment and areas of service.

Players should not have contact of any kind, so there will be no handshakes, fist bumps or high-fives.

All flag, flagsticks and cups will be disinfected before play. Players should avoid touching, removing or attending the flagstick. Rules officials will handle flagsticks.

All rakes have been removed from the course. And there will be no fans.

It remains to be seen how the player-caddie relationship is going to work with social-distancing rules. 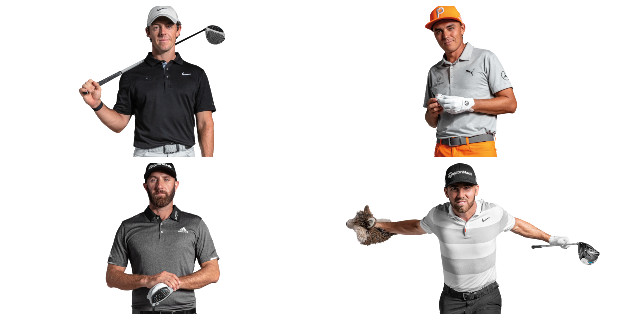 As far as the actual event is concerned, you have to feel a little sorry for Fowler. He is no slouch off the tee but McIlroy, Johnson and Wolff are three of the biggest hitters on the PGA Tour and with Seminole only measuring 6,836 yards they could bring it to its knees.

Johnson and McIlroy will be teaming up and they are warm favourites to win. They have 38 PGA Tour victories between them. And when it comes to strokes gained off the tee, McIlroy led the way in 2016 and 2019, while Johnson took the honours in 2017 and 2018.

By way of understatement, Johnson said: “I think we’ve both gotta be up there in top drivers of the golf ball right now. Rory is a great driver of the ball - he hits it long, he hits it straight.”

McIlroy said of Johnson: “I do marvel at his power … every time I see him on Tour I say, ‘Don’t get drawn into a driving competition.’”

While winning three times on the way to the FedExCup last season, McIlroy hit 58.6 percent of his tee shots over 300 yards. He hit 57 drives 320-plus in the FedExCup Playoffs alone.

Each hole will be worth a skin and in the event of a tied hole, the money will carry over to the next hole.

If neither team wins a skin in the first six holes, the seventh hole will be worth $400,000.

In addition to the Skins Match, there will be a competition for birdies and eagles.

The values of these will start as following.

Rory is Raring to Go on the PGA Tour