Golf writer Will Trinkwon reviews - The Golfer’s Lament by Will Nett.

"The Golfer’s Lament is a breezy and likeable account of the honeymoon period of falling in love with the game."

The title of Will Nett’s 2019 book The Golfer’s Lament is misleading. While this charming and witty little book certainly has its eyes open to our idiosyncratic sport’s darker sides – the heartache of a whiffed short putt, obsessing over it so badly you find your hands snaking into a Vardon grip as you dream of striking 6 irons in your sleep – make no mistake: this isn’t a lament, it’s a celebration. And while Nett isn’t shy of sticking the middle finger to golf’s paltrier parts, at its heart, The Golfer’s Lament is a breezy and likeable account of the honeymoon period of falling in love with the game.

What spurred Nett to take up the clubs is unclear, but his goal – once he’s secured himself a “Death Sceptre” (2 iron) and “Pendulous Flingable Bat” (putter) – is utterly crystal: “to score less than a hundred, playing once a week; upset various badly-dressed committees the length and breadth of the country, and write a book about the whole farce.” 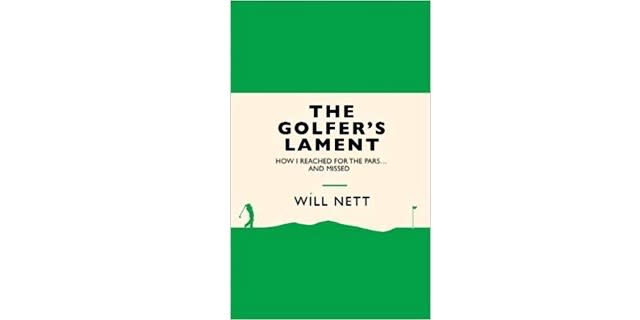 For those of you who are well-versed with previous ‘outsider gets into golf with a view to reaching a certain standard and annoying committees’ books, such as Tom Cox’s Bring Me the Head of Sergio Garcia! and Tom Coyne’s Paper Tiger, this will be familiar turf, and Nett’s book has much in common with these classic tomes. All the loved conventions are here. There is the dutiful and wizened old coach in Martyn Stubbings, a “smiling, ruddy-faced, 38 year old, whose handshake even resembled a golf swing”, the requisite dabble with weird training aids and new technology (see “the Talon”, p.76), a trip to Urban Golf and a wacky crazy golf tournament which reminded me of the book-capping street golf tourney in Cox’s Garcia. But Nett does a good job of making these tested motifs feel fresh and relatively original: The Golfer’s Lament owes a large debt to the books that have gone before it, but it has enough of its own virtues to stand on its own.

One of these is the quality of its writing, which, it must be said, is brilliant, even compared to old masters like Cox and Coyne. The Golfer’s Lament abounds with witty phrases. Chaps who hoof balls into trees, for example, are described as “axemen” (a nickname I will certainly be pinching to use on my long-suffering and forest-prone regular playing partner), while, later on, a player is described as running his ball onto a green with “an angry scuff of his 5 iron”. This reviewer also appreciated the Lord of the Rings reference on p.82: “There was no let-up from this arbour-addled nightmare. Beech, oak and ash trees loomed at me from all directions like the Ents from Lord Of The Rings.”

The other way Nett’s debut golf book stands out from a very crowded market is by its range. For, in addition to detailing Nett’s experiences as a fledgeling golfer, The Golfer’s Lament also smuggles in a good deal of trivia, random miscellany, and various interesting titbits and nuggets about the game. Did you know that the first ever Olympic female golf champion, Margaret Abbott, won the tournament with a 9 over par nine-hole round of 47? How about the ins and outs of the North of England Open Amateur Youth Golf Championship (excepting battle-hardened junior open veterans who had too little friends and too many putters in their formative years)?

Nett’s book does have some pitfalls. The potted history of the game in chapter 3 is unlikely to do much for anyone with a reasonable knowledge of golf history and his pronouncement, made part-way through the book, that footgolf is “a damn sight more fun than [real] golf” is liable to have purists gnashing their 5 irons with frustration. On the whole, however, The Golfer’s Lament is an enjoyable and well-put together book. It will be a welcome addition to any golf buff’s shelf.