IF IT’S the beginning of February it must be Australia. The European Tour heads back Down Under as Scotland’s David Law defends his ISPS Handa Vic Open at 13th Beach Golf Links. Law claimed the title in spectacular fashion last year, winning it with an eagle at the final hole to finish one ahead of Brad Kennedy and Wade Ormsby in what was only his 18th European Tour start.

Law was three behind as he stood on the 16th tee at 13th Beach, but birdied the 16th and then strike a glorious second shot to eight feet at the final hole to set up that eagle. The Scotsman, who became the first European winner in the history of the Vic Open, is one of eight past champions competing in the state of Victoria this year. Joining him are: Simon Hawkes (2018), Dimi Papadatos (2017), Richard Green (2015), Matthew Griffin (2014), Jason Norris (2010), Ash Hall (2009) and Gareth Paddison (2004). Also in the field will be 2006 US Open champion Geoff Ogilvy, who famously finished one stroke clear of Jim Furyk, Phil Mickelson and Colin Montgomerie at Winged Foot GC.

Scottish golf has been in the doldrums since Montgomerie left the European Tour, but the likes of Law, Connor Some  Grant Forrest and Robert MacIntyre are leading a resurgence. Law has been a slow burner. He is 28 years old and won the 2018 SSE Hydro Challenge on the Challenge Tour. Back in 2009 he won both the Scottish Amateur and Scottish Boys Championships. He won the Scottish Amateur for a second time in 2011 and became the first amateur since 1970 to claim the Northern Open, but he was overlooked for the GB&I Walker Cup team. Bitterly disappointed not to make the side, he turned professional in 2011. 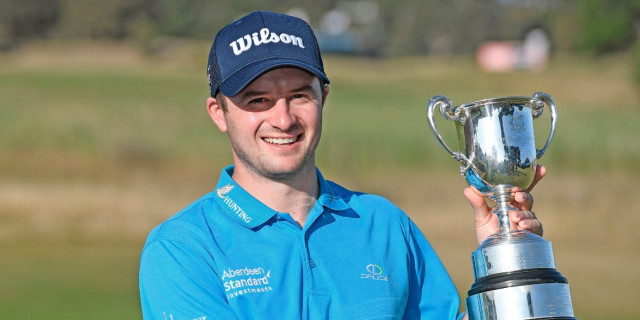 He says his target for the 2020 campaign is to make it into the final three events of the European Tour season, including the DP World Tour Championship in Dubai which would require a top-50 finish in the Race to Dubai. He said: “The goal would be to play in the final three events. In terms of performance, I’m looking to improve all aspects of my game. If I make small gains in all areas then it will be a successful year.”

It has been a tough journey for the Scot, who has also had to deal with some personal trauma. He and his fiancée Natasha suffered the pain of their son being stillborn, an experience that puts things into perspective for Law.

“When you go through something like that, you realise how fragile life is," he says. "I’m just so grateful that we got the support we did. It was unbelievable. I went back to play two weeks after it happened and, honestly, it was probably six weeks too early. We were both still in a pretty bad way. But I had to play and I knew that the longer I put it off, the harder going back would be.

“That first week, in particular, was horrendous. I didn’t like being on the course and I hated being away from Natasha. It was pretty terrible. Fortunately, the guys were great. There were a few who'd avoid you because they didn’t know what to say and they didn’t want to upset you by saying or doing the wrong thing and, honestly, I think I’d probably have been the same before it happened to us, so I completely understand that. Equally, you’d get guys who maybe you didn’t know that well who would be brilliant and check in to see how you were getting on and so on. You see people in a whole new light.”

Law admits that what he and Natasha went through has, as you might reasonably expect, changed him in a number of ways. “Golf isn’t the 'be all and end all' like it was before,” he says. “I’ve got a new perspective about how important it all is in the grand scheme of things. My attitude towards people has probably changed, too. I’ve always thought of myself as a sociable, friendly person but I definitely have a new appreciation for just asking how somebody is. It's a small, simple thing but it can make a huge difference."

So you can be sure that he will be determined to enjoy every single second of his title defence.

The ISPS Handa Vic Open brings together the men's and women's professional game, with two tournaments played concurrently on the same golf courses for a purse of AUD$3million split equally. Men and women compete in alternating men's and women's groups on the Beach and Creek courses at 13th Beach Golf Links, with a 36-hole cut seeing players progress to a weekend on the Beach Course. There is then another cut after the third round and two champions are crowne dat the close of play on Sunday.

The men's tournament is co-sanctioned by the European Tour and ISPS Handa PGA Tour of Australasia, while the women's event is co-sanctioned by the LPGA and ALPG Tour. Past champions Celine Boutier (2019), Minjee Lee (2014 and 2018), Mel Reid (2017) and Marianne Skarpnord (2015) will compete in the women's tournament alongside seven-time Major Champion Inbee Park of South Korea and Australian Major winner Hannah Green.

While Law is the defending champion, history points to an Australian winner (there have only been eight foreign winners since it was first staged in the 1950s), with Lucas Herbert hoping for a home victory after his recent success in Dubai. His confidence is sky-high after that performance, during which he beat a world-class field.

Many will be rooting for Sweden’s Rikard Karlberg. He won his breakthrough tournament at the Italian Open way back in 2015 and seemed to have the world at his feet, especially when he finished second at the BMW PGA Championship at Wentworth in 2016 and ended the season in 34th place in the Race to Dubai. After battling injury and depression which forced him to step away from competitive golf, the Swede holed a 50-foot birdie putt on the final hole of 2019 Qualifying School Final Stage to earn the final European Tour card for 2020.

Life in Australia has been dominated by the impact felt by the devastating bushfires that have ravaged the country, and the issue is bound to take centre-stage again. The Australian Golf Industry Council (AGIC), a collaboration of Australia’s golf industry bodies, has created the Australian Golf Bushfire Fund. In support of this effort, five major tours – the LPGA Tour, the Ladies European Tour, the ALPG, the European Tour and the ISPS Handa PGA Tour of Australasia – have joined forces to donate $100,000 to the cause.

In a joint statement, the five tours said, “Australia’s golf community and courses are among the finest in the world and our tours always look forward to playing in the country. Golf is known for its commitment to charity, and this fund provides a way to encourage additional contributions by golfers worldwide. All of our best wishes go to everyone who has been affected by these horrific fires.”

Those wishing to contribute to the Australian Golf Bushfire Fund can do so via a GoFundMe page as well as a designated bank account. The AGIC will direct distribution of the funds. More than 50% of the total raised will go to the Disaster Relief Recovery Fund run by the Australian Red Cross, with the remaining funds distributed to other bushfire-related charities, including wildlife funds, and to golf clubs impacted by the disaster.

Numerous players have also made individual pledges of support, including Cameron Smith and Herbert.

Lucas Herbert. On the crest of a wave

David Law. Would love to make a successful defence

Lucas Herbert. Would love to win in front of home fans

Wade Ormsby. One of the straightest hitters in the game

Joel Sjoholm. Has made a promising start to the season

Ashley Chesters. In need of a few decent weeks

Rikard Karlberg. Back from the brink

Geoff Ogilvy. Former US Open struggling to recapture past glories