Home of the Masters Tournament since 1934, Augusta National is arguably the most iconic golf course on the planet, sitting alongside the Old Course at St Andrews and Pebble Beach for that accolade. The one major played at the same venue each year, we have a connection to this layout unlike any other, having seen moments played throughout decades. We've seen it all before. We know the potential for greatness. The lurking disaster. It's what makes the Masters special.

But Augusta has continually evolved, not to always to everyone's liking. We take a closer look at 18 holes of this legendary course, where the players of today will walk in the footsteps of legends.

3rd (Flowering Peach), 350 yards, par four: Shortest par four on the course but a pear-shaped green with steep slope in front allows for some wicked pin positions. Charl Schwartzel pitched in for eagle in the final round en route to the title in 2011.
2018 average: 3.93 (rank 14)

4th (Flowering Crab Apple), 240 yards, par three: The back tee turns it into a beast with the green sloping from back to front. Phil Mickelson took six here in the final round in 2012 and finished two shots outside the playoff. Jeff Sluman’s ace in 1992 remains the only hole-in-one here in Masters history.
2018 average: 3.32 (rank 2)

7th (Pampas), 450 yards, par four: Used to be a real birdie chance but has been lengthened by 40 yards, while trees were also added and the putting surface reshaped. More bunkers - five - around the green than any other hole.
2018 average: 4.21 (rank 4)

10th (Camellia), 495 yards, par four: A huge drop from tee to green on this dogleg left and over all the years of The Masters the most difficult hole. It was here that Rory McIlroy began to fall apart in 2011 with a seven, while Bubba Watson clinched the title in 2012 by making par in the playoff from the trees.
2018 average: 4.08 (rank 11)

12th (Golden Bell), 155 yards, par three: Probably the most famous par three in golf. Narrow target, water in front, trouble at the back, it has seen everything from a one to Tom Weiskopf’s 13 in 1980. Defending champion Jordan Spieth took seven in the final round in 2016 in a dramatic back-nine collapse.
2018 average: 3.11 (rank 9) 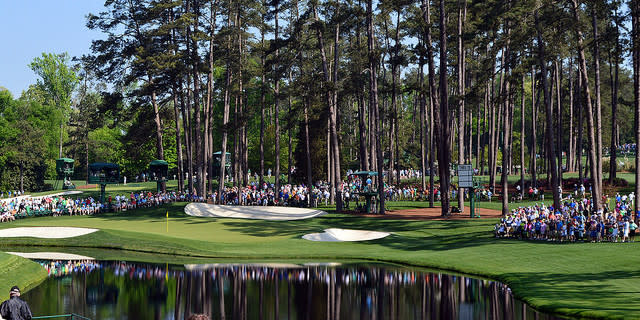 17th (Nandina), 440 yards, par four: The famous Eisenhower Tree has been removed after suffering storm damage, making for an easier tee shot on the hole Justin Rose double-bogeyed when one off the lead in 2007. Jack Nicklaus birdied here to take the lead as he won his 18th major in 1986.
2018 average: 4.17 (rank 5)