ITALY’S Francesco Molinari grabbed all the headlines - along with the Race to Dubai title - after his magnificent 2018. He won the BMW PGA Championship and The Open Championship and was the star of the show for Europe at the Ryder Cup. But there were plenty of other superb performances on the European Tour. Here, we pick out 10 golfers with reason to look back on the year with more than a little satisfaction. There have been some stirring comebacks, the emergence of more young stars and continued great play from established stars.

Winning the BMW PGA Championship and securing his first title on the PGA Tour would have been enough for most men. Not Molinari. The little Italian has played like a man possessed in 2018 and it should have surprised nobody when he won The Open at Carnoustie in such astonishing fashion. He has always been one of the world’s best iron players but was held back by a suspect putting stroke. He put all that to bed in Scotland, holing putts from everywhere. He never looked like he was going to miss. And, just for good measure, he then went to the Ryder Cup and secured five points from five, as well as securing the Race to Dubai.

This was the year that former boy wonder Tom Lewis finally came of age. He won the Portugal Masters in 2011 at the age of 20 and seemed to have the world at his feet. But then it all fell apart. There was the odd glimpse of form, the occasional top-10 finish but he failed to live up to his huge potential and spent years scratching around trying to make a living.  There was little sign that anything had changed when he missed his first five cuts of the season but then he finished sixth at the Czech Masters, won the Bridgestone Challenge on the Challenge Tour, finished third in the Kazhakstan Open and crowned it all by winning the Portugal Masters again. Lewis is back in the big time.

He may not be everybody’s cup of tea, but Hatton continues to take huge strides forward and revelled in the atmosphere at the Ryder Cup. He also came within a whisker of winning the Alfred Dunhill Links Championship for a third year in succession and consistently found himself in contention on the PGA Tour. Hatton finished the year without a victory to his name but he came close several times. Nobody needs to tell him that he needs to get his temper under control and there are finally some signs that he may be growing up.

Fought all year to hang on to his Race to Dubai crown. Fleetwood is now a world-class performer with absolutely no weaknesses. He came within a whisker of overhauling Brooks Koepka at the US Open and it is surely only a matter of time before he lands his first major. The Englishman has developed a happy knack of shooting the lights out around some of the most difficult courses on the planet. Don’t be fooled by that claw grip he uses on the greens - he is a wonderful putter. But perhaps the best club in his bag is the one that he carries between his ears. He has a wonderful temperament and plays the game with a smile on his face. 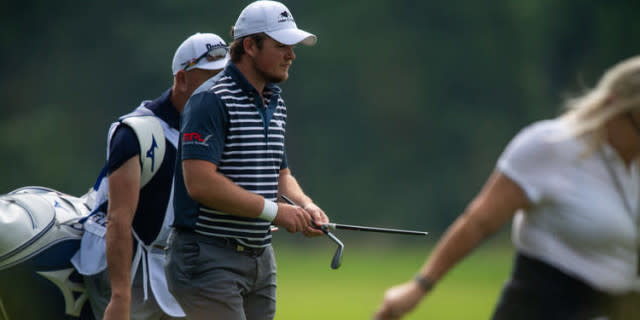 What a comeback! Barely two years ago he lost his playing privileges and looked like he had also lost his motivation and his desire. But it turned out to be the wake-up call he needed. The Englishman has enjoyed a spectacular season and can count himself genuinely unlucky to have missed out on the Ryder Cup. He finally won his first tournament and then went on a wonderful run, producing top-10 finishes for fun. He now believes in himself and looks like a winner. Has a long and bright future ahead of him. He is also one of the game’s good guys.

The 2016 Masters champion has had a wretched time of it. He would be the first to admit that he didn’t handle things terribly well after winning the Green Jacket. But there was no way he could have foreseen the injury misery and loss of form that saw his world ranking fall off a cliff. Many lesser individuals might well have given up. Not Willet. He is a fighter and a survivor. There were many who thought he was making a mistake when he sacked his caddy and swing coach and for a long time it looked like they were right. But, finally free of injury, Willett’s name started to appear on leaderboards once more - and then he went and crowned it all by winning the Dubai World Championship.

You may well ask how somebody who won three times in the one season failed to make it to the Ryder Cup at Le Golf National. Unfortunately, the tournaments that Wallace won did not carry huge prize funds but make no mistake about it - this guy is a serial winner and he is a seriously talented player. He will win more tournaments - lots of them - and don’t be surprised to see him starting to make his mark on the other side of the Atlantic. He also loves playing and was still grinding it out in December - and still playing some brilliant golf.

The Dane’s talent has never been in doubt. The problem was that while others recognised, perhaps he didn’t. He does not hit the ball into the middle of next week, but he is incredibly consistent and he finds lots and lots of fairways. He also possesses a short game to die for. If Rory McIlroy could putt the way that Olesen does he would have won 10 majors by now. Comfortably settled within the world’s top 50, he is only going one way - and that it up.

Comeback story of the year. He played little golf in the early part of the season and his world ranking began to tumble. There was no way back, or so we thought. But 45-year-old Westwood was determined not to be outdone or outshone by the brilliant group of young English golfers and decided to go away and work on his game. Towards the end of the year he started to look like the Westwood of old, enjoying top-10 finishes for fun. And then came the Nedbank Challenge at Sun City in South Africa, a tournament he had won twice before. He produced a sensational final round to see off the Sergio Garcia and Louis Oosthuizen. There’s plenty of life in the old dog yet.

The Spaniard has made steady if unspectacular progress but be under no illusions - this 26-year-old can play. He won the Belgian Knockout and enjoyed a total of six top-10 finishes. He has a happy knack of doing well in big tournaments, finishing third at the Turkish Airlines Open and fourth at the Dubai World Championship as he ended his season in spectacular fashion.