AND SO it all comes down to this. Francesco Molinari and Tommy Fleetwood head the field at the DP World Tour Championship and, at the end of it, one of them will be crowned Race to Dubai winner. Molinari, the Open champion, remains in pole position, and few would begrudge him the prize and the bonus money that goes with is after a year in which he won The Open and the BMW PGA Championship and also added his first title on the PGA Tour.

Week after week the Italian has produced flawless golf, but it is a measure of Fleetwood’s astonishing consistency that he has been unable to shake off the Englishman, who won the Race to Dubai 12 months ago and has continued to play brilliant golf all year, coming within a whisker of winning the US Open and finding the happy knack of shooting the lights out at some of the most difficult course son the planet.

And then, of course, there is Justin Rose who has surprisingly decided to give the tournament a miss. Nonetheless, it is worth reflecting on what he has achieved this season. He successfully defended his Turkish Airlines Open title and all of a sudden he found himself in third place in the Race to Dubai, breathing right down Fleetwood’s neck. But he also elected not to travel to South Africa. Rose has become a phenomenon. Remember that this is the same golfer who missed his first 21 cuts as a professional and who had to wait until 2002 for his first victory. He quickly followed it with another but then seemed to lose his way somewhat. He had to wait a further five years before he won again in Europe but his win in Turkey was his 11th on the European Tour and he has become a serial winner on the PGA Tour.  He was a total of nine victories on the PGA Tour and has picked up a title every year since 2010 - the only exception was 2016 when he won the Olympic gold medal in Brazil instead, defeating Henrik Stenson in a thrilling battle.

His sole major remains the 2013 US Open but he lost in a playoff to Sergio Garcia at The Masters in 2017 and finished second behind Molinari at Carnoustie in July.  He has never won the Dubai World Championship but he did win the Volvo Masters in 2007, which was its predecessor and every indicator points towards him ending the season with yet another title in the bag. It is worth taking another look at his form on the PGA Tour in the season just ended. Rose made 18 starts and missed just one cut. That is impressive enough but when you add two victories, three runner-up finishes, one third place, 11 top 10s, 15 top 25s and more than $8m in prize money you see that he has had a year that bears comparison with anybody. Oh yes, and he sits proudly atop the world rankings.


The Dubai World Championship was won in 2011 by Alvaro Quiros, in 2012 by Rory McIlroy, in 2013 and 2014 by Henrik Stenson, in 2015 by McIlroy, in 2016 by Matthew Fitzpatrick and last year by Jon Rahm. The top 60 in the order of merit will all be in attendance, and that includes all 12 members of Europe’s victorious Ryder Cup team.

So the obvious contenders, apart from Molinari and Fleetwood, are McIlroy, still searching for something approaching the form that saw him win four majors, Stenson, Sergio Garcia, resurgent after his recent victory in Spain, and Ian Poulter.  And the field also contains two leading Americans, Masters champion Patrick Reed and Xander Schauffele. Reed led the Race to Dubai for much of the year after that victory at Augusta. He went off the boil for a while and had a poor Ryder Cup, but you can never write him off. 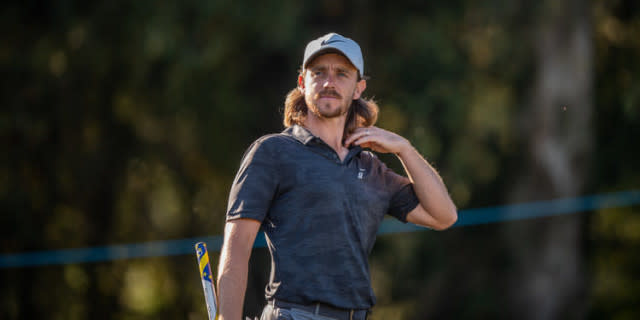 But the real dark horse, and the man who is the one to keep an eye on is surely the Danish golfer Thorbjørn Olesen. He has truly come of age in 2018. There was never any doubting his ability but perhaps he lacked a little self-confidence. He has always been an excellent ball striker and is one of the best putters on the planet but he has really kicked on this year and fully deserved his place in Thomas Bjorn’s team.

Olesen won the Italian Open but it has been generally overlooked that he also had a further seven top 10 finishes, and was 12th at Carnoustie. He is now comfortably inside the world’s top 50, which means he gets entry into all the majors and the WGC events and his ranking is only going to continue to rise. It surely won’t be long before he is challenging for a place in the top 10. He is only 5ft 9in and weights less than 11 stones but remember that Rory McIlroy is about the same height and weight and is one of the longest hitters in the game. Olesen doesn’t possess the power of the Northern Irishman but he is one of the most accurate drivers of a golf ball on the European Tour and as long as he retains that silky touch around the greens he remains a formidable player.  He also has a wonderful temperament.


Garcia has had an extraordinary 12 months. He won The Masters in 2017, which was one of three victories in a memorable year. But he suffered a horrible reaction - on the golf course at least. He is now happily married and has become a father, but his defence at Augusta was awful to behold. He then went on to miss the cut at the US Open, The Open and the US PGA Championship. Eyebrows were raised when Thomas Bjorn handed him a Ryder Cup wildcard but he repaid the Dane by winning three points and becoming the record points scorer. It clearly inspired him as he then finished in the top 10 at the Portugal Masters and, lo and behold, went on to successfully defend his title at the Andalucia Masters, a tournament he hosts. He then played brilliantly at the Nedbank Challenge in South Africa and heads to Dubai absolutely determined to finish the year in style. Would you bet against him?

Tyrrell Hatton, another Ryder Cup player and a man who will fancy his chances in Dubai, could learn a great deal from the way that the Dane takes the rough with the smooth. There are those who will try to convince you that Hatton - and Rahm - are the players they are because they allow themselves to get so wound up by bad shots or when the rub of the green goes against them. Your correspondent is not one of them. Hatton and Rahm are hugely entertaining and remarkably gifted young men who wear their hearts on their sleeves but they struggle to put a poor shot behind them and chunter away for far too long. When they are finally able to keep their emotions in check they will both win far more tournaments than they do now - and that is when the rest of the world had really better watch out.

Hatton has actually admitted that he wishes he keep remain more in control of his emotions but he is still a young man and he will surely mature further. He is a wonderful golfer and when his game is dialled in there are fewer golfers anywhere in the world who are better with an iron in their hands. He should have successfully defended the Alfred Dunhill Links Championship but hit a few loose shots coming down the stretch and lost the plot. It is top be hoped that he will have learnt some valuable lessons from that painful experience. It wasn’t pretty to watch him losing his temper in such a public manner.

Rahm insists that he will never change, and when you look at his record it is difficult to argue with him, but being able to move on with a smile on his face would surely improve the results he is able to achieve.

Fitzpatrick, a former winner in Dubai, was bitterly disappointed to miss out on the Ryder Cup team and has shown some good form in recent weeks. He accepts that he will never be a bomber and that he needs to make the most of what God gave him - and that means he is happy to bore his opponents to death by hitting fairway after fairway. So what if he is 70 yards behind McIlroy if he is slap bang in the middle of the fairway. Fitzpatrick has a wonderful temperament and a short game to match that of Olesen. Neither of them hit the ball miles but both have proved there is more than one way to skin a cat - and to win a golf tournament!

Tommy Fleetwood. One last throw of the dice

Thorbjorn Olesen. Looking to cap the year of his life

Matt Wallace. Still underrated. But why?

Rory McIlroy. Looking to draw on some positive memories