It's Time to Draw a Line Under Marquee Groups at Majors

IF YOU are the English golfer Tom Lewis and, against all the odds, you manage to get through final qualifying to join the elite field teeing it up at the US Open at Shinnecock Hills, then you might be forgiven for dreaming that, on days one and two, you might be playing alongside the likes of Rory McIlroy, Jordan Spieth or Justin Rose.

The same could be said of Luis Gagne, an amateur from Costa Rica, Kristoffer Reitan, a Norwegian amateur, or American pros Cole Miller, Lanto Griffin and Jacob Bergeron.

Not a chance. Let’s just say that when it came to the draw for the first two rounds of the tournament, it is safe to say that the word “random” was nowhere near the top of the USGA’s list of priorities.

How else do you explain away a three ball featuring world number one Dustin Johnson, world number two Justin Thomas and the biggest draw in golf, 14-time major champion Tiger Woods? Or one that sees Rory McIlroy, Jordan Spieth and Phil Mickelson keeping one another company?

Still not convinced? Well, ask yourself what are the odds of a random draw putting together Tyrrell Hatton, Danny Willett and Ian Poulter? You may just have noticed that all three of those golfers are English.

There are three Spaniards in the 156-man field - Sergio Garcia, Jon Rahm and Rafa Cabrera Bello. Guess what? They are playing together. 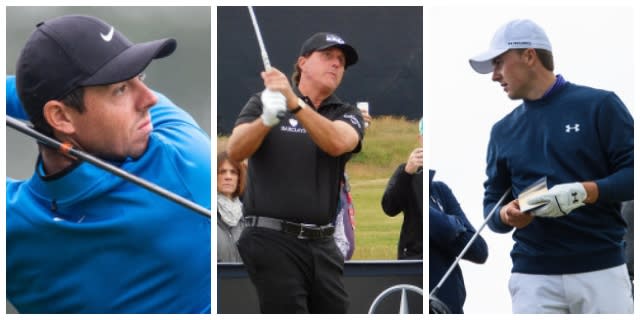 Tommy Fleetwood, winner of the 2017 Race to Dubai, is partnered with 2018 Race to Dubai leader Francesco Molinari and Alex Noren, consistently one of the best European golfers over the past three or four years are, yes, playing together.

And what are the odds of China’s Haotong Li, Thailand’s Kiradech Aphibarnrat and South Korea’s Is Woo Kim coming out of the hat in the same three ball? We believe it would be somewhere in the order of 100,000-1. Oh look, there they all are playing together.

There will be those who will praise the USGA for producing so many marquee groups but those who do so totally miss the point. Lewis, Griffin and company are all taking their rightful places in the field because they qualified and deserve to be there. They have as much right to be going for the title as the likes of Woods, Spieth and McIlroy. And they have every right to expect that the draw would not be rigged and that they would have an opportunity to play with these world-class golfers over the first 36 holes.

The cream will always rise to the top anyway, so after the halfway cut is made the chances are that most groups will feature household names.

Those who came through qualifying are living the dream - and that dream would have involved seeing how their games shape up when compared with the likes of Johnson and Thomas. Who knows? Playing with those guys may even inspire them and see them raising their game?

Sadly, TV is king now. And if TV tells the USGA that it doesn’t want to see Woods playing with Lewis and Griffin, then TV will gets its way. It is such a shame

Bet you can’t guess who Lewis is playing with? Go on, have a crack. Oh all right then, we’ll put you out of your misery - he is with  Lanto Griffin and Jacob Bergeron. And Cole Miller? Well he is with Luis Gagne and Kristoffer Reitan, of course.

We all like to get behind an underdog. But if you partner all the underdogs together, the chances are that nobody will actually get to see them play unless one of them produces the round of his life. And the likelihood is that without the support of a huge and enthusiastic gallery and without being able to feed off the genius of a Woods or a Spieth, the likes of Lewis, Griffin, Bergeron and Miller will struggle and almost certainly miss the cut.

It is impossible to please all of the people all of the time, but these groupings are a missed opportunity and it is about time somebody stood up and said so. McIlroy has already expressed the view that marquee groups are bad for the game because they always tend to struggle if just one of the group happens to be off key. They try too hard because there is an element of macho about the whole thing too. “I can drive it further than you.” So they all end up hitting the ball as hard as they can and they all spend most of their time in the rough. “I am a better putter than you.” So they all end up three-putting umpteen greens.

The time has come to put 156 names into a hat and draw them out one at a time and resist the urge to put names back in if the organisers - and the TV companies - don’t like the order in which they come out.