Srixon is celebrating a milestone after the popular Z-STAR golf ball series achieved a 500th victory on the game's global professional tours. This historic triumph was secured when Malaysia's Nicholas Fung claimed the 2017 Queen's Cup on the Asian Tour, which was contested at Santiburi Samui Country Club, Samui, Thailand.

Since its first introduction in 2008, the Srixon Z-STAR series (Review) has been used by the world’s best players, with its outstanding distance, strong performance in the wind and superior spin control around the green helping to contribute to their successes. Accumulating 500 wins is a feat in itself, but to achieve this across 47 countries and regions that include Japan, U.S.A., Europe, Korea, Asia, South Africa and Australia validates the brand´s products and showcases the global status of the Srixon brand.

Many of the Srixon Z-STAR series golf ball players, including Hideki Matsuyama, have been in great form recently, capturing big titles such as Major Championships and the WGC events. On the PGA Tour the Z-STAR series has accumulated 28 wins and become the second most played golf ball in the 2015-16 season. On the LPGA Tour it has amassed 29 victories, including 9 Majors, demonstrating that it continues to be trusted by the best players around the world.

In 2013, Hideki Matsuyama became the first tour rookie to win the money title on the JGTO Tour. Since then, Matsuyama has been playing primarily on the PGA TOUR and has earned 13 combined wins – 4 wins on the PGA TOUR, 1 unofficial win (Hero World Challenge) and 8 wins on the JGTO Tour. He also finished T-2nd at the 2017 U.S. Open, equaling the best finish by a Japanese player in any of the major championships, and proved himself to be truly one of the best players in the world.

The Srixon Z-STAR series has been trusted by Matsuyama as its total performance, including pleasant sound and feel fits his game, and it will continue to partner with him in pursuit of his first Major title. 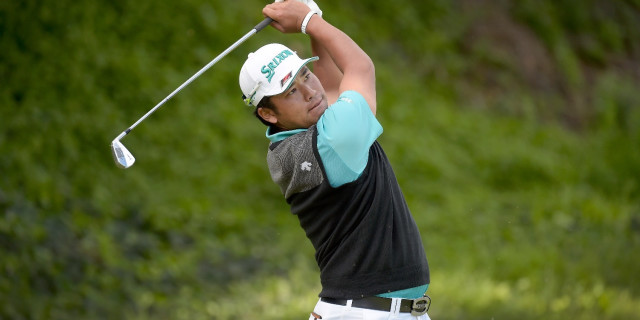 Inbee Park (Korea) has won 17 times on the LPGA Tour, including 6 major titles. In 2015, she won the Ricoh Women's British Open and completed the Career Grand Slam by winning all major championships. “I trust the Srixon Z-STAR series not just because of its great distance, but also for its strong performance in the wind and superior stability”, says Park. As one of the legendary golfers on the LPGA Tour, she continues to pursue more trophies.

Keegan Bradley (USA) won the 2011 PGA Championship at Atlanta Athletic Club, Georgia, in his first major championship attempt. In the final round, Bradley seemed done after he made a triple-bogey on the 15th hole to fall five shots behind the lead with only three holes to play, however astonishing back-to-back birdies on the 16th and the 17th put him back into a three-hole playoff, in which he went on to win by one shot. Bradley added his name to the great list of major champions and the Srixon Z-STAR series contributed to his historical victory.

The Srixon Z-STAR series has won 4 times at the World Golf Championships, known as the second biggest stage to the Majors, and there are only two events that are missing from its collection of WGC titles. Let’s see who will be the ones to capture the remaining two trophies.

For further information on the Srixon Z-STAR and all other Srixon golf products, as used by the game´s best players, visit www.srixon.co.uk.