Getting into golf: Terre Blanche - Working with Jean-Jacques Rivet

In this new series of articles Kim Dowsing, the partner of regular Golfshake contributor and sports writer Derek Clements, writes about the experience of taking up golf for the first time.

"Pack your case kiddo, we are going to Nice," he said. "And we will be taking your golf clubs."

A few days later, the following:

"Kimmy, I didn't tell you the entire story. We are going to Nice, or at least we are flying to Nice. And then we are heading to Terre Blanche, where you will be working with Jean-Jacques Rivet. He is a biomechanist, and he works with the best golfers in the world, including Lyida Ko and, erm, me. The man is a genius. And Terre Blanche - well that is a five-star resort that you will adore."

So let me put you fully in the picture. When the announcement was made, I had only been hitting golf balls for about three months. I admit that I had hit thousands of golf balls under the guidance of Derek, my partner (henceforth referred to as Himself) who is a seven-handicap golfer.

I had always wanted to learn to play golf and finally I was doing it. Himself said he would teach me the basics, and he has fulfilled his side of the bargain. In fact, I happen to know that he has been rather impressed with my early efforts.

But JJ Rivet? He would have to be a genius. After all, I had not set foot on a golf course. I knew the driving range at Dunston Hall, near Norwich, backwards and I had ventured onto the practice putting green and had even managed to hole a few putts. But surely I was nowhere near ready for this step?

"I want you to learn from the best, and JJ is the best," said Himself. "He knows you are a beginner and he knows your limitations. He will get the basics right for you and then we will sort you out with a series of lessons. You will be flying. Trust me, I know what I am doing. Have I ever let you down?"

And so it was that I found myself sitting in front of the great man, telling him what I wanted to achieve with my game. Himself tells me that he believes I can be playing off 18 within a year. I have doubts, but he told me to trust him, so I do.

It was only when we walked into JJ's practice bay that I became fully aware of my shortcomings. I didn't want to embarrass myself and I didn't want to waste JJ's time. He told me to warm up by hitting some seven-iron shots. 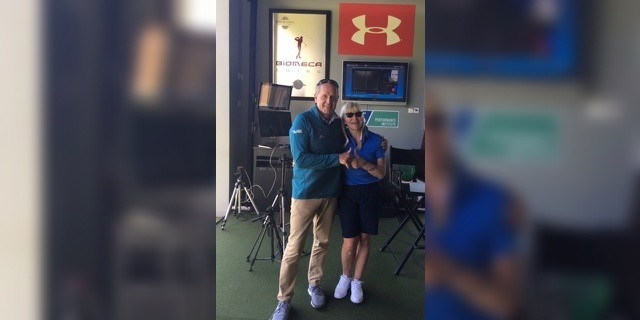 All the while, JJ sat and watched, every so often turning round and looking at the monitor behind him which was recording everything I did. I could sense Himself willing me on, but the harder I tried, the worse it got.

Then JJ summoned me over to look at my results. There was good news - my foot grounding (more of which later) wasn't too bad. The bad news - pretty much everything else was in dire need of assistance.

The first thing he addressed was my grip. Himself had taught me to play using the Vardon grip, but I was advised to try the interlocking grip and to turn my left hand more to the right so that I could see a couple of knuckles when I looked down.

But my biggest problem was that I wasn't releasing the club at impact. Instead of a straight right arm, my right elbow was bent and I was clearly trying to scoop the ball up into the air. I was also trying to hit the ball too hard - something you-know-who had been telling me to avoid.

JJ told me to hit some shots with my new grip. Straight away, it felt more comfortable. I have a touch of arthritis and after hitting 100 balls on the range my left hand had been hurting. Astonishingly, there was now no discomfort.

He disappeared for a moment and came back with an impact bag. "I want you take your club and swing and, as you hit the bag I want you to focus on keeping your right arm straight,' JJ explained. "This will give you the impact position you require. Without doing this properly, you cannot play golf."

I did as instructed, repeatedly. Sure enough, it felt completely different. "Now do it with the ball," he said. I tried, really I did. But still it didn't click. Back to the bag. I was recorded hitting the bag. "Look at this Kim," said JJ. He played the recording back to me. "This position you have at impact when you strike the bag is perfect, as good as it could possibly be. But you need to do it with the ball."

Eventually, I managed to connect properly. "Yes! This is golf," said JJ triumphantly. "Above all else, you must work on this because it is the key to the game of golf. Now I am going to leave you to hit golf balls for at least another hour and when we come back tomorrow we will take the next steps."

At this point I was "rescued" by Thibaut, JJ's assistant, who reminded me that I was due at the Terre Blanche Spa for a massage arranged for me by Himself. Now you may believe that you have experienced a spa before but I am here to tell you that until you have seen this one, then anything else has been a beginner's class. It is a stunning building and it offers every treatment known to man and woman. Unsurprisingly, it has won a series of awards, and it is not difficult to understand why.

My experience began by being offered a choice of five oils - I opted for a citrus based oil which smelt like heaven. I was advised I would be receiving a full body massage, and was asked where I wanted the focus to be. After my time with JJ I asked if she could pay more attention to my back and shoulders to help ease my aches and pains of the day.

The massage was amazing and relaxed me to the point of dropping off. When I was tapped on the shoulder asking if I was ok - I replied sleepily - "Yes."  I did not want it to end, the scent of the citrus oil on my body was so intense and my skin felt like silk.  I was offered a glass of water and then the chance to go into the relaxation room before moving on the the beautiful pool to end my spa experience.

I was at the range raring to go at 9am the following morning. JJ was none too impressed to learn that instead of choosing to hit golf balls the previous day I had opted to have a full body massage. So he quickly went through everything he had told me the day before and sent me off to warm up.

Before we go any further, let me tell you about foot grounding. If releasing the club properly at impact is the most important part of the golf swing, then correct foot grounding comes a very close second. Himself has visited JJ on two separate occasions and reduced his handicap by six full shots, and he attributes it all to learning what to do with his feet during the golf swing.

Essentially, the important thing is to keep your feet on the ground throughout the swing - even on the downswing, you should keep your right heel on the ground as long as possible. It helps to prevent you from swaying and it encourages a more powerful, more consistent move through the impact area. Thanks to my pre-Terre Blanche introduction to the game, I had already had this drummed into my head.

"Right Kimmy, what we need to look at now is extending your shoulder turn and getting the club into a good position at the top of your backswing," said JJ. "What I want you to do is to take your address position with your right heel off the ground and as you start your backswing you put it back on the ground and lift your left heel."

He made sure that I took plenty of practice swings using this technique and even before I hit a golf ball I could feel that my shoulder turn was bigger and my backswing was longer. Once again, hitting the ball was a different matter. It felt right, but I was still being hampered by not being able to release the club properly at impact. Occasionally, I would flush one and JJ would shout: "Yes, Kim. This is what we are looking for."

To help encourage the release, the next exercise was to have me swing my seven iron using only my right arm. "Do not try to hit the ball too hard because if you do, you will miss it," JJ said. He was right. He told me to imagine that I was brushing the ball off the surface and reminded me that I needed to make contact with the ground if I was ever going to be able to hit the golf ball properly.

To be honest, this was a painful process, but eventually I improved.

I soon realised that of all the things he had shown me, the one that was most likely to work for me in the long term was where I started my swing with my right heel in the air. It gives me the feeling of being in the right place at the top of the swing. And the following words will ring around in my head for ever: "You are being too aggressive. You need to hear music in your head. Find the right music and you will find the right position."

He told me that to encourage the right feeling at impact I should be using thicker, softer grips on my clubs - an added bonus is that his would alleviate any discomfort in my fingers from my arthritis.

To help me learn the right techniques, develop the the right muscles and the correct muscle memory to be able to repeat the correct swing over and over again, Thibaut gave me a series of exercises devised with JJ. These are based around my size and the parts of my body that I need to strengthen to develop the balance I need and the feeling that I am releasing the club properly. They all take into account my flexibility, which had increased dramatically between day one and day two in Terre Blanche, and are designed to get me in the correct position. 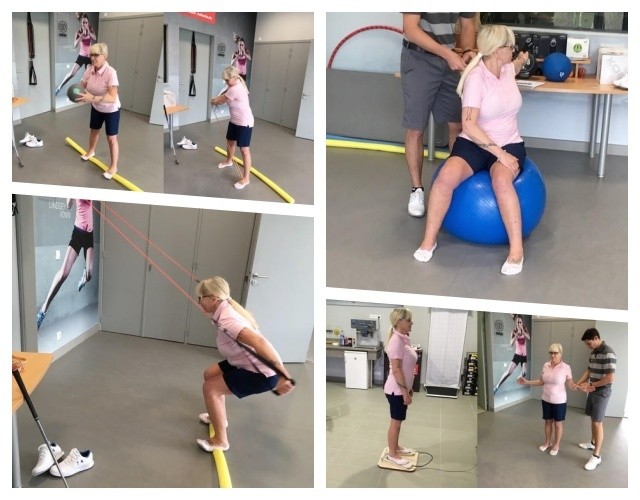 Kim's balance and flexibility is measured, allowing Jean-Jacques Rivet and his team to work out where improvements can be made. She is then given a series of exercises designed to improve her flexibility and strengthen her core.

I left Terre Blanche knowing how lucky I had been to have had the opportunity to work with this man and when we got home I couldn't wait to head down to the driving range and hit more golf balls. And do you know what? When we got there and I started pounding my 100 balls.

I had a Eureka moment. The feeling where it all kind of clicked into place and made sense. I know that months of hard work lie ahead, but I also know that I really do have a chance of getting my handicap to 18 by this time next year.

And JJ? Himself was correct. He IS a genius.