TYRRELL HATTON and Ian Poulter led a chorus of approval for the changes to the course at Wentworth ahead of the BMW PGA Championship. Hatton can't wait for the action to begin, saying that the tournament is his favourite, which is praise indeed for a man who has soared to 16th in the world rankings, has just enjoyed a phenomenal run on the PGA Tour and is eligible to play in all four major and the entire World Golf Championship series.

"The changes I have seen at Wentworth look really good," Hatton said. "And the greens are a hundred times better. The course is playing pretty firm, as well, so it should be interesting. And the rough is certainly a lot thicker than I've seen it in the past three years."

The young Englishman said that he had enjoyed his time in America and that it had done wonders for his confidence. "I really enjoyed my time in the States. I got off to a really good start, which was great for my confidence," he said. "To get off to that fast start and get my temporary membership as fast as I did was good for me. The last month didn't go too well, but these things happen, and I'm much happier now I'm home. Hopefully I can play well this week and enjoy a bit of home time before the US Open.

"Doing well in the first few events, and just knowing that I can compete on the PGA Tour, did wonders for me.  The golf courses are set up different than they are over here, and I was happy with how I adapted.

"I feel I've gone about my business fairly quietly, or slightly gone under the radar and surprised a few people. There's certainly a good group of young players coming through, which is really good for English golf, and hopefully we can all keep winning golf tournaments. And for me, it would be nice to climb even higher on the world rankings." 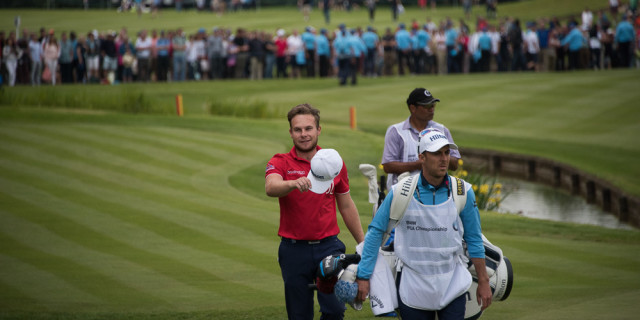 Hatton said that if he wants to win the BMW PGA Championship that the key will be to hit as many fairways as possible. The recent good weather means there is plenty of run on the ball, replicating the sort of conditions he faced during his spell in America. He said that although much is made of the different conditions, he believed that the only real difference is in the greens - on the PGA Tour they tend to be fairly soft, while in Europe they are far firmer.

He also welcomed the bigger purses on offer in the European Tour's Rolex Series. "The big prize money on offer will hopefully mean that the best European golfers who play so much of their golf on the PGA Tour will want to come to Europe in the summer because, for me, it is the best place to play. We have a really good run of tournaments in the build-up to The Open, and hopefully the guys will come over and play and it will be well supported."

Poulter was also delighted with the changes to the course. "I've been spoilt through years of having perfect putting surfaces wherever we go and play golf. And then when you get bumpy greens, you get a little soft, and you start to moan and bitch about missing short putts," he said."The greens were bumpy. I don't think they were as good as everyone would have liked them to have been. I don't think that's a secret to anybody. You could play an average golf course with perfect greens, and you'll find all the pros turn around and say what a fantastic golf course - you can have an amazing golf course with terrible greens, and unfortunately you're going to get guys that are going to bitch and moan about how bad the golf course is."

He admitted that his record at Wentworth was disappointing, but that he hopes to put that right. "As long as I can remember being a kid, coming around watching Seve and Woosie and Faldo and all the guys, Ollie and everyone play this great golf course, you remember it. Everyone knows Wentworth and it really should be one of the best courses on the rota that we play. My performances around this golf course are not as good as I would have liked them to have been. It's certainly a course, being a golf fan as a kid and walking around watching the greats play this golf course, it's a tournament where I feel I should have played a lot better. Why I haven't performed as well as I have around this golf course, I'm not really sure.

Poulter's season has been transformed by his performance at the Players Championship, where he finished second and thus secured his playing privileges for the rest of the season and into next year. He admitted that his play at Sawgrass had been a huge relief. "I can't emphasise how big a week it was. Playing well at The Players, to take care of my playing rights over there, to take care of a big move in the world rankings, to enable me to travel back across the pond to play this week, to be able to play a string of events in Europe this summer, was something I really, really wanted to do. And obviously a few weeks ago, I couldn't commit to that.

He plans to play in the French, Scottish and Irish Opens, hoping that his form in those tournaments, and at Wentworth, will see him climb back into the top 50 in the world and get him into the field for The Open at Royal Birkdale.