Interview: Guerin Rife - The story of the Evnroll putter

The Evnroll putters first appeared on the golfing market at the 2016 PGA Merchandise Show in Florida and pledged to deliver a better roll to golfers with “The Sweetest Face in Golf”.

But many golfers are unaware that the Evnroll putters are designed by fabled designer Guerin Rife, the designer of the Rife putter.

Golfshake’s Owen Davies caught up with Guerin at the 2017 PGA Merchandise show recently to talk about how the Evnroll came about:

“Well, Rife was first. I've been doing that for years. I sold the company about eight years ago and then I kind of stayed out of the environment and just did a little small line first, with my first name Guerin. But I pretty much tried to be invisible and stay out of the picture,” said Guerin.

“Then all of a sudden I came up with this new concept that I wanted to get the ball to go the same distance no matter where you strike it and that was the initial approach.” 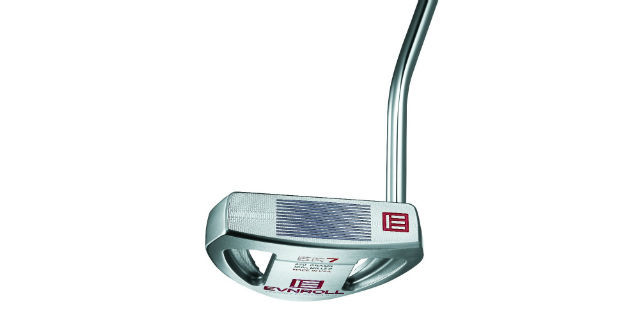 Many golfers do not know that it was Guerin who thought of the idea of putting grooves on the face of a putter:

“I invented grooves 20 years ago so I know what grooves do. Grooves don't hit the ball as far. For every tour player that I ever talk to, in the initial stages, enjoyed my original Rife.

“They'd say the Rife didn't go as far as Odyssey or Scotty or whatever. And the reason is that when you put a lot of grooves in and have very small contact spaces between the grooves, there's less contact surface. So the ball just doesn't get as much energy transfer.

“As you go away from the centre to either side you get more energy transfer because more contact surface and that'll make up the difference of what it wasn’t doing when you hit a typical putter mishit.”

Testing new putters is the key to producing a market leader and is something Guerin knows a lot about.

“I've done a lot of robot testing. So a 25ft putt would go, if it hit the middle, 25ft.  If you hit it a half inch off-centre it would go 23.5ft and about 6 to 8 inches off line, away from the centre. Because the centre of mass is in the middle and when you hit away from that you see the line wiggle on the ball. So the line wiggles a lot when you're a half inch off centre. That's because it's deflecting. So it starts off on the wrong path.

“Eight inches is significant. You miss the hole by a lot and very often, I've found this on tour after I started testing on it, I was watching those replays in slow motion where a guy would push the ball and you would look and say "well, he hit that over toward the toe" and he pushed that ball. But he didn't push it, he mishit the ball. It was a mishit.

“His putter was square and fine. But of course he didn't know that so he's trying to fix something that doesn't need to be fixed. So mishits are very common.”

However, where does a fabled putter designer get inspiration when designing a new putter? Guerin revealed where he got the inspiration for the new Evnroll putter.

“I have a test that I started doing in my office. So I gave myself about a quarter of an inch to hit the ball in between two magnets. That shouldn't be too hard. I'd have tour players and top amateurs, all types of players, try this and they'd say "well I don't think I need this technology because I don't really mishit the ball.”

“The world record was 2 out of 10 without hitting the magnets until recently. And these are really top players. It became fairly obvious. You know you mishit about 95% of the time, maybe more. It's hard not to get that little line to wiggle.

“So, I started working on this concept where I was increasing the contact surface away from the centre on both sides and I dialed it in to a point where everything went the same distance.

“I didn't plan on that. Probably the most significant thing about this new technology is the thing I didn't plan. The fact that the ball gears back to the centre so that being really wide like a V, when it hits the V it goes towards the open position so straightening up your putts.

“So, what this was doing was getting the ball to hit that the same distance. I got the distance thing right and the little gift that god gave me was this little discovery was that the ball started to come together.”

With golf being a game of inches, it is clear to see how important attention to detail is in the design stage.

“I corrected the eight inches off-centre. So everything ends up the same distance in the same spot and hence the name Evnroll.

Although, in the early days, adding grooves to the face of a putter is not something that had ever been seen before and some professional’s even dismissed that it could work.

“So that was the foundation of the face technology. You see, I've always been a technology guy and I introduced grooves and back in 2000,” Guerin added.

“I was this whacky person out there on tour. You know "this guy's crazy, he's putting grooves on a putter." Well, there's a few putters with grooves now isn't there…”

“But anyway, after that it was just a matter of using my experience in design and I started doing a lot of things with this putter that I learned over the years.

“I started with four simple designs. One was a PING Answer style, Then there was a wide square answer style (shorter but wider) and then there's the mallet and the one that's more popular, like the Odyssey #7 with the prongs that looks like a fang.

“So I did that and those were the three stainless steel designs. And I did one high MOI design, which is a concept where I put all the weight in the middle. To make it legal, the sides are hollow but the centre area behind the ball, it goes back in an elongated shape. All this is 85% of the putters weight.

“The USGA approved it but when you look at the putting you'll see these are hollow so the edges weigh nothing and there's a steel weight plugged into the back of it.

“That putter is 3,000 MOI. That's pretty significant. But it's all behind the ball so when you swing it, if you took a blade putter and you turned it sideways and putted with the toe, you would find all the mass would be on the swing plane.

“My game improvement putter that make it easier to putt. The rest of them are classic designs and I milled them out of stainless steel and I make them in the USA.”

Guerin always likes to produce his putters close to home and reiterates the attention to detail needed to create a market-leading putter.

“I'm right there in the machine shop. I go over to the machine shop and work through the problems. We get little issues but there’s no communication problem. The finishing is done in San Marcos, next to Carlsbad. The finishing these guys do is beautiful work. They do Bettinardi stuff and they're masters at what they do and they're very consistent.

“Anyway, the designs are all completely milled, finished, symboled and then I put the shaft into the head without a hosel. Ill tell you why.

“The typical PING Answer for example has what is called plumber neck. For assembly it's great. You just plug the shaft straight into a hole no problem. But, that hosel sticking above the putter, unless you virtually whack off the back of the putter, that's 45 grams.

“That moves the centre of mass over towards the heel and it's about 1/8 of an inch or can be up to 1/4 of an inch. And so, the heel is heavier so the sweet spot is not where the line is.

“So what I've done, is instead of doing a hosel, is I took a shaft and bent it near the head. I have a single bend, and when that bend starts and goes into the head, you take that weight and add that to the heel. That piece of shaft weighs 5 grams. The hole that I have worn out of the head to put it in is solid steel weighs 5 grams.

“And so the putters are very balanced so that means that every head that we do has a centre of mass that is absolutely in the middle.”