IT WASN'T pretty although in the end it was comfortable enough. Rickie Fowler claimed his fourth PGA Tour title with a four-shot victory in the Honda Classic at PGA National in Florida, but boy did he make hard work of it.

It was the first time in five tries that Fowler had been able to turn a 54-hole lead into a victory, and was his first PGA TOUR victory since September 2015. In the end, he shot a final round 71 on Sunday to finish at 12-under 268, just one short of tying the tournament record. Gary Woodland and Morgan Hoffman were joint second on eight under.

Fowler opened with three pars and when he birdied the fourth he was cruising, but a wayward drive cost him a bogey at the fifth hole and when he drove into the water at the sixth and ran up a double-bogey six he was leaking oil in a major way. Unfortunately, his playing partner, Tyrrell Hatton, the 25-year-old Englishman, couldn't take advantage - he dropped a shot at the first and was two over par for his round after four holes.

Playing in front of his adoring hometown fans, Fowler did eventually manage to stop the bleeding in a way that world-class golfers are able to. After reaching the turn in 37, two over par, he birdied the 12th and 13th holes thanks to holing two monster putts, and he picked up another at the 16th after hitting a five iron to three feet. But the drama wasn't over yet. His tee shot at the par three 17th found the water, but he struck his next shot to five feet and managed to salvage a bogey. And he dropped another shot at the last, but he was so far ahead that it didn't matter.

Fowler said: “Being out front and getting the job done, especially with giving some back and having to fight back with it was what pleased me most. I started with a four-shot lead and I still won by four, so I didn’t play great, it wasn’t a pretty round, but we got the job done. A win’s a win.”

“I would much rather have just won by 10, but being put up against the wall, you either play golf now or you’re not taking the trophy home. I knew what I needed to do.”

Hatton got his round back on track after his poor start and although he was clearly not happy at shooting a 72, when he calms down he will reflect on the fact that he finished joint fourth and proved to himself that he is right at home at this level.

Details of the COBRA Golf Clubs in Fowler’s Bag:

THEY say that a change is as good as a rest, and that certainly turned out to be the case for Darren Fichardt as he claimed his fifth European Tour title with victory at the rain-affected Joburg Open.

Fichardt birdied the final hole for a final round of 68 and a 54-hole total of 15 under par, giving him a one-shot victory over Stuart Manley and Paul Waring. As an added bonus, Fichardt, Waring and Manley claimed the three qualifying spots available for The Open at Royal Birkdale in July.

The South African has been playing well for weeks but has struggled on and around the greens. On Wednesday he decided that it was time both for a change of putter and, more radically, a change of grip. So, for the first time in his life, he opted to adopt the claw grip when the tournament began and, lo and behold, the putts started to drop.

"To be honest, it has been a struggle for me on the greens," he said. "I have been playing really well for a while now, but just haven't been able to buy a putt. The old putter has done its time and it owes me nothing, but it was time for a change, and I also opted to try the claw grip and see what happened.

"What pleases me most of all, however, is that I have proved that you don't have to be a bomber to win tournaments. The guys I was playing with were hitting the ball miles past me but I kept it in play and hit a lot of good shots, and it was good enough." 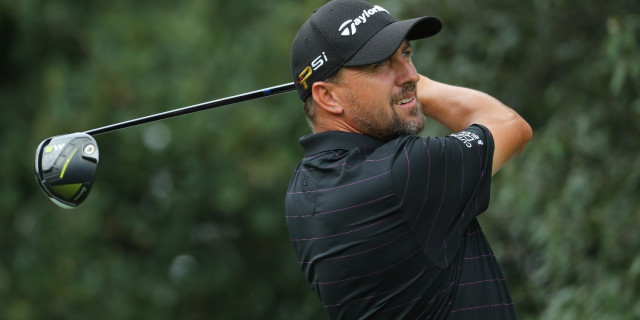 As Fichardt walked off the 18th green, fellow South African Brandon Stone rushed out and sprayed him in champagne. It was a memorable moment for one of golf's good guys.

After torrential rain, the decision was taken to reduce the tournament to 54 holes, and huge credit must go to the greenkeepers, who worked tirelessly to make the course playable.

Manley had set the clubhouse target on 14 under par courtesy of a third-successive round of 67, with Waring seeing a 12-foot birdie putt to move to 15 under on the last lip out. His 69 was good enough to give him a share of second place.

There was another two-hour delay before play resumed on Sunday morning but Fichardt, who began his third round tied for the lead with Waring, started brightly when he finally teed off. The 41 year old birdied the first, sixth and eighth to get to 14 under. Fichardt rolled in his six-foot birdie putt at the 12th to join Jacques Kruyswijk at the summit, but after his countryman carded a disappointing double bogey at the 14th, Fichardt saved par at the same hole to sit two shots clear of the field.

Fichardt's lead was cut to a stroke when Waring and Manley picked up shots at the 16th and 18th respectively. And he dropped into a share of the lead when he carded his only bogey of the day at the 17th after narrowly missing his tricky par putt. But he got up and down for a crucial birdie at the par-five 18th to secure the win.

He said: "I decided at the beginning of the year that I was going to play as many tournaments as I can and just get my game right. And yeah, it worked out.  It’s good to win again. It’s just nice to see hard work paying off. It’s very nice!”

What's In the Bag:

Manley began the day two behind Waring and Fichardt but birdied the first, fifth, sixth and seventh to move to 13 under. The Welshman rolled in his ten-foot birdie putt at the tenth before a double bogey at the next saw him drop back to 12 under. The 38 year old then parred his next five holes before finishing with back-to-back birdies.

Waring made the perfect start to his third round, notching an eagle at the first to take the outright lead, before pulling off a good par save at the second. After dropping a shot at the third to fall to 12 under, Waring fired his first birdie of the day at the fifth to head back to the top of the leaderboard.

The Englishman reached the turn in 34 after going birdie-bogey-birdie from the seventh before dropping another shot at the 12th. A birdie at the 16th saw him move back to 14 under, and when Fichardt carded a bogey at the 17th, Waring was in a tie for the lead. But his 12-foot birdie putt at the last refused to drop and Fichardt rolled in from close range to win.

James Morrison, Stone and Kruyswijk finished in a share of fourth place on 13 under.