JORDAN SPIETH may have rubbed up a few people the wrong way with his comments about "scum" fans, but the American has a point.

Spieth is cut from the same cloth as Phil Mickelson, and that means he will spend hours signing autographs and engaging with genuine golf fans. What got his goat at the AT&T Pebble Beach Pro-Am was the manner in which young children were brushed aside by adults looking for Spieth to sign merchandise. And there's the rub - they were not asking him to sign autograph books or programmes, but were asking him to sign caps, golf balls and the like.

The American is a smart cookie, and didn't need anybody to tell him that these people were then putting these caps on eBay and selling them for a healthy profit. As Spieth quite rightly asks: "Why should they make money on my name?" The fact that these individuals became seriously verbally abusive towards Spieth when he challenged them would suggest that he got it spot on.

"It's not really worth me spending time arguing, but I'm just not really appreciative of people who travel to benefit off of other people's success," Spieth said. "I enjoy signing and I sign for kids whenever we get the chance, but these guys have these items that you've already seen online.

"Our team keeps track of that kind of stuff, and these guys just have bags of stuff to benefit from other people's success when they didn't do anything themselves. Go get a job instead of trying make money off things we've been able to do. We like to sign stuff for charity stuff or for kids or... and if you ask anybody universally it's the same way, it's just, they frustrate us." 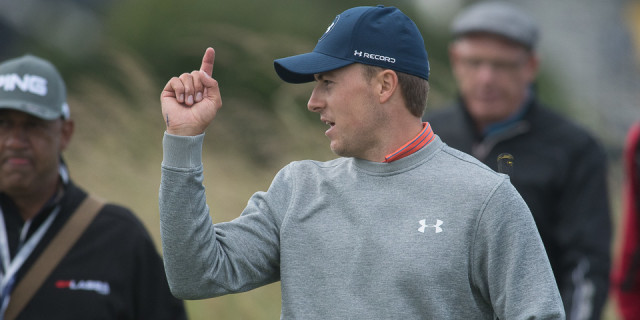 "So I turned around and one of them dropped an F–bomb in front of three kids, so I felt the need to turn around and tell them that that wasn't right.  And a couple of them were saying, ‘You're not Tiger Woods, don't act like you're Tiger'. I mean, it's just like, 'Whatever, guys. You're still trying to benefit off me and I'm not even Tiger Woods. So, you know, what's that say about you?'.

“I was just a little frustrated at the end and I didn't appreciate the language that was used and just some scums that just, it just bothered me.”

As Spieth walked off the final green after winning The Masters in 2015, his father was quick to tell him to go back and acknowledge the galleries, the scorers and the volunteers who had followed his match. Jordan is made of the right stuff, and his parents and family should be proud of his actions. Hopefully, others will follow his example and snub these odious individuals.