Mobitee and PIQ have joined forces to bring you the latest multi-sport sensor that allows you to track every single shot of your round. The importance of game tracking has grown over the last few years and thanks to devices such as Mobitee and PIQ, you can effortlessly do so via GPS shot tracking.

Before you hit the course, you need to make sure you have your PIQ device set up correctly. First of all, you need to download the Mobitee app and create a login, which is free. You then need to attach the small tags to the end of each designated club. On the underside of each tag, it tells you which club it is for.

It is also important that you pair your PIQ device with the Mobitee app. You need to turn your Bluetooth and PIQ device on, head into the app and click the “PIQ Driving Range” option. The app then scans devices around you and your PIQ device should appear on the screen. Simply select your PIQ sensor and click on PAIR. 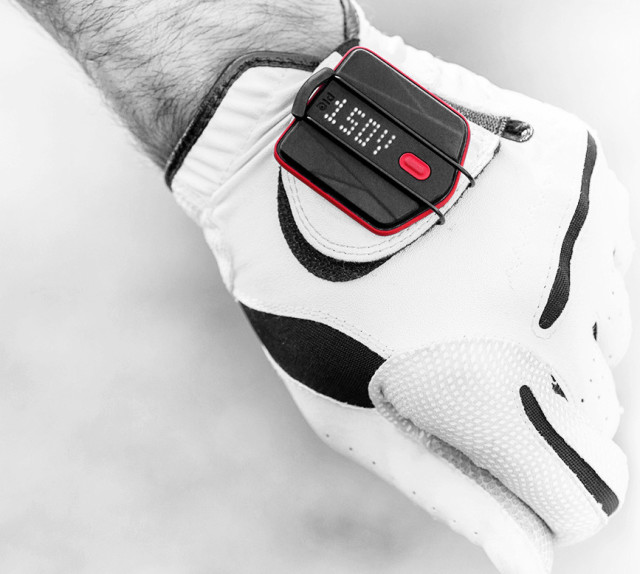 How does it work?

Before you play each shot you hold each tag against the PIQ sensor, which ideally will be attached to your glove thanks to the velcro attachment, and wait for the LED display to confirm the club. You will know the device is tracking this shot as the name of the club will pass across the LED display. You can take as many practice swings as you like, as the PIQ device will only pick up the final swing.

For the best results, the PIQ should be attached to your glove. This is because the device will offer feedback on club head speed, tempo and your swing plan. When you approach your next shot, simply do the same process over again. Thanks to GPS signals, the device and app will pick up where you are on the hole and hence offering the ability to track every shot.

Another feature of the device is that it will offer you yardages to the centre of the green on the PIQ’s LED display. In the past, you would have to keep getting your phone out of your pocket to get distances from the Mobitee app. It is also important that you keep your phone in your pocket, for two reasons. First of all, Bluetooth only has a short range and if you leave your phone far away in your bag or buggy, then you may lose connection and hence not track any shots. Secondly, your phone receives a GPS signal and if your phone isn’t exactly where you are, the yardages on the LED display won’t reflect where you are.

Not only can you track data on the course, but you can also collect swing data while on the driving range, which is another useful feature of the Mobitee and PIQ device. 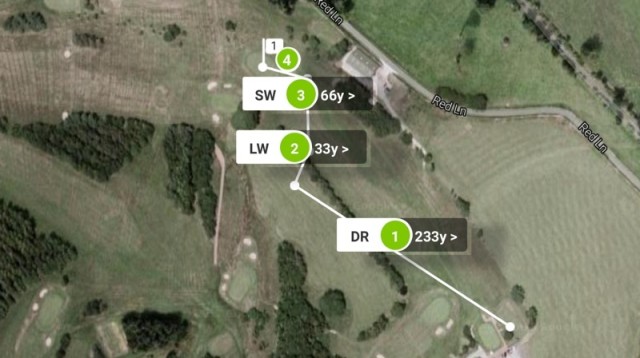 Accessing your stats after a round can be achieved via the Mobitee website or from the app itself, and both bring up the exact same results. The great thing about the PIQ device and Mobitee is that you do not need to plug the device in to find your results. You can do so straight from the app and if you use the website, you log in by typing in your phone number and the code you will then receive via text.

For the most part, the device does track your game well and accurately. However, as it relies on location detection, you will realise on the course map in the app or online that you are not always positioned exactly where you were on certain holes. At the moment, there is no way to edit this or the extra shots that may appear on the screen. The extra shots appear when you swing the club and don’t use it again for a few minutes. For example, I was stood on the brow of a hill waiting for the group in front to clear the fairway and made a couple of swings. Having then walked 50 yards back to the tee and hit my drive, the device assumed I had teed off on the hill, back to the tee and then moved on.

After your round, you can pick up various stats via the app or online. By clicking on successfully tracked shots on the GPS satellite image, you will get results on club head speed, swing duration, backswing duration and downswing duration, displayed on easy to understand graphics. You will also get a PIQ score, which is a combination of your swing plan, swing speed and tempo. The best score you can achieve is 10,000, so the closer you are to that the better. 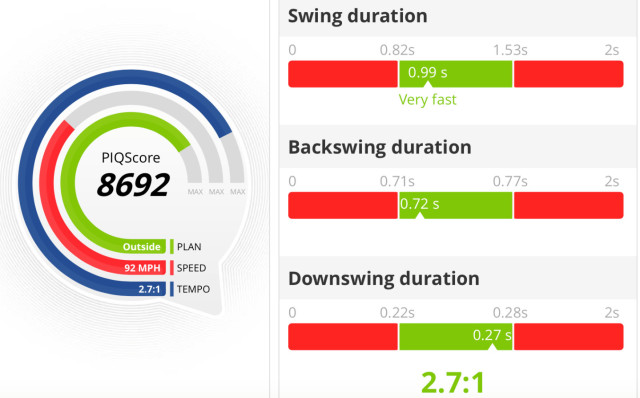 Other stats include your driving average, putting average, best drive, scoring averages on par 3, 4 and 5s, greens in regulation, putts per hole and putts per GIR. This is on top of offering average yardages for each club. From these stats, you will realise what part of your game needs a little work, whether it be sorting out your swing plane, or trying to become more deadly with the putter. 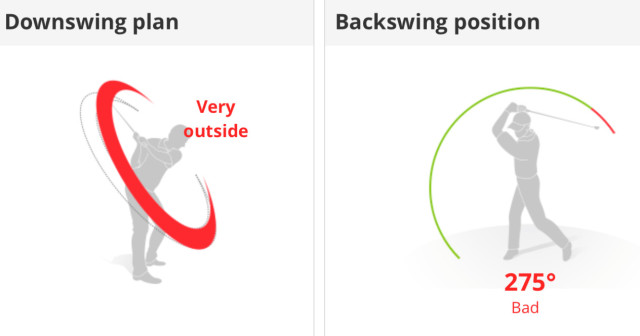 Another feature of Mobitee is that you can connect with friends and other golfers. You can compare stats, as well as upload photos and videos to make the Mobitee experience a little more enjoyable and bring together golfers from around the world.

For the most part, the PIQ and Mobitee device is very impressive for those keen on stats and always looking for new ways to improve their game.

The only negative I would say would be not being able to easily edit your round. If you stick with it, and make tagging every shot correctly second nature then it will definitely help you improve your game.

If you are looking for golf tech that can provide basic GPS data, full shot tracking analysis and on course swing analysis then this could be the perfect device.  RRP £199