What do Michelle Obama, Piers Morgan and Laura Davies all have in common? Well, for BBC Breakfast presenter, Strictly Come Dancing contestant and Celebrity Mastermind star Naga Munchetty, they would be part of her dream fourball.

The BBC presenter opened up to us about her love of the Ryder Cup, her role in the #ThisGirlGolfs campaign and a mishap early in her golfing career involving a jacket and pair of mittens sewn into them.

Talking about her dream fourball, Naga said: “This changes all the time and depends what mood I’m in. At the moment, how about Michelle Obama (I’m not sure if she plays but I hope she does), Piers Morgan (we beat him with tv ratings every morning so would like to do the same on the golf course) and Laura Davies. I’ve played with her quite a lot and she has a wicked sense of humour and would easily outdrive Piers to keep him in his place.”

It was the Ryder Cup that helped kick-start Naga’s love for the game and went on to win Celebrity Mastermind in 2013 with her specialist subject being Ryder Cups between 1979 and 2012. Naga said: “I like all big sporting events – it’s difficult not to get caught up in the passion of them – but I found the Ryder Cup particularly engaging once I began playing golf and understood more about matchplay  and the game in general.”

Since then, the BBC Breakfast presenter has been given various opportunities to play in some big Pro Ams alongside some of the world’s best players. While discussing her favourite moment from her golfing career so far, Naga said: “There are too many to mention. Playing with Laura Davies, Charley Hull, Colin Montgomerie and Alvaro Quiros at various Pro Ams from the Ladies’ Scottish Open to the BMW PGA at Wentworth would be up there. I’m very lucky to be invited to such events.” 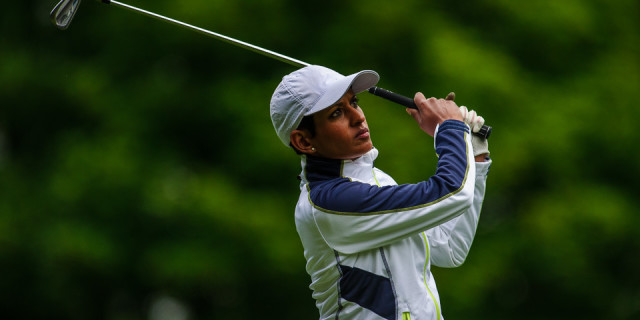 As for fashion on the course, it is safe to say that Naga isn’t afraid to wear some bright colours that really stand out on the fairways.

“I wear all sorts of brands and I love bright clothes. One of the things that put me off golf before I started playing was the boring colours and designs. Clothing manufacturers are definitely wising up to the fact that fashion certainly belongs on the golf course.

However, this isn’t to say that the presenter, who admitted her favourite 19th hole tipple would be a Gin & Tonic in the summer or a Malbec in the winter, hasn’t had a fashion faux-pas of her own on the golf course.

“When I first started to play and had the challenge of facing the cold in winter golf , I decided to sew my big mittens to a plaited piece of wool and thread it through my jacket (like we did as children) so that I wouldn’t lose them. I hadn’t quite thought it through. Use your imagination. My tee shot on the first tee was a jumble of mittens swinging around the club and just a big tangle!”

The #ThisGirlGolfs campaign was inspired by Sport England’s #ThisGirlCan campaign and is something that Naga is keen advocate of and believes that any women looking at getting into the game should “do it” because “if you don’t try it, you won’t know if you like it.” With both male and female memberships dropping each year, this campaign can hopefully increase the number of female golfers taking up the game.

“#ThisGirlGolfs is a campaign the show that golf is for everyone and is an attempt to break down the barriers that many people think are in place. Golf is fun; it’s for sassy women and is competitive. It shouldn’t be snobby or elitist – trust me, women like me don’t put up with that nonsense.”

“I think professional female golfers do a lot for the game. What about the media showing more women’s golf and sponsors taking more of an interest?” said Naga when asked if enough was being done to promote women’s golf.

Although most work a nine till five job, Naga undertakes a much different working day that begins in the early hours of the morning and ends before midday. This in turn leaves ample time to hit the golf course, even during the winter months. But with such an early start, just how does Naga find the energy to do it?

Most recently though, Naga had to take time away from the golf course to focus on her dance moves, as she appeared on the latest series of Strictly Come Dancing.

“Strictly Come Dancing was great fun, but it certainly didn’t help my golf as I was training every day apart from Sunday. I’m still trying to get back into playing golf regularly but the cold weather isn’t helping.”

Naga wasn’t able to follow up her success on Celebrity Mastermind with another win on Strictly Come Dancing, as her and her dance partner Pasha Kovalev were voted off in episode four, after a dance off against pop-sensation Anastacia. But the all-important question we put to Naga was: What would you prefer, a perfect ‘40’ on Strictly or a hole in one?

“Well, I’m now never going to have the chance to get a 40 and I’ve had a hole in one… You never can have too many I suppose.”

Photos by Kevin Diss Photography at the 2016 BMW PGA Championship