A new range of Golf eBooks - based on a similar approach to the neuroscience currently being used by England’s footballers in the World Cup - have just been released. The books help all golfers hit better shots and shoot lower scores.

The three-title series has been written by Jon Finn of Pre-Shot Golf. Finn is golf psychology consultant to the Professional 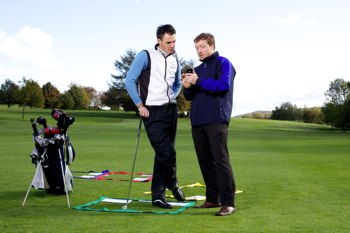 Golfers’ Association of Great Britain and Northern Ireland and works at the association’s National Training Academy at The Belfry, in the UK.

The books contain Pre-Shot’s revolutionary training system which uses simple, practical golf psychology. It is related to the approach employed by Roy Hodgson’s England squad, via their work with sports psychologist Steve Peters, who previously worked with Team GB’s medal-winning cyclists at the 2012 Olympics.

“I believe these new eBooks will help golfers of all standards immediately begin improving their game, whether they are still learning the sport, a keen club player or an aspiring professional.”, said Pre-Shot Founder Jon Finn.

“They give a step-by-step and enjoyable guide to implementing our unique system and gets the golfer involved in practical exercises, hitting golf balls.  But the good news is that no swing changes are needed, the books help golfers change the way they think.

“The Pre-Shot training system is based on highly robust neuroscience and the latest understanding of how the human brain performs in sporting situations and in broader life”.

Finn added,”Hundreds of people, including professionals have already benefitted from the training. If you’re a player of any level the eBooks will enhance your ability to hit better shots and shoot lower scores. If you’re a golf pro they will transform your teaching”.

The three eBooks are available on Amazon Kindle.

As well as key principles such as building a solid physical routine, building a robust mental routine and setting goals, they combine to show six key lessons:

Lesson 1 - Stop concentrating on the wrong things when you strike the ball, Lesson 2 - Stop destroying your confidence after your shot; build it instead, Lesson 3 - Stop doubting yourself as you set-up to the ball, Lesson 4 - Stop ignoring Activation; begin your routine with it, Lesson 5 - Stop making poor decisions on the golf course and Lesson 6 - Stop letting your Monkey Brain win; play and practice properly.

Golf is arguably the most mentally demanding of all sports and the Pre-Shot system is for players of all abilities. It will help them radically improve their game and increase their success and enjoyment on the course.

Jon Finn has developed Pre-Shot during a decade of teaching and coaching.

It consists of easy-to-understand golf-related exercises which tap into the latest neuroscience and understanding of which parts of the human brain are used by golfers.

The effectiveness of the Pre-Shot training programme has been proven with players of all standards; from high handicappers to European tour players.

Do pre-shot routines work in a round of golf?

Did Mickelson learn to control his monkey brain on British soil?