The superlatives I could use for Lumine Golf Club are never ending. Perfect for golfers, perfect for families, perfect for everyone really, I honestly couldn’t give you one thing I would have changed during my trip, it was that impressive.

Located 20 minutes from Reus airport in Costa Daurada on Spain’s North East coast and about an hour away from Barcelona, the resort is combined with and situated within the same grounds as Port Aventura, Spain’s first theme park which also features a water park, four themed 4-star hotels with a total of over 2,000 rooms, and a 4,000-capacity convention centre.

My stay was in the Hotel Port Aventura which was awash with colour and had a lively buzz to it which would be perfect for families and couples alike. The hotel has two large pools, five restaurants on-site, large spacious rooms with wi-fi and the Wellness Centre where you can unwind after a day at the theme park or on the golf course in the steam room, sauna and jaquzzi.

There are also options for a stay within Lumine’s six neighbourhoods each with its own personality with multi-family dwellings, semi-detached houses and detached houses to choose from. Each option will provide you with space, freedom and peace to allow you to enjoy your stay in luxury.

The tranquility of the resort continues as you can drive about without the busy traffic jams of the nearby tourist traps to the Beach Club and the golf courses. 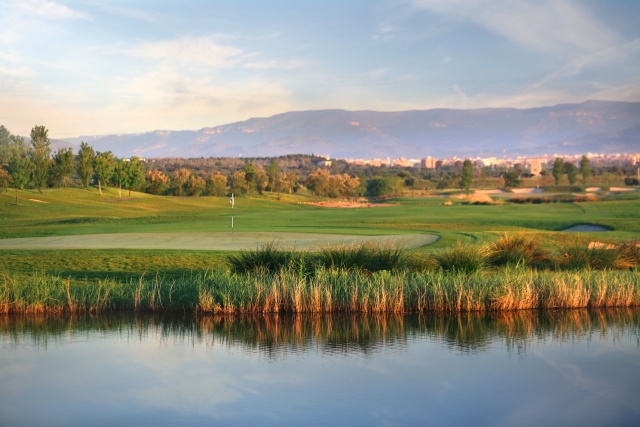 They say Lumine is a golfer’s paradise and I would not argue with that. You look out over the 170 hectares and you see plush green, whether it be into the hills or looking out towards the sea through the picturesque pine groves or ancient ruins. 45-holes span this great expanse of land with a lot more area to build on. The Troon managed resort has two 18-hole courses; the Lakes and the Hills each with their own clubhouse and you even have the fantastic 9-hole course -  the Ruins to enjoy during your stay.

A more detailed review of the Lakes, Hills and Ruins course can all be found on Golfshake but the resort itself houses everything you would want for an away trip to a golf resort. Both the Lakes and Hills feature their own grass driving range and specialised short game area along with putting green and I can assure you that the conditions on the putting green are the same out on the course – like lightening.

The Lakes and Ruins are designed by Greg Norman and along with Hills course the resort is home to the Nordea Tour Winter Series. 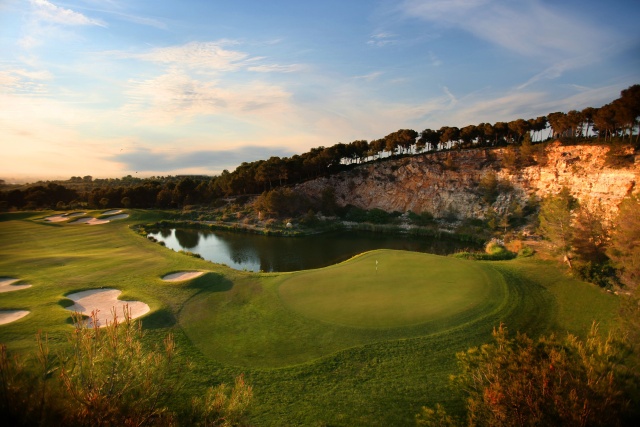 All of the courses have won the Audubon International Golf Signature Sanctuary Certificate which recognises Lumine as being environmentally stable meaning designers had to follow the blueprint when plotting their way around the Sequia wetlands area on the Lakes and the quarries, pine groves and archeological ruins on the Hills and Ruins courses.

As aforementioned both the Lakes and Hills host their own unique and fantastic clubhouses with and expansive veranda on the Lakes where you can relax watching the 9th and 18th greens and the fabulous balcony that overlooks the 18th green on the Hills which is built next to an ancient ruin. Enjoy a pre round coffee or a much deserved post round beverage along with bar snacks and an ever expanding food menu. A pro shop and reception is also featured within both clubhouses for you to purchase Lumine memorabilia or enquire about another round which you’ll want to do immediately.

Club hire is also available at 60 Euros a week for which you’ll use the latest in TaylorMade technology including the new SpeedBlade irons tailored to your needs.

Head Professional is Englishman Andy Gordon who has been in the post for two years and made an instant impact when he first arrived by opening the Lumine Performance Centre. You’ll find all of the latest technology in there and it’s where Andy conducts his teaching of pros and amateurs of all ages along with his features for Today’s Golfer Magazine. You can also have remote coaching in the form of video analysis for which he runs his professional eye over and adds in his voice over for easy learning. This feature can be downloaded to iOS or Android devices and used on the range for you to work on certain drills or swing changes recommended. Andy has also wrote and built his own putting games to help knock off those all-important strokes on the greens.

The facilities are that good International teams use Lumine as a training base in the winter – Denmark, Sweden, Austria, Poland, and Netherlands have all trained there as well as some promising young professionals under Andy’s watchful eye.

The club itself has only 200 members of which to my surprise only six or seven are English ex-pats; the vibe in and around the resort is just of pure relaxation. The dynamics of the current surroundings could all change very soon with Barcelona World in the pipe line to be built on the huge expanse of land owned by Lumine. The Crown Casinos and hotel development is due for completion in 2016 at a cost of 1.1billion Euros. Add that to Ferrari World as well, similar to the one in Abu Dhabi, and the landscape could all change in the next few years but I think for the better. More money means more development and investment into the golf itself as adding on more holes have not been ruled out.

There was no better way to relax before and even more so after a round of golf than at the Beach Club. This tranquil spot is perfect to unwind and the peaceful surroundings and great views of the Mediterranean Sea make it almost seem not real. Four infinity pools have been built to make it feel like you’re bathing in the sea and if you actually want to go in the sea it’s less than a two minute walk to the bottom of the hill and onto the sand. If you’re staying at Lumine or have a tee time booked then access to the Beach Club is included. Towels are provided on arrival so all you have to do is sit back and relax.

The Lumine Restaurant is located on-site at the Beach Club and it’s where you can enjoy an evening beside the sea tasting its delicious Mediterranean cuisine.

Known as the ‘Golden Coast’ Costa Daurada is one of the main tourist destinations in Spain and located on the southern tip of Cataluyna. I’d recommend hiring a car as away from the golf and theme parks its expansive coastline which expands 81 Kilometres as far as Girona to the north east can be explored as well as historical villages, medieval monasteries and vineyards. The Roman Monuments of Tarragona, the region’s capital, is an official UNESCO World Heritage Site.

The region has 12 golf courses designed by some of the game’s biggest names. Adding onto Norman at Lumine are Bernhard Langer and Robert Trent Jones Jr who all have courses in the area. Golfers will flock to Catalunya for its typical Mediterranean climate with warm summer, mild winters and low rainfall.

Would I return to Costa Daurada and Lumine? Yes, in a heartbeat. The area has everything you would want from a holiday and golfing perspective. A perfect golf resort with top notch courses in a region that has Spanish charm and warmth.

Staying in the Hotel Port Aventura was great fun and the theme park has something about it that you couldn’t help walk around with a smile on your face. Perfect for adults and children alike it has something for everyone.

I found the area to be cost effective as well and the fact it was only a short plane ride away made it even better.

A last word and a very special mention to all the staff at Hotel Port Aventura and Lumine Beach and Golf resort. Your polite, smiley, fun and charismatic demeanor were a joy and you’re a credit to your employers so thank you.

Lumine rated and review on Golfshake