West Hill Golf Club is unquestionably one of the finest tracks in Surrey. It frequently ranks as one of the top 100 golf courses in the UK, and is located in an area of the country that is well populated with top-quality heathland courses. The likes of Woking, Worplesdon and Hankley Common are all situated in a county that possesses more than its fair share of championship-standard courses, and it’s testament to the quality of West Hill that it’s widely regarded as one of Surrey’s finest venues.

The golf course presents an eclectic mix of golf holes that all combine to present a wonderfully testing yet innately fair golf course. West Hill isn’t long by modern standards, but there is a diverse array of obstacles to overcome. Heather comes into play on most holes, placing a premium on driving accuracy. Golf is a game of small margins, and the difference between a good shot and bad shot at West Hill often boils down to a matter of feet.  Several drives are hit over hillcrests, and a number of fairways are lined with heather. As such, you often think you’ve hit a good drive, only to find that it’s trundled into trouble. The heather, though, is fair. Whilst it relatively penal, you are able to advance the ball 100 yards or so down the fairway.

West Hill is a golf course made for good drivers, and those that can manoeuvre their golf ball off the tee. The course isn’t overly long, but batches of heather, mature trees and strategically placed fairway bunkers demand accuracy from the tee. A number of ditches of and grassland ridges also make you think twice about hitting driver. If you can put the ball in play from the tee, however, there are opportunities to attack. The greens, in general, are relatively large and subtly undulating, but are presented in perfect condition. If you get the ball rolling on the right line at the right pace, you won’t find any scuff marks or bobbles stopping it from falling into the hole. 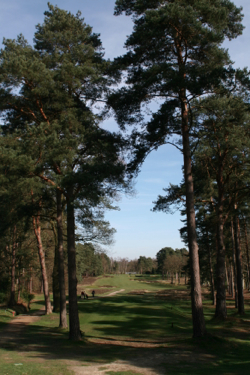 The golf course starts with three tough par fours. At the first, drives are hit at a slight right-to-left angle to a fairway that sits below the level of the tee. A ditch lies in wait some 250 yards from the tee, and most players will have to use a three wood in summer or risk running out of fairway. That isn’t the only hazard, though. Some of the thickest heather on the course populates the left side of the fairway, and you’ll be blocked out with your second if you leak you tee shot too far right.

The second is a mid-length, heather-strewn uphill par-4 with a long, thin green, and is followed by one of the toughest holes on the course. At 470 yards, the third requires a long tee shot if you’ve got aspirations of reaching the green in two. To add to the difficulty, trees run parallel to the railway track down the left side of the fairway, meaning anything slightly pulled will invariably result in a lost ball.  From the fairway, a wood or long iron remains to a small green that’s positioned slightly below the level of the fairway. To things more challenging, a man-made ditch traverses the fairway 20 yards shots of the green and runs left of the green, catching any pulled approach.

The first, and arguably best, par 5 on the course is the fifth hole. The drive plays significantly uphill, and if you find the plateau of the hill, you’ll be left with 250 yards to the green. The second shot is all about placement, as heather crosses the fairway and runs down the left side of the hole. Your third should ideally be played from the left of the fairway to open up a green that’s well protected by sand.

The back nine, in a parallel to the front side, starts with three par 4s, culminating in the risk/reward 12th. At 270 yards, it is driveable for the longest hitters. That being said, taking an iron is probably the shrewd play as trouble lurks everywhere. Anything pulled slightly left will end up in dense shrubbery, and bunkers placed some 40 yards short of the green should be avoided at all costs.

The 13th - the first par 3 on the back nine and third overall - is probably the best short hole on the course. It only requires a short iron, but the putting surface is surrounded by some of the most severe bunkers at West Hill. Only a pure strike will find the target, and distance control is key as the narrow green is some 80 feet from front to back. It’s a great par 3, and proves that a short hole with character is far superior to a long, nondescript equivalent.

The closing stretch at West Hill is comprised of some really good holes – the par-5 17th, with a patch of gorse some 100 yards deep in the middle of the fairway, being one of them – but the 18th is arguably the best hole on the entire course. The fairway is very generous on this uphill par-4, but the second shot is where the real difficulty lies. The clubhouse sits just five meters behind the green, and there is no room for a bail out. Trees line the left side of the fairway up to the green, and a collection of humps, heather-strewn hollows and bunkers lurk short and right of the green. If you find a one of these traps and catch your next shot slightly thin, you could have a substantial bill on your hands!

West Hill is a terrific golf course, with a selection of fantastic holes and numerous obstacles that make course management and accurate hitting the order of the day. It’s a great heathland track with an excellent variety of testing holes, set in a beautiful part of the country.

10 Most Improved Golf Courses in The Midlands in 2020