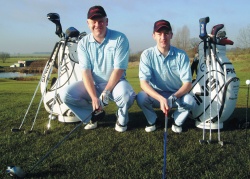 One Northamptonshire club has a trick or two up its sleeve in the drive to encourage more people to Get into golf.

Cold Ashby Golf Club, near Northampton, is hoping to hit all the right notes as part of Midlands Golf Week.

The club’s PGA professionals – Shane Rose and John Chivers – will be offering a golf day with a difference as part of a wide range of activities to make it easier than ever for people to give the sport a go.

The pair will be delivering a special musical golf show as part of the free taster sessions at the club on Sun April 14th with the show taking place from 11am with a golf instruction clinic from 12 noon and four-hole challenge at 1pm.  The second event will take place on Weds April 17th at 6pm with coaching from 7pm.

Explains head professional Shane Rose: “The musical golf show is something we first did to mark the opening of the club’s driving range and since then we have delivered it at events up and down the country.

“Put simply, we hit trick shots to match the music – so, for example, ‘Swing low, sweet chariot’ will see us shaping special low shots. The show lasts for about 40 minutes, during which time we hit about 300 balls. We have added new trick shots over the years, songs which we can fit a shot to or a theme, such as dressing as Laurel and Hardy to perform the show.

It is the first time that clubs from Northamptonshire have supported Midlands Golf Week, which is held across eight counties from April 12-21.  More than 4,750 would-be golfers have seized the opportunity to give the sport a go during the first two years of the week-long festival of golf.

Clubs from Northamptonshire will join those in Shropshire, Herefordshire, Leicestershire, Worcestershire, Warwickshire, Staffordshire and Rutland by putting golf at the heart of the local community.

As well as the Golf Mania days, Cold Ashby will be offering a free nine holes of golf throughout Midlands Golf Week for anyone playing with a member or £10 for those playing alongside a visiting golfer.

Adds Shane Rose: “We will be relaxing rules such as dress code and bag sharing for the week which we hope will make golf even more accessible. While we support the traditions and standards of the sport in areas like rules and dress codes, we also don’t want golf clubs to be off-putting for newcomers.

“We will be offering follow-on coaching for those who are interested and creating a pathway towards potential club membership in the future. For example, our ladies coffee mornings have proved very popular for those wanting to build their confidence in their own game before becoming members of the club.”

Says David Davis, county development officer for the Northamptonshire County Golf Partnership: "It is great to see clubs coming up with different and innovative ways to appeal to a new audience of potential players.

"It is thanks to the clubs throwing open their facilities to would-be golfers that Midlands Golf Week has proved such a success and we are delighted to be part of the campaign for 2013.