Sitting in one of the most beautiful coastlines in the World, the Spanish region of Murcia is a haven for golfers.

With 300 days of the year in sunshine and some of Spain’s best golf courses all within 20 minutes of each other, it is no wonder that you can find some of the best golfing breaks to this fantastic area.

Add that to the fact that you have two airports nearby (Murcia and Alicante) that most of the low cost airlines fly too, a range of accommodation and resorts to suit everyone and then put that with some of the world’s famous golfers associating their name with courses they have designed.

Some of the golfing resorts include La Manga, La Torre and Las Lomas to name a few.

I stopped at the fabulous La Manga Club that is set in 1400 acres of land over two resorts and has virtually every sports and activity under the sun. The room is self-catering but the site has over 20 restaurants and bars for you to indulge in whatever you like.

A standard twin room is very spacious and the view over the Mediterranean is fantastic to wake up to before your early tee off.

I cannot rate the La Manga club any higher, it has something for everyone, if you come in a golfing group or as a family it will accommodate.  I stopped in the Principe Felipe hotel but there is also the Las Lomas village & spa located on the same resort and you can use all the facilities at either place. 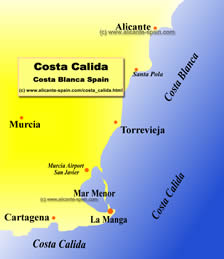 You are situated right on the coast and you can easily walk into the nearby village by I can honestly say you won’t want to.

The La Manga resort has enough for your stay. If you are staying for a week then maybe you will but my three night stop was enough and I still didn’t see all the resort.

The area of the Mar Menor ( little sea ) is almost totally separated from the Mediteranean Sea due to the "La Manga del Mar Menor" which means "the sleeve of the little sea".

The actual entrance of the Manga strip starts at the lighthouse called Cabo de Palos. From here you drive up the whole strip, which made me feel a bit like being on the Torrevieja or Benidorm beaches. However, there are lots of sandy beaches having spots for relax on both sides of the road.

Close to the end of the La Manga, which ends at the village of Veneziola, you will find the beautiful yacht club called "Tomas Maestre" right at the other lighthouse at the Punta del Cocedo. I went there and had a nice beer at one of the many restaurants looking out over the Mar Menor.

Around the entire Mar Menor area you will find lots of beaches and villages to explore. From famous beach spots like the Playa Honda close to La Manga to the Playa de los Nietos or the Playa de Palo close to San Javier.

La Manga itself has three championship courses. The North course which is ideal for mid-high handicappers with quite tight fairways and large undulating greens.

The newer West course is a tight woodland style course where accuracy is everything where plenty of water hazards await along with some stunning views of the surrounding area.

And last but certainly not least the South course which is the most famous of the three having hosted Spanish Open’s in the past. The demanding 18 holes really put’s your game to the test with water, well placed bunkers and tricky greens waiting to wreck your scorecard. 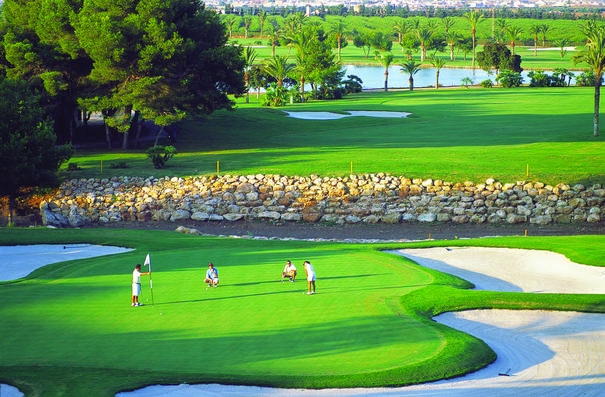 If you rent a car then there is a lot to go and see up and down the coast. With the La Manga situated on the southern tip you will want to head north back towards the Airport.

From a tourist point of view, Spain and Murcia itself offer you a huge amount of interesting places to visit as the history of the city goes back to the years 800 where it was originally founded as part of Cordoba. Certainly amongst the famous visiting points for any traveler is the Cathedral de Santa Maria.

Finished in the 15th century the cathedral is the most impressive monument of Murcia. The city is divided by the Segura River and is known for its beautiful Baroque Cathedral, Almudi Palace and the castle of Monteagudo ( where the Arab influence can be well appreciated ), a fortress from the 11th c., the Market de Veronicas, the Malecon Garden, the University of Murcia and the Museum Ramon Gaya. The Museum Ramon Gaya, dedicated to the artist with this same name and native of Murcia, is found in Casa Palarea in the Catalina Square.

FACT: The La Manga Club is that big you can fit Monaco inside it.
FACT: La Manga has been voted the best golf resort three time out of the last four years.

Murcia Airport is 20 minutes away from La Manga or Alicante is another 25 minutes added on top of that.
Easy Jet, Ryan Air, BMI baby and many of the tour operators fly into either of these airports.

You can get a bus transfer to the resorts but to save hassle I got in a taxi which came about 32 Euro’s.
Surrounding Area

Head north up the coast and go inland and you will find the La Torre Golf resort and Apartment. Another fabulous golfing resort with Jack Nicklaus bearing his name on the main golf course.

The area is truly a wash with golf resorts and fantastic courses and I would recommend you book your break straight away.