Hillside Golf Club was first established in 1911, but significantly revamped by Fred Hawtree in the 60s. It has staged many top amateur and professional tournaments and had been on my bucket list for some time.

This special venue is part of an area known as England’s Golf Coast and I can see why. It's easy to reach by train or car, with excellent accommodation and eateries, making it a wonderful destination for a golf staycation in England. Hillside has a reputation as a first-class championship links. It is located tightly between Royal Birkdale to the north and Southport and Ainsdale to the south. Is there a finer golfing sandwich anywhere in the British Isles? 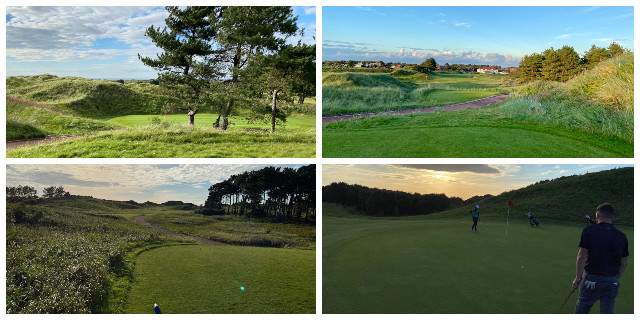 I have been reading Harry Foster's excellent book, Links Along the Line, detailing the growth of this region of golf heaven that developed directly as a result of the rail links and housing developments near to Liverpool. The land between the sea and the agricultural ground was so undulating and housed some inhospitable grasses and foliage that it couldn’t be used for anything but golf. As the popularity of the sport grew the area became a mecca for golfers.

As part of my preparation I watched reruns of the 2019 British Masters Hosted by Tommy Fleetwood. From the back tees it plays 7,078 yards, dropping to 6,160 yards from the yellows. The course is routed in two returning loops of nine. The front side runs basically paralleling the railway line that slices between Hillside and Southport and Ainsdale until it reaches the fifth green at a boundary of the course. It then routes back to the clubhouse.

This is a layout that could be described as out and back There are few signs indicating to the visiting golfer the routes between green to the next tee. These are not needed as closely cut and immaculately manicured paths show the way. It illustrates the quality of the conditioning that I have played on greens that were in a worse condition than these walkways.

I thoroughly enjoyed the subtleties that were present wihin the opening nine. There are some very cleverly sighted greens with challenging but appropriate greenside bunkers. There is a planned programme of work to produce a phased series of enhancements to Martin Ebert’s design.

As we were playing with a Ladies European Tour player, Holly Calvert, we decided to play from the black competition tees. Her opening drive was a stunner. I was intimidated by the opening hole. Everything left is OOB and this includes an active train line as well. Bail out right and a string of well-placed bunkers are immediately in play for all standards of golfer.

I particularly enjoyed the 2nd, 3rd, 6th and 9th. The train track that runs the left side of the first two holes is close enough to make its presence felt on the tee both visually and practically. The stark, straight lines of the train track and its protective fencing juxtapose beautifully with the slopes and contours of the ground and fairways. The burn that runs through the third hole is cleverly adapted into the design. The turf and surrounds to the hazards on this hole are immaculately cut increasing the footprint of each hazard substantially. The undulations only become fully apparent once the shot has been played and the ball is tracking directly to one of them.

There has been some considerable work done on the 4th which is bedding in superbly. I will be monitoring the drone footage of these works with interest as the changes have been substantial. I parred the 5th, but it required three career best shots and a couple of putts to complete. The narrow ribbon of fairway is framed by some incredible dunes and rough. The fairway has changes in lies throughout its length that ends with a kidney bean shaped green guarded by bunkers front right and left. I genuinely floated off this green, grinning stupidly.

The 7th is a stunning short hole framed to its rear by enormous pine trees. We were blessed with beautiful sunlight during our visit and the shadows across the green from the tee created a wow moment for us all. This was the first of many.

The back nine at Hillside has a tremendous reputation to live up to given reviews from some of golf's legends. Jack Nicklaus was very complimentary stating that the course is; “A wild looking links; within the second nine are some of my favourite holes”. Greg Norman describe dthe back nine simply in a note to the club as the "Best in Britain."

There are times on a golf course when the weather, playing partners and your game match and everything becomes easy. It can border on a religious experience such is the power of golf on a good day in perfect conditions. This back nine felt sublime. We turned to the 10th tee towards an elevated green that was framed by trees and an incredible landscape of hills and swales. The sun was dropping behind the green and we all independently just said; “wow."

The bunkering is intimidating with a pot short that has the effect of foreshortening the length required to reach the green. We all double checked our distance devices such is the slope to the front of the green. The pin was tucked to the far left. The quality of this hole brought out the best in all of us and we all recorded a par.

The 11th is a ribbon fairway that dog-legs right to left with a string of bunkers supporting the narrow first cut. The fairway was dappled with shadows and the undulating fairways were highlighted beautifully. Holly struck a great tee shot drawing to follow the shape of the hole. At the 250-yard mark she hit a seagull that was around 20 feet from the floor. It flapped and fluttered until it hit the ground where it remained motionless and immobile. Literally taken out of the sky. She was visibly upset as we all thought the bird had expired. As we got 40 yards away it shook its head and then flew off in a display of defiance. It was at this point that I realised how good you have to be to be a professional player.

I can remember every step and shot I took on this hole. It is an absolute gem.

Unusually for a links there is a lake water hazard in play at the elbow of the dog-leg for the next hole. It is just visible from the tee. At the 12th, the diagonal placing of the tee boxes give a range of options for all standards of golfer. Each being required to place a tee shot in the widest part of the fairway. The green is protected by off-set bunkers.

The four consecutive par 4s between the 12th and 15th are all interesting with a cunning putting surface at the turning 12th, an elevated crested green at the next, then a plunging drive on the 14th with a fairway that is framed and moulded between dunes of epic proportions. The 15th fairway provides a sharp dog-leg requiring a shaped draw to avoid bunkers placed at its elbow. This is a distractingly beautiful golf hole that requires a careful and competent strategy for success.

The 16th is a brute of a par-three, played to a massive two-tiered green that is framed and defined by pine trees and hollows that draw the eye and cause visual confusion as to distance. A beautifully simple short hole.

The 17th looks stunning off the tee as the straight hole wends its way back towards the gorgeous looking clubhouse that can be seen on the horizon. I couldn’t help take at peak at Royal Birkdale. The elevation of the tee together with the fairway undulations in the fading afternoon sunlight causing shadows to give the fairway the effect of furrowed bed.

We played in balmy, still conditions. I can only imagine finishing a round into the wind on these holes. What a sublime challenge. I used every club in my bag during the round to mixed effect but appreciate that this is a great test of golf. The final hole is another visual beauty with sand scrapes and bunkers a plenty when viewed from the tee. Heading home to the welcoming, friendly clubhouse came about much too quickly.

This was one of the most thrilling rounds of golf I had played all year despite not scoring well. It was a simple, joyous pleasure to be here and enjoying this awesome links with some great golfers and witnessing them playing to their best. We adjourned to the patio and drank and chatted until it was almost dark. This is a special place and it was a real privilege to be able to enjoy it. 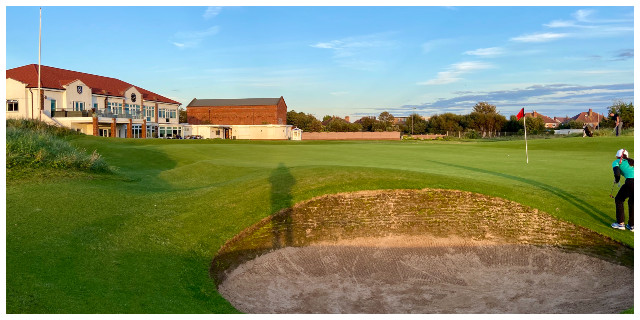 The terrain on which this club is based is superb. The turf is tight but fair. The extensive swoops, humps and hollows with a plethora of bunkers ensure you are playing three-dimensional chess as you attempt to plot your way around the links. The back nine is as good as I anticipated following my pre-round research. If Greg Norman describes it as the best back nine in Britain then you have to take notice. Hillside is simply superb.