Hill Barn Golf Club is a downland course which bills itself as “Worthing’s finest golf club”. Golfers familiar with the ‘other’ “Worthing’s finest golf club”, the considerably more upmarket Worthing GC, may take issue with this claim, but a quick sweep of Hill Barn’s website and history suggests that this is nevertheless an excellent course. It is over 75 years old and was designed by the same man who designed Royal Birkdale, Fred Hawtree, so it has plenty of pedigree, which is also evident in the number of professional tournaments it has hosted over the years, playing host to players like Peter Alliss and Tony Jacklin. From the club literature alone, then, this should be an outstanding test. But will it live up to expectations?

Arriving at Hill Barn isn’t the event that it is at more moneyed clubs, but it’s a pleasant enough experience. The course is tucked away directly behind Worthing GC, and near a local college. Not Magnolia Lane, but not a Thatcher-wrecked council estate either. On arrival, me and my playing partner were greeted by a steward who was checking everyone’s tee times instead of the closed pro shop. Despite the rather ominous look generated by a Covid-19 face mask, he was a very friendly chap and before long we were checking up chips on Hill Barn’s small but well-formed chipping green and getting in some practice putts on the putting green. For players wanting a more thorough warm up there is a full practice ground, but it’s a bit of a trek from the clubhouse and you’re probably better off just wacking a few five irons in the nets (two are stationed just beside the chipping green) and taking your chances. The first hole is quite benign so you can afford to warm up during rather than before your round. The clubhouse was sadly but understandably shut due to coronavirus (though you could use the toilets).

So what of the course? Well, beginning with a rather bland, 320-odd-yard par four, Hill Barn starts slow. However, the second hole is a much better test. This is a 440-yard monster that requires you to thread your drive over and across a hill and then down to a small green guarded by a bunker. As you get nearer the putting surface, the fairway tapers in and becomes flanked by wads of trees, so accuracy as well as length is tested here, which makes a refreshing change from one-dimensional ‘bombers’ tracks. You can’t just crash driver willy nilly – Hill Barn requires golfing nouse too to score well.

After a flurry of steady but unspectacular par fours, you then find yourself confronted with the fifth hole. On paper, this looks benign. It’s short – barely 120 yards even from the tips – and ostensibly straightforward so that when I saw it on the scorecard I was licking my chops. But underestimating this short hole is a mistake. The green is small and instead of a fringe has two hulking bunkers which are concealed from the tee. Meanwhile, there’s the flag – which itself is only just visible – throwing a spanner in the works of alignment and the elevation changes make judging distance tricky too. The result is that despite its short yardage this hole is easily capable of becoming a card-wrecker. A panoramic view of Worthing (the city, not the golf club) and the sea beyond means that this hole has beauty as well as brains and five holes in it looks like Worthing GC ought to be watching its back…

The next hole that really stood out for me on the front nine was another shortie. The par four eighth measures just 250 yards, with the green reachable for most players with only a wood. The green is pitched on a hill like an upturned policeman’s helmet, which means that if you choose to take a pop it, there’s a very real risk of trickling off one of the sides and being left with a tricky up and down. Obviously, a wild tee shot is also no good, because there is cabbage up the left and on the right. You need to be accurate, even if you’re just laying up. Cautious players can lead off with an iron for a simple approach shot, although two large fairway bunkers mean that even on the fairway there is danger for anything other than a perfectly threaded strike. As with the fifth hole – its spiritual twin – brains and brawn is the ticket to a good score.

I wasn’t so keen on the ninth. First, because it’s a bit bland. Second, because I bogied it.

In terms of condition, the front nine was overall in quite good nick, especially when you consider that the course had only just reopened after lockdown and so wouldn’t have had the same level of maintenance that you would usually expect for this time of the year. The greens were a little woolly, but again, this was probably down to restrictions rather than tardiness and the fairways were nicely cropped and good to hit from. However, me and my playing partner did have some difficulties with the bunkers. In some, the sand was deep and claggy, reminiscent of a child’s play-pit, whereas in others, there was barely any sand at all. The result was that it was very difficult to judge recovery shots, although I suppose it could be argued that since bunkers are meant to be a hazard, this isn’t really too damaging.

Onto the back nine, which, like the front side endures a slow start. This comes in the form of the so-so tenth hole. But when you turn to the eleventh, you really understand why this course has hosted major professional events – albeit quite some time ago – and has been around for as long as it has. Hill Barn’s par threes are probably its strongest holes, and the eleventh continues the tradition. Yardage is 175 yards, give or take. You’re hitting in with a longish iron, then, unless you’re really massive, and this means that the raised green, propped up on a really very steep hill, is tough to hold. As if that wasn’t enough, there are bunkers, lots of bunkers. I didn’t count but there can’t have been less than seven massive traps huddled around the front of this green. A short shot, therefore, is absolutely stuffed. You have to carry your approach all the way and then stop it on a sixpence. And that’s not even mentioning the likely crosswind. What a brute!

Thirteen, a long par four which again requires you to hit up a steep hill for your approach, also got the pulse racing, before we came to the fourteenth, which is a dogleg left across a slope. As you’ve no doubt guessed Hill Barn (the clue is in the name) has no shortage of hills and contours and the holes make great use of these to keep things interesting and make even quite straight-forward-looking holes on the scorecard play with more than a hint of fang in real life.

That said, there is a downside to having so many hills…. Sometimes, you have to go up them. It’s inevitable. Most of the time, these inclines aren’t too punishing, but the trek between the fourteenth green and the fifteenth green will push especially elderly players close to breaking point. I have trotted through mountainous Australian national parks and tackled overhanging routes at my local climbing gym and found this genuinely exhausting to get up. It’s 500 yards or so pretty much straight a very steep hill. And either because of an oversight or Covid-19, there were no water fountains, so unless you pack your own (neither me or my partner were this organised) you’re going to be tackling the climb without refreshments. NOTE TO UNFIT OR ELDERLY PLAYERS: book a buggy!

Once you’re knackered from the climb up 15, you face three difficult(ish) holes to finish. A long par four, 15 itself is no pushover, but 16 is tougher, because it requires a tight drive and is also over 450 yards long. The course’s final par three lives up to the quality of its predecessors. 220 yards separate you from a contoured and bunkered green, with a steep drop-off stage left. Finally, 18 is a par five which sees you drive into a valley and around a corner. I thought this was a strong finishing hole. It’s not particularly long – maybe 520 yards – but in typical Hill Barn fashion, there are hidden depths in the form of a cluster of fairway bunkers around the ideal landing area for your second shot. Again, you can’t just smash and blast aimlessly: you have to plot your way around.

Greens felt longer on the front nine than the back nine, and seemed slower too, but were perfectly true-running. Bunkers, oddly, felt more consistent.

Unfortunately, due to Covid-19, the clubhouse was, as I’ve mentioned, mostly shut, so the usual post-match drinks had to take place at a local Esso rather than at Hill Barn. From this distance however, I will say that the clubhouse looks nice enough and seemed to be well-stoked with all the usual amenities. One last look around the practice ground before I left confirmed two solid putting and chipping greens, and a decent, if slightly distant practice range. Perfectly respectable, if not quite up to the level of Hill Barn’s sister club Chichester (for a full review of that club, click here).

So the assumptions I made at the start of this review proved true: Hill Barn is an excellent test of golf, marked by great views and challenging slopes. Among a lot of bland parkland tracks – that seem to be unusually populous in Sussex, for some reason – this course stands out for its refusal to yield to crude ‘bomb and gouge’ tactics. It’s a real test of strategy as well as fine marksmanship. Practice facilities are good, not amazing but perfectly serviceable. Condition could have been better, but again, there’s a get-out in the form of coronavirus. Whether it’s truly “Worthing’s finest golf club” or not, Hill Barn is undeniably a top test of downland golf. 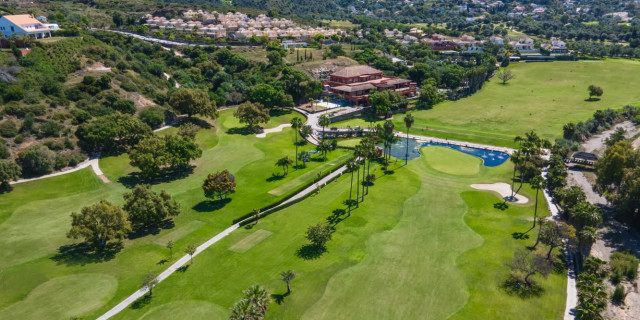