The Hunting Course at Slaley Hall is a must play if you happen to find yourself golfing in the North East of England, or even better staying in the onsite hotel. Unlike some resort courses, Slaley Hall’s Hunting Course has character and offers a large variety of holes to test all parts of your game.

For those who enjoy plotting their way around a golf course, then the Hunting Course at Slaley Hall is definitely the course for you. The first three holes on this course are a prime example of this as you will need to take a long iron or fairway wood off the tee to avoid hitting your ball in any trouble.

The course also features many strategically placed bunkers that make you think just that little bit more as you stand over the ball. All of these bunkers are reasonably large, which adds to the challenge of avoiding both the fairway and greenside bunkers. 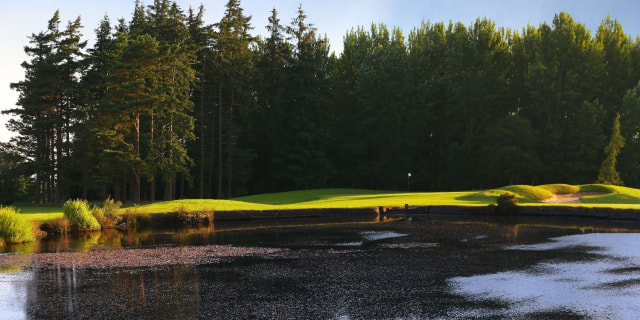 The key feature that separated this course from other resort courses were the greens. Although most were fairly large, they possessed major undulations and with many of the pins on slopes, it was hard to find yourself with a straight putt. On top of the undulations, the greens were very fast and ran true, which is everything you could ask for from a putting surface. It is clear to see from the tree-lined fairways and undulating fast green why this course is known as the “Augusta of the North.”

As I mentioned earlier, the front nine is very much about tactics rather than smashing driver everywhere. The 1st hole is exactly that as the first tee shot is a dogleg left. Three bunkers and long grass down the right hand side and a large bunker on the left hand side of the fairway make this drive a tough one. The par 4 is 442 yards but if you want to leave a short second shot you have to be brave enough to take on the corner.

The 2nd hole again requires an iron off the tee as it is a 90 degree dogleg right. There is no option to cut the corner as large trees block your drive but your iron shot must be accurate as there is a stream that runs along the right and bunkers guarding any shot bailed out left. On top of this your shot has to be long enough to reach the corner. It doesn’t end there, the green is surrounded by bunkers as well as possessing many slopes to try and move your ball off the green.

The 3rd hole again gets you thinking on the tee as the further you get the ball off the tee, the tighter the fairway gets. The second shot is reminiscent of the sort of tree-lined holes you see at Augusta as you attempt to funnel the ball through the gap and find the green. If you get out of the first three holes level par you should be proud of yourself. 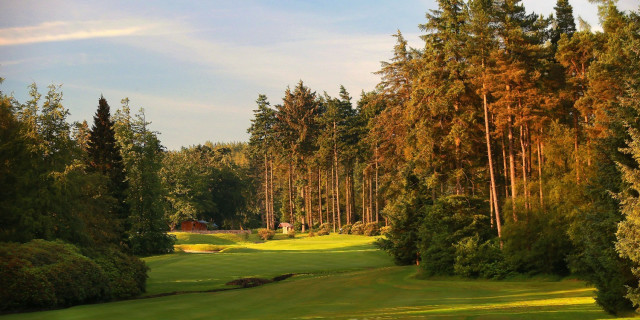 The 4th really showcases the strength of the defence the greens on the Hunting Course posses. Despite being a relatively straightforward downhill par 5, the green features several slopes and if the pin is back left, on a knuckle like it was when I played, you have to make sure you put yourself the correct side of the hole.

The 5th is another risk and reward hole for the long hitters among us. If you take driver you have to be accurate enough to hit the fairway that gets narrower the nearer to the green you get and you must avoid the pond that awaits any ball hit slightly left. You must then avoid the water on the left hand side with your approach shot to this two-tiered green.

The first par 3 on the course comes at the 6th hole and is fairly long one over water. The hole plays tough when the pin is back right and as it is a large green, you need more club and have to play a slight fade in order to make the most of the undulations. A par is a great score on the 200+ yard par 3.

Holes 7 and 8 are both par 4s and again keep the golfer thinking whether it be on the tee or on the green. On the 7th, you make your way up the hill to one of the most impressive greens on the course. The huge undulations will make you feel like you’re playing in the Masters and will require some intense green reading in order to work out the slopes. The 8th hole especially requires a tactful approach because a driver off the tee will see you end up in a small stream that separates the two-part fairway. This then leaves a relatively long iron shot to a well-guarded green.

The signature hole is without a doubt the par-4 9th hole. You drive through an avenue of trees but must make sure you are short of the burn. This hole looks beautiful in summer as the rhododendrons that guard the left side of the hole are in bloom. The approach is uphill towards the clubhouse and will require an extra club to get the ball up there.

The first three holes on the back nine are the only real opportunity you get to open up the shoulders with the driver and let the ball fly as the course begins to open up a bit. The 10th hole is pretty straightforward but you must make sure you get the correct distance with the approach. From where you play your second shot, it almost looks like the green is a bowl shape however it is not, so do not expect your ball to release on the green, a mistake I made while playing this hole. 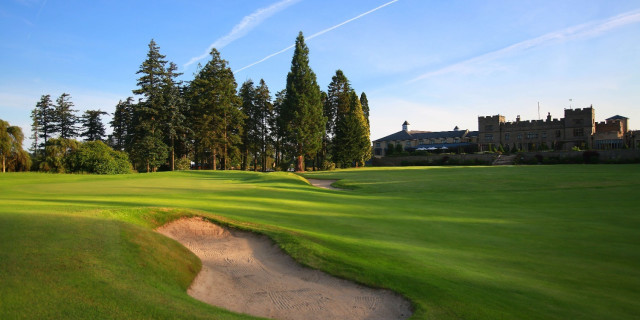 Next up is back-to-back par-5s in 11 and 12 where you can really test your driver as both holes run side by side. There is a huge bailout are left making it almost impossible to lose your ball but if you don’t find the fairway, you will find it tough to reach in two as both are over 500 yards. The greens on both these holes are the biggest test, especially the 11th where there is two tiers and several steep slopes.

The 13th is a beautiful looking hole and requires an iron off the tee in order to miss the pond that divides the hole. The second shot is then played up the hill, into a wooded area and really is one of the best looking holes on the course.

The penultimate par-3 comes at the 14th and measures at 176 yards. Again, this is another good-looking hole and if you have ever played the 10th hole at Hillside Golf Club, it will bring back memories of that. The majority of the green is blind and you must make sure you hit enough club in order to make the green and clear the bunker that guards the front of it.

You cannot afford to rest on your laurels around the Hunting Course at Slaley Hall. If you’ve taken advantage of the two par 5s on the back nine and have a good score going stood on the 15th tee, you must make sure you keep your concentration and play for par.

The 15th tee shot is blind and it plays a slight dogleg left. An iron off the tee is suggested as it is only short hole at 326 yards and a driver off the tee can find itself in a lot of trouble if not straight. The approach shot is also blind and if the pin is tucked to the left hand side, you’re better off hitting the middle of the green and two putting for par. The bunker on the left side is a no go as you have to play onto the downhill slope of the green and it is hard to stop the ball if the pin is tucked away on the left.

The 16th again is another tough hole on the final stretch. The 386-yard par 4 is a dogleg left but requires an iron off the tee for accuracy. Three bunkers along the right can actually help golfers out who play a slice as they catch anything heading for the out of bounds just beyond them. For big hitters, a driver is arguably too much to ask, as you must hit the perfect draw around the corner. Although this leaves a much longer approach shot, the green is relatively large and doesn’t feature as many undulations as previous holes.

The 17th hole, and the final par-3, is a very tough par 3 indeed. The hole plays 180-yards, slightly uphill and has a majorly undulating green. There is a large bunker that covers the front and right hand side of the green meaning it makes it tough to run the ball in. Nonetheless, a great par 3 and a tough test at the end of your round.

The final hole is another beautiful looking hole but a very tough one as well. The tee shot plays downhill and you cannot hit driver as you will end up in the beck that runs across the bottom of the downslope. You do however need to get your ball as near to the hazard as possible and down the left hand side as anything right leaves a blind second shot with an awkward stance. The green is surrounded by bunkers and has a steep slope in the middle of it, which makes for a tough putt no matter where you are on the green. The view of the clubhouse and its gardens to your right is enough to make you forget any bad shots you may have played on this hole and throughout the round.

The course is a relatively long one off the white tees, so it may be a good idea to play off the yellows if you want don’t want too much of a challenge. However, no matter which tees you choose to play off, you will most definitely have a memorable time around this course and it is probably the nearest you’ll get in England to playing on greens with slopes similar to Augusta National.

Allendale Golf Club
Northumberland from £7.00 Save 8%