AND so it begins again...it was a year ago that Andy Sullivan found himself walking on air after coming from nowhere to win the South African Open - it proved to be the first of three tournament victories for the popular Englishman but this was the most remarkable of them because it was so unexpected.

Sullivan has now taken his game - and his life - to a different level. He battled tooth and nail with Rory McIlroy at the Dubai World Championship before finishing second, he is comfortably established in the top 50 in the world rankings and will compete in The Masters at Augusta in April. It is the stuff of fairytales for Sullivan.

But he is unlikely ever to forget that this is where it all started from him. In fact, he won twice in South Africa in 2015, so conditions clearly suit him. Many Europeans struggle on the grainy greens, but not Sullivan. For all of the above reasons, it would come as no surprise whatsoever if he were to make a successful defence of his title this coming week. 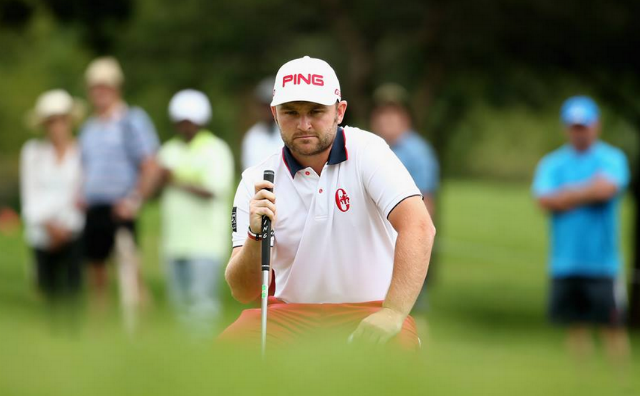 However, he will have to see off three of South Africa's finest golfers in Branden Grace, Jaco Van Zyl and George Coetzee if he is to achieve this feat. Grace is another who raised his game in 2015 - the difference between him and Sullivan is that Grace was already a proven winner and his sights were set higher from day one. He came close at both the US Open and US PGA championship and will feel that his first major is now overdue. The only part of his game that can be suspect is his putting, and it is alarming to see a golfer in his 20s adopt the claw grip with the short stick - but it works. We should make the most of a ny opportunity we get to watch him as he will be plying his trade on the PGA Tour this year, where he is certain to be a winner.

Coetzee is another who has it all, apart from one weakness. At times, his chipping can be abysmal. He hits the ball miles, is a wondrous iron player and he putts like a dream but when he misses the putting surface, anything can happen, and it usually does. But he always plays well in front of his home fans, and is sure to be a contender.

Van Zyl swings the club with a rhythm to die for. Why he doesn't win three or four times a year is one of golf's mysteries. Every shot seems effortless, and that's because it is. You get the feeling that if were ever to start a season well then there would be no stopping him.

And the same applies to another South African you may not have heard of yet - but you surely will. Brandon Stone is just 22 years old and the fact that he is managed by IMG tells you everything you need to know. This boy can play.

Speaking of boys who can play, keep an eye on Sebastian Gros, who was one of the stars of the Challenge Tour in 2015, where he won twice. He is just the latest in a long line of brilliant golfers being produced by France. At 26, he is probably the perfect age to start his European Tour career. He has certainly served his apprenticeship. Gros is capable of producing some incredibly low scores.

And keep a special eye on Simon Dyson, making his return to the tour after finally recovering from a debilitating wrist injury that almost ended his career. Dyson has rediscovered his appetite for the game and that makes him one to watch. he won't contend this week, but expect to see him back in the frame again very soon.

Each Way - Brandon Stone. A star of the future

Andy Sullivan. Hoping to carry on where he left off

Brandon Stone. Has the lot

Sebastien Gros. Will surely succeed with the big boys

George Coetzee. Has he sorted out that dodgy short game?

David Howell. Coming back to his best