Tiger at 40 - His career by numbers 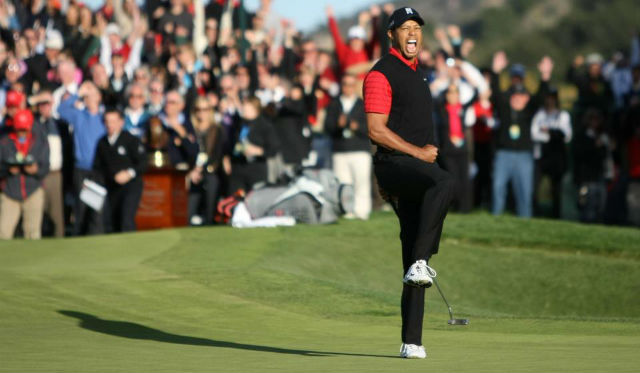 14 – Number of major victories, starting with The Masters in 1997 and the most recent being the 2008 US Open. He remains four behind Jack Nicklaus’ overall record of 18.

15 – Largest winning margin, at the 2000 US Open at Pebble Beach. Woods has won five other tournaments by double-figure margins including the 1997 Masters (12 strokes).

683 – Record number of weeks spent at world number one, the equivalent of more than 13 years. Greg Norman (331) is next on the list.

-25 – Lowest 72-hole score in relation to par, achieved at the Johnnie Walker Classic in 2000 and WGC-American Express Championship in 2002.

900 million US dollars – Estimated earnings (in pounds sterling) since turning professional in 1996, according to most recent figures published by Forbes. Barely 10% of this figure comes from prize money, with most of it  from endorsements. Many large companies – with Nike being a notable exception – have now left Woods but he still earns more than £30m per year off the course.

3 - successive victories in the US Amateur championship

1 – Number of Ryder Cup victories. Woods’  success over the years has not rubbed off on the United States team in the Ryder Cup.  Incredibly, the only time he has played on a winning side was at Brookline in 1999. This has led to criticism that he is not a true team player but he has lost only one singles match in seven appearances, to Costantino Rocca in 1997. His record in foursomes and fourballs, however, is instantly forgettable