Tiger at 40 - His greatest achievements

The career of Tiger Woods has been quite remarkable, but we have chosen three highlights that mark him out as the unique talent that he brought to the game - The Tiger Slam, his first Masters win in 1997 and his win in the US Open in 2008, which is the last of his 14 major triumphs. We leave it to you to decide which is the most remarkable. 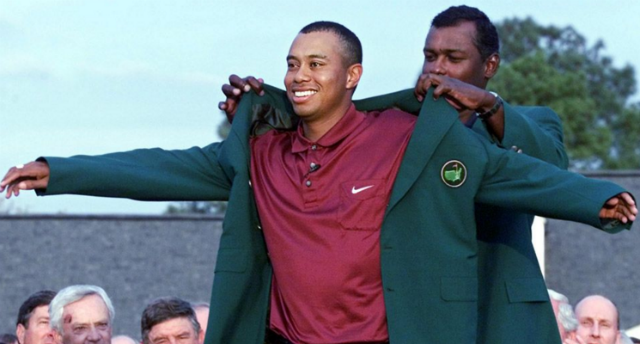 Tiger Woods’ career has had many peaks but the pinnacle came over 11 months between 2000 and 2001 when he was, for a while, unbeatable.

The American was only five years into his professional career when he completed his own clean sweep of the majors by winning the Masters to hold all four of golf’s premier titles at the same time.

Woods had already won two majors but his triumph at Pebble Beach was something else entirely. He finished 12 under par – a record for the US Open – and his 15-stroke winning margin was the best at any major. “Records are great, but you don’t really pay attention to that. The only thing I know is I got the trophy sitting right next to me,” said Woods.

And so he went to the Old Course at St Andrews, where victory meant he had won all four majors in his career. Incredibly, Woods avoided every bunker on the most famous golf course in the world. He won by eight strokes and set an Old Course record, 19 under for 72 holes. “It’s the ultimate. Having won the US Open and The Open is amazing. I’m fortunate to have achieved this feat so early in my career,” said Woods.

Yet again, Woods won with a record-equalling 72-hole total of 18 under par, but he wasn't the only one to play brilliantly that week. He held the lead or joint-led for the first three rounds but had to hole a six-foot putt at the 72nd hole to get into a play-off against Bob May. Woods won the three-hole playoff.. “To win three majors in a row doesn’t happen very often. It’s only happened, professional majors, to two guys, and I’m one of them,” said Woods.

Woods opened with a 70 to lie five off the lead but rounds of 66 and 68 meant he led going into the final round at Augusta. There was never any doubt about the outcome. He fired a final round in the 60s to see off saw the challenge of Phil Mickelson and David Duval and win by two. “To win four consecutive majors, if you look at my career, I don’t think I have ever accomplished anything this great,” Woods said.

In his first full year as a professional, Woods played the opening nine holes in 40 shots, which was four over par. And then he remembered who he was, where he was and what was supposed to happen. He broke every record in the book. His 72-hole winning total of 18 under par was a record. His winning margin of TWELVE shots was a record. And at 21, he was the youngest ever winner. He brought Augusta to its knees and changed the game of golf forever

Woods was there or thereabouts for all 72 holes at Torrey Pines, just outside San Diego on the magnificent coast of California. But he wasn't to have things his own way. Rocco Mediate, a relative journeyman who had suffered years of back pain, stayed with Woods, who had to hole a series of wondrous putts to keep in touch. They were tied after 72 holes. And they were still tied after 90 holes. Finally, Woods won the tournament (his 14th major) at the 91st hole. It later emerged that he had played, and won, the tournament on a broken leg