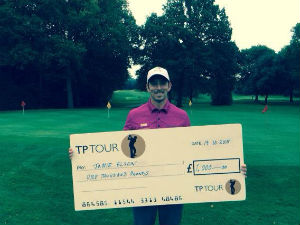 Having recently made it through to the second stage of  European Tour Q-School, Jamie tee'd up on Monday at Thorndon Park in Essex for the TP Tour Championship in confident mood.

Quickly out of the blocks, Elson birdied his first three holes, added a another at the seventh before a bogey at eight had the Jenahura player out in 32 (-3).  With three further birdies on the back nine, Jamie eventually carded 67 (-4) which was good enough to take top spot by a single shot from David Clarkson and Thomas Jordan.

Next stop for Jamie is the EuroPro Tour Championship at Desert Springs, Spain on 28-30 October.  Despite playing in only five EuroPro tournaments this season, Jamie qualified for the season showdown with two top-10 finishes in his last three starts.  A terrific effort and we wish him well for the next couple of weeks.  Well played JE!

For more information on the TP Tour series please visit their website - www.tptourseries.com