Winning the Open Championship at St. Andrews. It is one of the great and most notable feats in sport. The chance for indelible greatness only comes round once every five years, when the very best players in the world are presented with that enticing opportunity to be triumphant in golf’s oldest major championship on the game’s most historic course.

“I could take out of my life everything except my experiences at St Andrews and I would still have had a rich, full life” – Bobby Jones 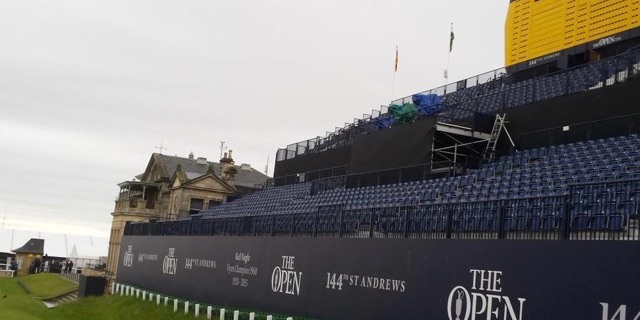 An Open at St. Andrews is just as special as it is timeless. The old town is electrified during the week, becoming almost a carnival of golf with the streets and pubs bustling with activity. There is quite simply no more atmospheric venue in the game, and there certainly isn’t a better one.

“It may be years before I fully appreciate it, but I am inclined to believe that winning The Open at the Home of Golf is the ultimate achievement in the sport” – Tiger Woods in 2000.

With the towering grandstands and massed crowds assembled in front of that famous skyline, dominated by the R&A Clubhouse and Hamilton Hall, the Old Course is transformed during championship week into unquestionably one of the finest stages in sport.

“When the Open is in Scotland, there's something special about it. And when it's at St. Andrews, it's even greater” – Jack Nicklaus.

Though modern equipment has reduced some of its difficulty, particularly in calm conditions, the venerable Old Course remains one of the most intriguingly strategic in the world, continually presenting a fascinating challenge to those fortunate enough to experience it.

There are so many ways to play it. Visitors are traditionally advised to favour the left side off the tee, as it avoids most of the hazards. Understandable. However, taking that safer line will generally result in a more troublesome second shot. In that sense; it is the game’s greatest ‘risk and reward’ course.

Beguiling and complicated, it can take a number of rounds to fully appreciate those subtleties. When the wind picks up or changes direction, the course alters so radically, with bunkers that may have at first glance seemed oddly placed suddenly turning into fearsome obstacles.

Avoiding those traps is paramount to success at St. Andrews. It is a test of both technical execution and sound strategy, best exhibited by Tiger Woods, who, at his peak and on route to completing the career Grand Slam, didn’t find himself in a single bunker during the 2000 Open Championship.

The expansive double greens are the other notable feature of the course. There are seven of them in total, with their width and depth making the judgement of distance all that more tricky on approach shots.

It is a real challenge to get the ball close to the holes on the Old Course, which places great important on a player’s putting ability from long-distances. Just another of those timeless characteristics that make it so unique.

“This is the origin of the game, golf in its purest form, and it's still played that way on a course seemingly untouched by time. Every time I play here, it reminds me that this is still a game” – Arnold Palmer.

A wet summer in Scotland has resulted in the Old Course retaining an unusually green complexion. With further rain forecast to fall throughout the championship, soft conditions will likely prevail, making the ancient links just that bit more receptive and cooperative than it would normally be.

As a consequence, it will become easier to avoid those aforementioned hazards and scoring could be extremely low. However, strong winds are forecast to potentially play havoc during the third round, which could suddenly transform the defenceless old lady into a fearsome and unrelenting beast.

“It is the course you’d want to play if you could only play one for the rest of your life. Everything about it is magical” – Sir Nick Faldo.

It takes a very special player to win on the Old Course. History has shown that to be the case.

St. Andrews has generally found a way to identify the best player in the game at that particular time. Bobby Jones, Sam Snead, Peter Thomson, Jack Nicklaus, Seve Ballesteros, Nick Faldo and Tiger Woods have all triumphantly made that iconic walk up the 18th hole.

So many legendary moments have occurred on these fabled links. And it is ready for some more.

With the unfortunate absence of the injured world number one Rory McIlroy, attention will be fixated even more on the young shoulders of Jordan Spieth, who is attempting to become just the second player in history to win the Masters, U.S. Open and Open Championship in the same year.

Ironically, Ben Hogan, the only player to have achieved that monumental feat, is the one notable name in the game who didn’t have any history at the Old Course. His only experience of the Open was his victorious debut (and final) appearance at Carnoustie.

Spieth, on the other hand, will be attempting to go one step further then Hogan and etch his name into the fabric of the game’s most iconic championship venue.

The 21-year-old has achieved incredible things. Winning at Augusta National and Chambers Bay has placed the Texan on the precipice of making history.  This week, he can take another monumental step in his march towards sporting immortality and the Grand Slam.

And he comes to St. Andrews primed for success having shook off any competitive rust after a three week break by winning the John Deere Classic on Sunday. It was his fifth PGA Tour victory.

Landing in Scotland on Monday, though, has led many reasoned observers to question whether competing in Illinois last week was the correct preparation for someone so determined to win in Fife, with only two full days remaining to adjust to the time difference, the requirements of links golf, and the mapping out such a complex course that he has only played once before.

However, Spieth has already shown that he has a penchant for achieving the remarkable, and he will be fully energised and enthralled by the opportunity he has created for himself. St. Andrews was made for such a triumph.

“If you’re going to be a player people will remember, you have to win the Open at St. Andrews” - Jack Nicklaus

One clear exception to that statement is the great Tom Watson. A five-time winner of the Claret Jug at Carnoustie, Turnberry, Muirfield, Royal Troon and Royal Birkdale, but not at St. Andrews. A triumph on the Old Course remained elusive, with a narrow loss to the charismatic Seve Ballesteros in 1984 denying the legendary American a record sixth victory.

31 years later, however, all eyes this week will be on the 65-year-old from Kansas, who, courtesy of a special exemption from organisers, will take his final bow in the championship that has defined his incredible career. Though a celebratory occasion, there will be more than a tinge of sadness.

Watson’s enduring popularity with the Scottish galleries will ensure that his final walk across the iconic Swilcan Bridge will stir emotions reminiscent of Jack Nicklaus’ own farewell a decade ago.

“This is the place I want to finish my career playing The Open Championship” – Tom Watson.

As golf’s oldest major championship returns to its most historic course, it will be a week of celebrating the heritage of the game; one of saying farewell to a great champion of the past, and of crowning another. The Old Course has transcended through all eras. And it will do so once again.

The Open at St. Andrews. A truly grand occasion.