THERE had been a sense of anti-climax at the BMW PGA championship after Rory McIlroy failed to make the cut and a number of players criticised the quality of the greens. But that was all forgotten on a day of sensational scoring and some astonishing shots in a dramatic third round.

Pick of the day was Tommy Fleetwood's second to the par five fourth hole. He struck a seven iron and watched in disbelief as the ball disappeared into the hole for an albatross. It helped the young Lancastrian to reach the turn in 31 and he came back in 34 for a stunning 65 that moves him to 11 under par, just three behind the joint leaders, Francesco Molinari and Byeong Hun An, of South Korea. 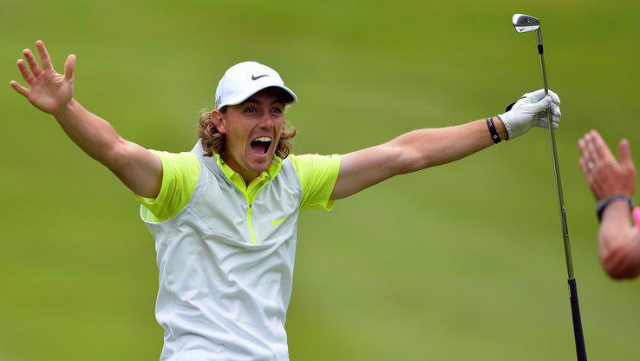 An, the youngest ever winner of the US Amateur Championship in 2009,  had a five-under-par of 67 to catch Molinari, who has led since the first round. Former Ryder Cup player Molinari carded five birdies and one bogey in his round of 68 to keep his challenge going, but there were some fireworks in the groups ahead of the final pairing.
There was another piece of history for the evergreen Spaniard Miguel Angel Jimenez, the oldest winner on The European Tour. The 51-year-old, who came close to winning last week's Spanish Open, had a hole in one at the second hole for the 10th hole in one of his European Tour career – the most by any player, beating Colin Montgomerie’s previous record of nine.

It was his third hole in one of the season, and second in consecutive weeks - he won 288 bottles of beer for achieving the feat in Spain. Jimenez birdied the 18th for a round of 68. It took him to 10 under par for the tournament and into fifth place, a shot behind Fleetwood, while Thailand’s Thonagchai Jaidee is third on 12 under par, two shots behind the leading pair, after a third round of 68.
Molinari admitted that he was beginning to feel the pace after being out in front for so long. “It's not easy to lead a tournament from the first day. Obviously it's the ideal position, but you've got guys coming for you and today I could hear the roars for the eagles and albatross. It was another good day. I played solid and only had one dropped shot which is the main thing,” he said.

An was delighted with his day. “I started with a birdie, tap?in birdie, so it was a good start to the day. I was really consistent all day. I hit it well and then missed a couple of shots, which is possible on this course. But overall I played great today," he said. "I was nervous, but more excited than nervous. That's what I felt this morning. I was really looking forward to playing today. I was in the last group and now tomorrow as well.”

And Fleetwood, seeking the biggest win of his career, was delighted with his albatross. “That's about as good as you can play a hole of golf really (on the fourth), and it was a good move early on. I had a really good drive, 198 to the pin, a little downbreeze, a little off the right and it was a perfect seven iron," he said. “Obviously you take it on the green and try to give yourself a chance of an eagle but once it pitched and moved left, it always looked good but I had no idea it was going to go in and we were pretty excited about that one.”

Jimenez believes he can still win the tournament. "I have been very prolific this year. This is my third one this year with Abu Dhabi, Spanish Open last week, and now here, and also a couple of times from the middle of the fairway. That means that my irons, they are like darts," he said. “I break so many records. I’m still winning tournaments, this year not yet but I’m coming, but now with the hole-in-ones, it's nice. It's nice to feel the way I feel.”