Over the course of the last week, both the European and USA captains for the 2016 Ryder Cup at Hazeltine were announced. Darren Clarke and Davis Love III will lead their respective continents next year as the Americans bid to avoid a fourth successive loss, and a 9th defeat in the last 11 contests. But did the selection committees make the right decisions? Below, I give my views on both appointments…

When the European Tour Ryder Cup selection committee convened at Wentworth Golf Club last week, only one outcome looked likely. Padraig Harrington and Thomas Bjorn were labeled as too young, leaving the gregarious Miguel Angel Jimenez as the only real alternative. I just feel his inability to communicate and articulate effectively, coupled with his 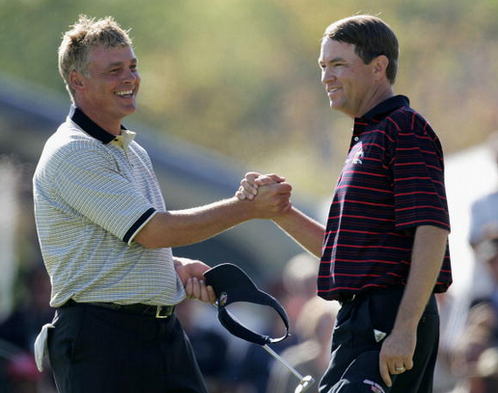 There can be no doubt Clarke deserves the captaincy. It’s given on the grounds of appropriate attributes, of course, but service to the European Tour and skill as a player also come into it. It’s the ultimate honour bequeathed on someone who has represented the European circuit for a number of years, and done so with distinction. Clarke has been a member since 1991 and won 14 times, including that memorable victory in the 2011 Open Championship at Royal St George’s. In short, he’s earned the captaincy through a long and illustrious playing career.

He’s also got the requisite experience to do a great job. He played, and continues to play, all around the world. He understands what’s required to win in America, he’s adept at dealing with the most pressure-filled situations (The Open, and his defeat of Tiger Woods in the final of the 2000 WGC-Matchplay spring to mind as apposite examples) and he’s an indefatigably determined competitor whose desire to win burns deep.

His Ryder Cup playing record is also sensational. In six events, he only tasted defeat on one occasion (Brookline in 1999). His 10-7-3 record - with a win percentage of 57.5 - is one of the best in modern Ryder Cup history and his emotional connection with the biennial contest will never wane. Who could forget the tear-jerking scenes as he made his way to the first tee in 2006 just weeks after the death of his wife, or the image of tears streaming down his face following his victory over Zach Johnson in the Sunday singles? He’s also accustomed to the non-playing side of the Ryder Cup, having been a vice-captain at both Celtic Manor in 2010 and Medinah in 2012. He’s been involved with the Ryder Cup, as a player or assistant, on eight occasions, and only come out second best on one occasion.

Crucially, he also commands great respect. In fact, as many as eight of the 2014 team came out in public support of the Ulsterman in a display of solidarity that undoubtedly forced the committee’s hand. He already enjoys close relationships with several key European players – including Lee Westwood and Rory McIlroy – and his stern yet approachable demeanor is an ideal combination for Ryder Cup captaincy. His popularity in America and the fact he still plays regularly on tour – something seen as one of the key issues of Tom Watson’s captaincy – add further strings to his bow.

My only concerns relate to his patience and media relations, but he’s experienced enough to realise all that Ryder Cup captaincy entails. Overall, Clarke looks a very shrewd appointment.

After Tom Watson’s catastrophic failure at Gleneagles, Davis Love III seems like a logical choice. His team led 10-6 heading into the Sunday singles at Medinah – a deficit that would have been larger without Ian Poulter’s heroics on Saturday afternoon.  He wasn’t a flawless captain – his decision to rest the inspired pairing of Phil Mickelson and Keegan Bradley and his singles order rightly attracted some criticism – but, on balance, he’s a good choice.

The new vice-captain structure the Americans have adopted also makes a lot of sense. Under the proposal put forward by the Task Force, two of the four assistants will be former Ryder Cup captains, while the other two will be people with ample experience in the biennial contest. The committee’s decision to allow the captain more time to select his wildcard picks also has merit. Three will now be selected after the BMW Championship – the third event of the FedEx Cup Playoffs – with the final selection made after the season-ending Tour Championship. Last year, FedEx Cup champion and two-time play-off winner Billy Horschel and Deutsche Bank champion Chris Kirk were sat at home as a woefully out of sorts Webb Simpson skied his first tee shot 100 yards.

The recommendations of the Task Force are logical, but I just can’t fathom why they process was so much more ostentatious than it needed to be. It’s not rocket science why the USA has lost the last three Ryder Cups – less heart than the Europeans, an inferior team on paper, a worse team spirit and poor form in the singles. I can’t help but feel Watson’s awful captaincy caused the PGA of American to overlook the many positives from the previous two Ryder Cups. A Hunter Mahan half-point in his match against Graeme McDowell at Celtic Manor would have retained the trophy for the USA, and only one of the greatest comebacks in the history of sports prevented an American triumph in 2012. They were comprehensively outplayed in 2014, of that there’s no doubt, but they could quite easily have won three consecutive Ryder Cups from 2008.

The high-profile Task Force and a constant rhetoric surrounding the importance of winning the trophy back in 2016 will surely lump more pressure on a team who will already be under immense scrutiny. I like the choice of Love III as captain, but you can’t help feel the position is a poisoned chalice, not dissimilar to being manager of England’s football team. I wonder what drastic measures will be taken should the USA fail to triumph at Hazeltine. Good luck Davis, it’s a thankless task.